He competed in the team foil and individual épée events at the 1936 Summer Olympics. [1]

He finished his secondary education in 1930. After studies in bacteriology in London from 1933 to 1934 and Paris from 1934 to 1935, he took the cand.med. degree at the University of Oslo in 1939. He then studied internal medicine at the University of Minnesota from 1939 to 1940. During the Second World War he was the head physician in Little Norway from 1940 to 1941, then at the Health Office for Seamen in New York City from 1941 to 1943. He then worked at the Norwegian embassy in the United States for one year, then the Ministry of Social Affairs-in-exile from 1944 to 1945. After the war he studied at the Johns Hopkins University, Baltimore from 1946 to 1947. [2]

He was a consultant for the United Nations from 1947, and was a physician for the World Health Organization in Geneva from 1948 to 1956. In 1956 he was promoted to chief physician in the department of treponematosis. [2] He also worked with combatting the disease yaws. [4] In 1963 he was acting director of infectious diseases in the World Health Organization. In 1971 he was hired in the private sector as corporate chief physician of Elkem. [2]

Paul Benjamin Vogt was a Norwegian politician of the Conservative Party who served as a member of the Council of State Division in Stockholm 1903–1904, Minister of Trade and Minister of Auditing 1904–1905. In 1905, he was Norway's emissary to Stockholm to negotiate Norwegian independence from Sweden. He also served as the Norway's minister in London 1910–1934.

Fredrik Ramm was a Norwegian journalist. 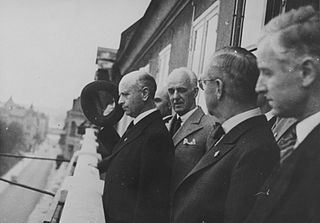 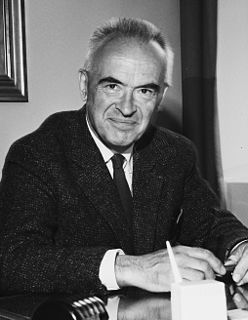 Karl Evang was a Norwegian physician and civil servant.

Harald Juell was a Norwegian diplomat, ambassador and military officer.

Annæus Schjødt was a Norwegian lawyer. He is best known as the prosecutor of Vidkun Quisling.

Annæus Schjødt was a Norwegian barrister.

Jens Gram was a Norwegian barrister and politician.

Rolf Hauge was a Norwegian army officer with the rank of colonel. Having participated in the 1940 Norwegian Campaign, opposing the German invasion of Norway, he later served with the Norwegian Armed Forces in exile, commanding No. 5 Norwegian Troop of the No. 10 (Inter-Allied) Commando.

Johan Didrik Schlömer Beichmann KBE was a Norwegian military officer, journalist and businessman. A resistance pioneer during the German occupation of Norway, he fled to London and eventually served as head commander of the Norwegian Army-in-exile.