Thorsten Schäfer-Gümbel (né Schäfer, born 1 October 1969) is a German politician of the SPD.

He is currently the leader of the opposition SPD party bloc in the Hessian state parliament. He lost his bid for the office of Minister-President of Hesse in the January 2009 Hessian state election, where he had challenged incumbent Roland Koch (CDU). [1] Schäfer-Gümbel has been deputy leader of the SPD since December 2013. He is one of three ad interim successors of former SPD leader Andrea Nahles in the transition phase until a new leader will be voted in later in 2019. [2]

Schäfer-Gümbel was born to a West German soldier stationed in the far south of Bavaria in Oberstdorf. However, he grew up in Hesse in the city of Gießen. He briefly studied Agrarian Science at Justus-Liebig-University Gießen, after which he changed to Political Science. Supported by a scholarship of the Friedrich Ebert Foundation, he graduated with a Master's degree in 1997, he took various minor political positions. He is married and has three children.

Schäfer-Gümbel was involved with the Social and Youth department of Gießen from the late 1990s. He became a local adviser to the SPD, a party which he had joined at the age of 17, and was also a local delegate of the SPD in the local government (Kreistag) in Gießen. He quickly moved up the ranks in the Hessian SPD party machine, and was a candidate on the SPD party list during the 2003 Landtag election. He gained a seat in 2003, and has been a member of the Hessian Landtag ever since. He was re-elected in the 2008 Landtag election and in the 2009 special election; however he was elected as part of the party list and not on a direct mandate, as he lost his local race to the CDU candidate.

In late 2008, following a political crisis and Andrea Ypsilanti's resignation, Schäfer-Gümbel became the SPD's party leader in Hesse and the SPD candidate for minister-president of Hesse. However, the SPD fared poorly in the subsequent 2009 special election, which allowed the CDU's Roland Koch to remain in office. Schäfer-Gümbel has been party leader of the opposition SPD since 29 January 2009. Schäfer-Gümbel was a delegate to the Federal Convention for the purpose of electing the President of Germany in 2009, 2010, 2012 and 2017.

In the negotiations to form a Grand Coalition of Chancellor Angela Merkel's Christian Democrats (CDU together with the Bavarian CSU) and the SPD following the 2013 federal elections, Schäfer-Gümbel was part of the SPD delegation in the working group on energy policy, led by Peter Altmaier and Hannelore Kraft. [3]

In March 2019, Schäfer-Gümbel announced that he would resign from active politics by the end of the year and instead join the management board of German development agency GIZ. [4] 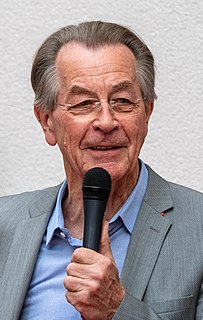 Franz Müntefering is a German politician and industrial manager. He was Chairman of the Social Democratic Party (SPD) from 2004 to 2005 and again from 18 October 2008 to 13 November 2009. He served as Federal Minister of Labour and Social Affairs, as well as Vice-Chancellor, from 2005 to 2007. 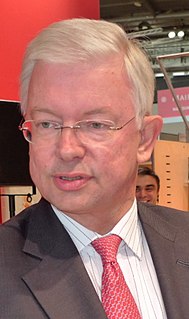 Roland Koch is a German jurist and former conservative politician of the CDU. He was the 7th Minister President of Hesse from 7 April 1999, immediately becoming the 53rd President of the Bundesrat, completing the term begun by his predecessor as Minister President, Hans Eichel, until his resignation on 31 August 2010. During his time in office, Koch was widely regarded as one of Chancellor Angela Merkel's main rivals within the CDU.

Kurt Beck is a German politician (SPD), who served as the 7th Minister President of Rhineland-Palatinate from 1994 to 2013 and as the 55th President of the Bundesrat in 2000/01. On 14 May 2006 he succeeded Matthias Platzeck as chairman of the German Social Democratic Party (SPD). He resigned from that post on 7 September 2008.

Franz Josef Jung is a German politician of the Christian Democratic Union (CDU). He became Federal Minister of Defence in the Grand coalition cabinet of Angela Merkel on 22 November 2005. In October 2009 he became Minister of Labour and Social Affairs but resigned a month later.

The 2008 Hessian state election was held on 27 January 2008 to elect the members of the Landtag of Hesse. The incumbent Christian Democratic Union (CDU) government led by Minister-President Roland Koch lost its majority. The result of the election was extremely close but inconclusive, with the CDU winning just 3,500 votes (0.1%) more than the Social Democratic Party (SPD). Due to the entrance of The Left to the Landtag, neither the CDU–FDP or SPD–Green bloc garnered a majority. After a year of failed attempts to form government, a new election was held.

Andrea Ypsilanti is a German politician. 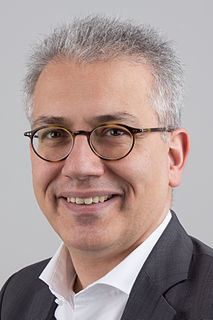 Tarek Mohammed Al-Wazir is a politician in the German Green Party. Since January 2014 he has been deputy to the Hessian prime minister Volker Bouffier, and Hessian Minister of Economics, Energy, Transport and Regional Development. He is a member of the Landtag of Hesse and was co-chair of the Hessian Green Party. 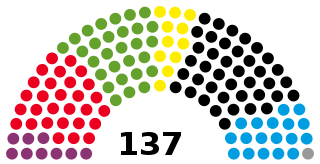 The Landtag of Hesse is the Parliament of the State of Hesse in the Federal Republic of Germany. It convenes in the Stadtschloss, Wiesbaden. As a Legislature it is responsible for passing laws at the state level and enacting the budget. Its most important function is to elect and control the state government. The constitution of the State of Hesse describes the role of the Landtag in §§ 75 to 99.

Thomas Ludwig Albert Oppermann is a German politician and member of the Social Democratic Party (SPD). Since October 2017 he has been Vice President of the Bundestag. He served as First Secretary (2007-2013) and later as chairman (2013-2017) of the SPD Parliamentary Group in the Bundestag.

The 2009 Hessian state election was held on 18 January 2009 to elect the members of the Landtag of Hesse. The election was called after the failure of all government formation attempts conducted after the 2008 state election held a year earlier. The Social Democratic Party (SPD) suffered major losses, falling from an effective tie with the Christian Democratic Union (CDU) to a 13.5 point deficit. The Free Democratic Party (FDP) and The Greens were the primary beneficiaries of the SPD's decline. After the election, the CDU formed a coalition government with the FDP, and Roland Koch was elected Minister-President. 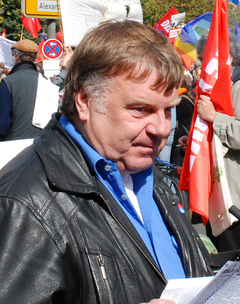 Willi van Ooyen is a German politician of the socialist Linke Party, and current leader of the Linke party's bloc in the Hessian Landtag. He is a self-described "Marxist". 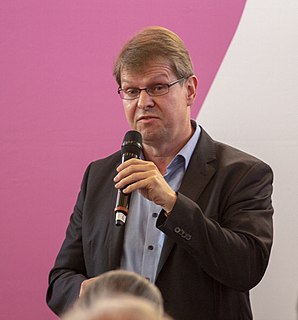 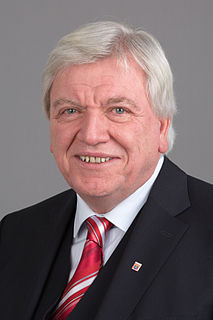 Volker Bouffier is a German politician of the Christian Democratic Union (CDU). Since 31 August 2010 he has been Minister President of the German state of Hesse. From 1 November 2014 until 31 October 2015 he was President of the Bundesrat and ex officio deputy to the President of Germany. He has been chairman of CDU in Hesse since July 2010. From 1999 to 2010, he was minister of interior and sports in the state of Hesse. Bouffier is a lawyer by profession. Because of his participation in state government, he is the longest serving Member of the Bundesrat, representing Hesse since 1999. 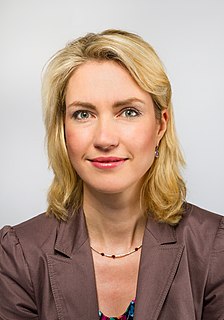 Manuela Schwesig is a German politician of the Social Democratic Party serving as the fifth minister-president of Mecklenburg-Vorpommern since 4 July 2017. She is the first woman to serve as head of government of this state. Previously she served as Federal Minister of Family Affairs, Senior Citizens, Women and Youth from 2013 to 2017.

Peter Michael Tauber is a German politician of the CDU party serving since 2009 as a member of the Bundestag. From 16 December 2013 to 26 February 2018 he served as Secretary General of the CDU.

The 2018 Hessian state election was held on 28 October 2018 to elect the members of the Landtag of Hesse.

The 2019 Social Democratic Party of Germany leadership election took place in the autumn of 2019 to elect the new leadership of the Social Democratic Party of Germany following the resignation of the Andrea Nahles on 3 June 2019. Although the leader(s) of the party are elected indirectly by a party convention, for the first time since 1993 the SPD held a vote by the membership to decide the candidate(s) which the party's executive board will propose to the party convention. Though the convention is not obliged to elect the proposed candidates, the membership vote is considered politically binding. 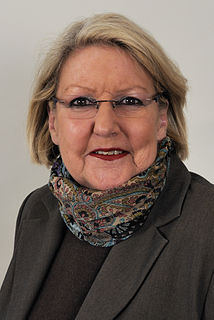 Petra Fuhrmann was a German politician who was a member of the Landtag of Hesse for 20 years.

Dagmar Schmidt is a German politician (SPD). She has served as a member of the Bundestag, the German parliament, since 2013.