Johan Thorsten Sellin (26 October 1896 – 17 September 1994) was a Swedish American sociologist at the University of Pennsylvania, a penologist and one of the pioneers of scientific criminology. [1] [2]

Sellin was born in Örnsköldsvik in Västernorrland County, Sweden and came to Canada with his parents when he was 17 years old. He received his bachelor's degree from Augustana College in Illinois when he was 19. He went on to receive a master's degree and doctoral degree in sociology from the University of Pennsylvania. He taught at the University of Pennsylvania from 1922 until becoming Professor Emeritus in 1967. [2] [3]

Dr. Sellin came to prominence in the 1920s and 30s for his studies in the use of criminal statistics at local, state, national and international levels. He later helped draft the U.S. Uniform Criminal Statistics Act in 1944. An expert on crime statistics, he advised the Federal Bureau of Investigation about statistical matters and was a consultant to the Bureau of the Census on criminal statistics. He also headed, or was a member of, various United Nations panels of experts on criminological questions. Dr. Sellin was a visiting professor or lecturer at Princeton, the University of California at Berkeley, Oxford and other universities. [4]

Gary Kleck is a criminologist and the David J. Bordua Professor Emeritus of Criminology at Florida State University.

Largely based on the writings of Karl Marx, conflict criminology holds that crime in capitalist societies cannot be adequately understood without a recognition that such societies are dominated by a wealthy elite whose continuing dominance requires the economic exploitation of others, and that the ideas, institutions and practices of such societies are designed and managed in order to ensure that such groups remain marginalised, oppressed and vulnerable. Members of marginalised and oppressed groups may sometimes turn to crime in order to gain the material wealth that apparently brings equality in capitalist societies, or simply in order to survive. Conflict criminology derives its name from the fact that theorists within the area believe that there is no consensual social contract between state and citizen.

Marxist criminology is one of the schools of criminology. It parallels the work of the structural functionalism school which focuses on what produces stability and continuity in society but, unlike the functionalists, it adopts a predefined political philosophy. As in conflict criminology, it focuses on why things change, identifying the disruptive forces in industrialized societies, and describing how society is divided by power, wealth, prestige, and the perceptions of the world. "The shape and character of the legal system in complex societies can be understood as deriving from the conflicts inherent in the structure of these societies which are stratified economically and politically". It is concerned with the causal relationships between society and crime, i.e. to establish a critical understanding of how the immediate and structural social environment gives rise to crime and criminogenic conditions. 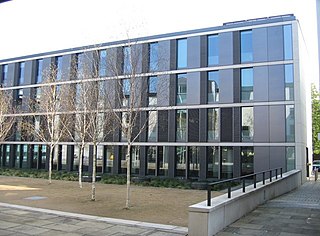 The Institute of Criminology is the criminological research institute within the Faculty of Law at the University of Cambridge. The institute is one of the oldest criminological research institutes in Europe, and has exerted a strong influence on the development of criminology. Its multidisciplinary teaching and research staff are recruited from the disciplines of law, psychiatry, psychology, and sociology. It is located on the Sidgwick Site in the west of Cambridge, England. The Institute of Criminology building was designed by Allies and Morrison. The institute is also home to the Radzinowicz Library, which houses the most comprehensive criminology collection in the United Kingdom. The institute has approximately 50 PhD students, 30-40 M.Phil students, and 200 M.St students. The institute also offers courses to Cambridge undergraduates, particularly in Law, but also in Human Social and Political Sciences and in Psychology and Behavioural Sciences. 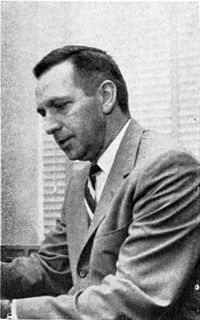 Donald Ray Cressey was an American penologist, sociologist, and criminologist who made innovative contributions to the study of organized crime, prisons, criminology, the sociology of criminal law, white-collar crime.

The American Academy of Political and Social Science (AAPSS) was founded in 1889 to promote progress in the social sciences. Sparked by Professor Edmund J. James and drawing from members of the faculty of the University of Pennsylvania, Swarthmore College, and Bryn Mawr College, the Academy sought to establish communication between scientific thought and practical effort. The goal of its founders was to foster, across disciplines, important questions in the realm of social sciences, and to promote the work of those whose research aimed to address important social problems. Today the AAPSS is headquartered at the Annenberg Public Policy Center at the University of Pennsylvania in Philadelphia and aims to offer interdisciplinary perspectives on important social issues.

Jonathan Simon is an American academic who is the Lance Robbins Professor of Criminal Justice Law and former Associate Dean of the Jurisprudence and Social Policy Program at the UC Berkeley School of Law. Simon’s scholarship concerns the role of crime and criminal justice in governing contemporary societies, risk and the law, and the history of the interdisciplinary study of law.

David Garland is Arthur T. Vanderbilt Professor of Law and professor of sociology at New York University, and professorial fellow in Criminology at Edinburgh Law School. He is well known for his historical and sociological studies of penal institutions, for his work on the welfare state, and for his contributions to criminology, social theory, and the study of social control.

Freda Adler is a criminologist and educator, currently serving as Professor Emeritus at Rutgers University and a visiting professor at the University of Pennsylvania. She was President of the American Society of Criminology in 1994-1995. She has acted as a consultant to the United Nations on criminal justice matters since 1975, holding various roles within United Nations organizations. A prolific writer, Adler has published in a variety of criminological areas, including female criminality, international issues in crime, piracy, drug abuse, and social control theories.

Susanne Karstedt is a German criminologist. She is a professor in the School of Criminology and Criminal Justice at Griffith University in Queensland, Australia.

Punishment and Social Structure (1939), a book written by Georg Rusche and Otto Kirchheimer, is the seminal Marxian analysis of punishment as a social institution. It represents the 'most sustained and comprehensive account of punishment to have emerged from within the Marxist tradition’ and ‘succeeds in opening up a whole vista of understanding which simply did not exist before it was written'. It is a central text in radical criminology, and an influential work in criminological conflict theory, cited as a foundation text in several major textbooks. It offers a broader (macrosociological) level of analysis than many micro-analyses that focus on the atomised and differentiated individual.

Marvin Eugene Wolfgang was an American sociologist and criminologist. 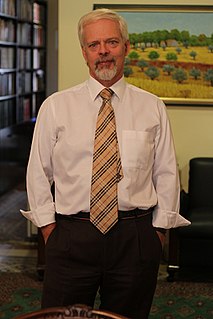 Nestor Courakis is Emeritus Professor of Criminology and Penology at the National and Kapodistrian University of Athens, Faculty of Law and a full-time Professor at the University of Nicosia. 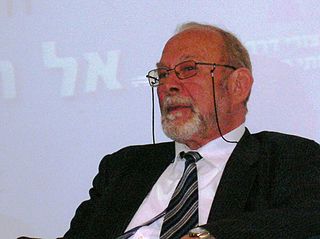 Shlomo Giora Shoham received the Israel Prize in the category of Criminology Research in 2003, one of the first two criminologists to do so along with Menachem Amir.

Per-Olof Helge Wikstrӧm is Professor of Ecological and Developmental Criminology at the University of Cambridge, Professorial Fellow of Girton College and Principal Investigator of the Peterborough Adolescent and Young Adult Development Study (PADS+), a major ESRC funded longitudinal study of young people in the UK which aims to advance knowledge about crime causation and prevention. His main research interests are developing a unified theory of the causes of crime, testing it empirically and applying it to devising knowledge-based prevention policies. His work is internationally acknowledged, as demonstrated by his election as a Fellow of the American Society of Criminology in 2010 and a Fellow of the British Academy in 2011.

David Philip Farrington is a British criminologist, forensic psychologist, and emeritus professor of psychological criminology at the University of Cambridge, where he is also a Leverhulme Trust Emeritus Fellow. In 2014, Paul Hawkins and Bitna Kim wrote that Farrington "is considered one of the leading psychologists and main contributors to the field of criminology in recent years."