Last updated March 07, 2019
This is an Icelandic name. The last name is a patronymic, not a family name; this person is referred to by the given name Þórunn.

Thorunn Ormsdottir (Þórunn Ormsdóttir; died 1431) was the abbess of the Benedictine convent Reynistaðarklaustur in Iceland 1402–1431.

Reynistathar Abbey (Reynistaðarklaustur) was a Catholic monastery in Iceland, belonging to the Order of Saint Benedict and active from 1295 until 1562, when it was closed down during the Icelandic Reformation It was one of nine monasteries on the island, and one out of only two to house nuns, the other one being Kirkjubæjar Abbey. Located in Skagafjörður, it fell under the authority of the Bishop of Hólar.

Thorunn Ormsdottir assumed the position of abbess and took the responsibility of the convent and its lands after the former abbess and several of the nuns died in the Black plague in 1402. She was, however, never formally ordained as such. During the last year of her tenure, her convent was the center of a great scandal, when one of its members, Thora Illugadottir, had a child with the priest Thorthur Hrobjartsson, who was forced by the Bishop to make a pilgrimage to Rome. The couple, however, had another child after his return.

Wilton Abbey was a Benedictine convent in Wiltshire, England, three miles from Salisbury on the site now occupied by Wilton House. It was active from 802 until 1539. It was one of the most powerfull nunneries in Medieval England, and one of only four nunneries to hold a barony alongside Shaftesbury, Barking, and St Mary's Abbey, Winchester. 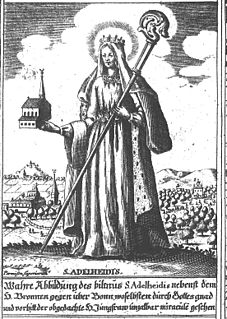 Adelaide, Abbess of Vilich (c. 970 – 5 February 1015, also known as Adelheid, was a German abbess and saint. She was the daughter of Megingoz des Brunharingen, Count of Guelders, and Gerberga of Metzgau, a granddaughter of Charles the Simple, king of the West Franks. 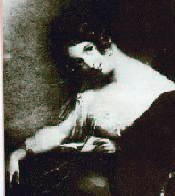 Elizabeth Medora Leigh was the third daughter of Augusta Leigh. It is widely speculated that she was fathered by her mother's half-brother Lord Byron, although her mother's husband Colonel George Leigh was her official father.

Archduchess Maria Anna of Austria was the second child of Francis I, Holy Roman Emperor, and Maria Theresa, Queen of Hungary and Bohemia. As a child, and for a time the eldest surviving child, she was heiress presumptive, but she suffered from ill health and physical disability, and did not marry. In 1766 she became abbess of the Frauenstift in Prague. Soon thereafter she moved to Klagenfurt and remained there for the rest of her life. Her palace in Klagenfurt, the Mariannengasse, now houses the Episcopal Palace. 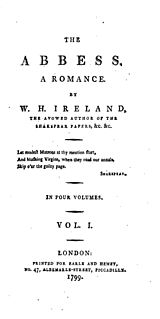 The Abbess: A Romance is a gothic novel by William Henry Ireland first published in 1799. The text was modelled upon Matthew Lewis's The Monk (1796). 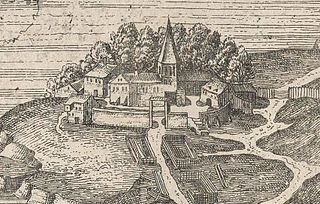 Anna Rheinholdsdotter Leuhusen, was the Abbess of St. Clare's Priory in Stockholm. She became known for her involvement in the Swedish War of Liberation between Sweden and Denmark in the 1520s.

Maria Elisabeth of Austria was the sixth child and the third surviving daughter of Maria Theresa I, Holy Roman Empress and Francis of Lorraine. She was an abbess of the Convent for Noble Ladies in Innsbrück from 1780 until 1806.

Ingegerd Knutsdotter was a Swedish nun and noble, the first official abbess of the Bridgettine Abbey of Vadstena in 1385/88–1403. 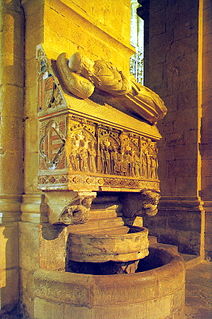 Joanna of Aragon was the second child of Peter IV of Aragon and his first wife Maria of Navarre. She was an Infanta of Aragon by birth and Countess of Ampurias by her marriage. She was a member of the House of Aragon.

Kirkjubæjar Abbey, in operation from 1186 until the Icelandic Reformation, was a monastery in Iceland of nuns of the Order of St. Benedict. It was located at Kirkjubæjarklaustur. Iceland had nine religious communities before the Reformation, two of which were monasteries of nuns, of which this is the first and oldest. 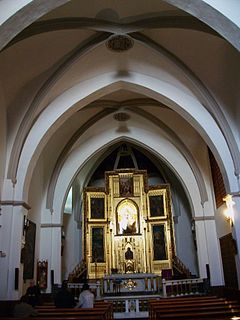 Agnes Jónsdóttir, was the abbess of the Benedictine convent Reynistaðarklaustur in Iceland 1461–1507.

Hallbera Þorsteinsdóttir was the founder and abbess of the convent Reynistaðarklaustur of the Benedictine order on Iceland. 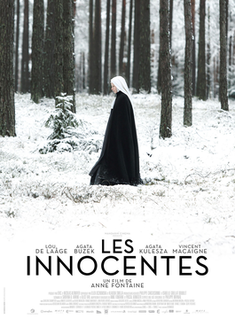 The Innocents, also known as Agnus Dei, is a 2016 French film directed by Anne Fontaine, which features Lou de Laâge, Agata Kulesza, Agata Buzek and Vincent Macaigne in its cast. The script is by Sabrina B. Karine, Pascal Bonitzer, Anne Fontaine and Alice Vial, after an original idea by Philippe Maynial. Maynial took inspiration from the experiences of his aunt, Madeleine Pauliac, a French Red Cross doctor who worked in Poland after World War II, dealing with the aftermath of mass rapes by Soviet soldiers. 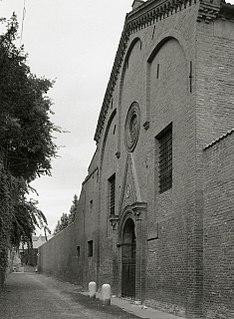 The Corpus Domini Monastery is a monastery at 4 via Pergolato in Ferrara. It first was founded as a house of penitent women, and became a Poor Clares Observant Franciscan convent in 1431. It was the home of Caterina Vigri from 1431-1456. She served as the mistress of novices, teaching about 100 women to become pious nuns. She was also an artist who illuminated her own breviary and is said to have decorated the walls of the convent with images of the Christ Child. These were lost or destroyed in a fire in 1667. The public church was redecorated in the late-Baroque period. On its high altar is Communion of the Apostles by Giambettino Cignaroli (1768), whilst the church's ceiling fresco Glory of Saint Catherina Vegri is by Giuseppe Ghedini (1770–1773). The house is still a monastery; a community of Franciscan nuns, called Poor Clares after S. Clare their founder and companion to S. Francis. One of their abbesses was the daughter of Lucrezia Borgia, Leonara d'Este. She is now recognised as one of the earliest writers of polyphonic choral music for women.

Baugeid Dagsdatter was a Norwegian abbess. She was traditionally the first abbess of the Gimsøy Abbey, one of the first convents in Norway, upon its foundation.