Last updated March 22, 2022
This article is about American admiral. For the American politician, see Thorvald Solberg.

Thorvald A. Solberg was born in Mason, Wisconsin, on 17 February 1894, [1] the son of Norwegian immigrants Thomas and Martha Solberg. [2] In 1905, the family moved to Sandpoint, Idaho, where he graduated from Sandpoint High School in 1911. [3]

Solberg studied electrical engineering at the Naval Postgraduate School, [3] and then attended Columbia University, receiving a Master of Science (M.S.) degree in 1924. [1] In 1931 and 1932 he worked on the development of a boiler compound to prevent the buildup of limescale in ships' boilers. This was approved by the Bureau of Engineering in its 1933 "Standard Navy Boiler Compound Specifications". [4]

During World War II, he was an engineering officer on the staff of the Commander, Battle Force from July 1939 to April 1941. He then went to London as a naval observer. He returned to the United States in March 1944, and served with the Bureau of Ships until October 1946. He was promoted to the rank of rear admiral in 1945, with his seniority backdated to December 1942. [1]

During Operation Crossroads in 1946, Solberg was responsible for preparing the target fleet. [5] As head of the Bureau of Ships' Research and Standards Branch, he was also appointed to the Military Liaison Committee of the Atomic Energy Commission in November 1946. [6] He became the Chief of the Office of Naval Research in 1948, a position he held until he retired in 1951. [3]

Solberg was thrice awarded the Legion of Merit. [3] In 1947, Solberg Inlet in Antarctica was named after him by the Ronne Antarctic Research Expedition (RARE) in recognition of the assistance given to the expedition by Solberg and the Office of Naval Research. [7] He was also appointed Honorary Knight Commander of the Order of the British Empire for his service for the allied cause. [8]

Jesse Barrett "Oley" Oldendorf was an admiral in the United States Navy, famous for defeating a Japanese force in the Battle of Leyte Gulf during World War II. He also served as commander of the American naval forces during the early phase of the Battle of the Caribbean. In early 1942, a secret group of senior Navy officers empaneled by President Franklin D. Roosevelt assessed him as one of the 40 most competent of the 120 flag officers in the Navy.

Rear Admiral William Sterling "Deak" Parsons was an American naval officer who worked as an ordnance expert on the Manhattan Project during World War II. He is best known for being the weaponeer on the Enola Gay, the aircraft which dropped the Little Boy atomic bomb on Hiroshima, Japan in 1945. To avoid the possibility of a nuclear explosion if the aircraft crashed and burned on takeoff, he decided to arm the bomb in flight. While the aircraft was en route to Hiroshima, Parsons climbed into the cramped and dark bomb bay, and inserted the powder charge and detonator. He was awarded the Silver Star for his part in the mission. 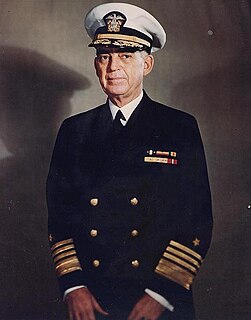 Thomas Cassin Kinkaid was an admiral in the United States Navy, known for his service during World War II. He built a reputation as a "fighting admiral" in the aircraft carrier battles of 1942 and commanded the Allied forces in the Aleutian Islands Campaign. He was Commander Allied Naval Forces and the Seventh Fleet under General of the Army Douglas MacArthur in the Southwest Pacific Area, where he conducted numerous amphibious operations, and commanded an Allied fleet during the Battle of Leyte Gulf, the largest naval battle of World War II and the last naval battle between battleships in history.

Benjamin Franklin Isherwood was an engineering officer in the United States Navy during the early days of steam-powered warships. He served as a ship's engineer during the Mexican–American War, and after the war did experimental work with steam propulsion. Rising to the rank of rear admiral, as Engineer-in-Chief of the Navy during the Civil War, he helped to found the Navy's Bureau of Steam Engineering. 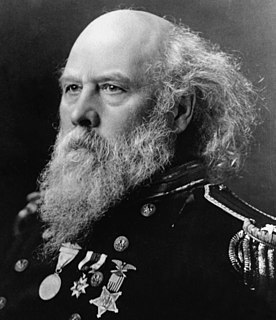 George Wallace Melville was an American engineer, Arctic explorer, and author. As chief of the Bureau of Steam Engineering, he headed a time of great expansion, technological progress and change, often in defiance of the conservative element of the Navy hierarchy. He superintended the design of 120 ships and introduced the water-tube boiler, the triple-screw propulsion system, vertical engines, the floating repair ship, and the "distilling ship." Appointed engineer in chief of the Navy, Melville reformed the service entirely, putting Navy engineers on a professional rather than an artisan footing.

Arthur Schuyler Carpender was an American admiral who commanded the Allied Naval Forces in the Southwest Pacific Area during World War II.

Solberg Inlet is an ice-filled inlet 5 to 10 nautical miles (18 km) wide, which recedes west 14 nautical miles (26 km) between Rock Pile Peaks and Joerg Peninsula, on the east coast of Graham Land. Discovered by members of the United States Antarctic Service (USAS) in 1940, it was resighted in 1947 by the Ronne Antarctic Research Expedition (RARE) under Ronne, who named it for Rear Admiral Thorvald A. Solberg, U.S. Navy, Chief of Naval Research, who was of assistance to the expedition.

Alvin Roubal Luedecke was a United States Army Air Forces general during World War II. He commanded the Armed Forces Special Weapons Project after the war. After retiring from the Air Force in 1958, he was General Manager of the United States Atomic Energy Commission, Deputy Director of the Jet Propulsion Laboratory and President of Texas A&M University. 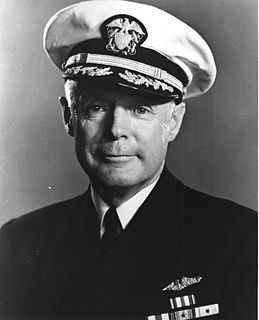 Rear Admiral Herbert James Ray was an officer in the United States Navy who served in World War I and World War II. A 1914 graduate of the Naval Academy, he served on the submarines USS H-2 and N-3 during World War I. In March 1942, as Chief of Staff and Aide to the Commandant of the Sixteenth Naval District, Rear Admiral Francis W. Rockwell, he participated in General Douglas MacArthur's escape from the Philippines. In Australia, he served with MacArthur's General Headquarters, Southwest Pacific Area staff. In September 1943, he became Captain of the battleship USS Maryland, which he commanded in the Battle of Tarawa, Battle of Kwajalein, Battle of Saipan and the Battle of Peleliu. In October 1944, he participated in the Battle of Surigao Strait, in which Maryland joined the other battleships in engaging the Japanese battleships Fusō and Yamashiro and their escorts. Ray left Maryland in December 1944, and was promoted to Commodore and appointed deputy director of the Naval Division of the US Control Group Council for Germany. After VE Day, he became the Junior United States Member of the Tripartite Naval Commission in Berlin. He retired from the Navy on 30 June 1949, and received a tombstone promotion to rear admiral due to his combat decorations. 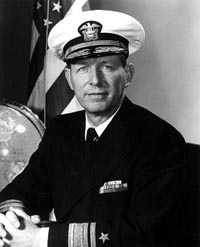 Albert G. Mumma was a rear admiral in the United States Navy who played a pivotal role in the development of nuclear propulsion for warships. During World War II, he served in France and Germany with the Alsos Mission. 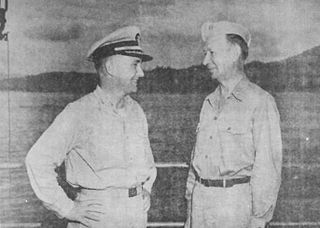 Raymond D. Tarbuck was a rear admiral in the United States Navy who is best known as a planner with General Douglas MacArthur's General Headquarters (GHQ) Southwest Pacific Area during World War II.

Vice Admiral Alfred Eugene Montgomery was an officer in the United States Navy who served in World War I and World War II. A graduate of the Naval Academy, he participated in operations in the Mexican waters during the Mexican Revolution. He trained for submarines, and became executive officer of the submarine USS E-1. In November 1914 he reported to the Mare Island Naval Shipyard where the new submarine USS F-1 was being fitted out, and served as her commander from June 1917 until she was lost on 17 December 1917.

Vice Admiral Frank Jacob Lowry was an officer in the United States Navy who served in World War I and World War II. A 1911 graduate of the United States Naval Academy, he served on submarines during World War I. During World War II, he commanded the cruiser USS Minneapolis at the Battle of the Coral Sea, for which he was awarded the Navy Cross, and the Battle of Midway. He commanded the VIII Amphibious Force in the landings at Anzio and Southern France. He retired from the Navy in March 1950, and received a tombstone promotion to vice admiral due to his combat decorations. 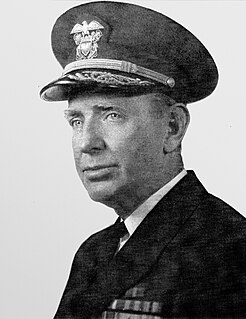 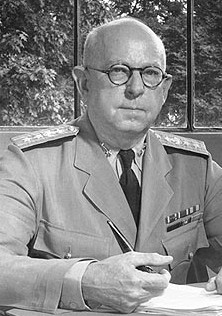 Harold Gardiner Bowen Sr. was a United States Navy Vice admiral, former head of the Office of Naval Research and a mechanical engineer. He was the recipient of the Distinguished Service Medal and he was the namesake of USS Bowen. His son Harold G. Bowen Jr. also became a Vice Admiral, known for his involvement in the inquiry into the Pueblo incident.

Willard Augustus Kitts III was a highly decorated officer in the United States Navy with the rank of Vice Admiral. An ordnance expert and veteran of several campaigns in the Pacific Theater during World War II, he distinguished himself as Commanding officer of heavy cruiser USS Northampton, which was sunk during the Battle of Tassafaronga in November 1942.