Under Stauning's leadership,Denmark,like the other Western European countries,developed a social welfare state, [1] and though many of his ambitions for Social Democracy were ultimately thwarted in his lifetime by events beyond his control,his leadership through grave times places Stauning among the most admired of twentieth-century Danish statesmen.

The Stauning Alps,a large mountain range in Greenland,were named after him. [2]

Member of the Folketing

Stauning was trained as a cigar sorter and soon became involved with trade union activity. From 1896 to 1908 he was leader of the Cigar Sorters' Union (part of the Danish Tobacco Workers' Union,in 1898 –1904 also editor of the magazine Samarbejdet (Co-operation) of the Federation of Trade Unions,and elected Member of Parliament (Folketinget) in 1906. In 1910 he was elected chairman of the Social Democratic Party (Socialdemokratiet),a position he retained for almost thirty years,until 1939. He participated as Minister without Portfolio in the Cabinet of Zahle II from 1916 to 1920.

He was elected to government as prime minister in 1924 for the minority cabinet Cabinet of Thorvald Stauning I which would survive until 1926. His cabinet was considered ground-breaking not only as it was the first purely Social Democratic cabinet,but also because a woman,Nina Bang,was appointed Minister of Education,which attracted some international attention,as she was one of the first female ministers in the world. [3]

From 1929 he led the successful coalition cabinet Cabinet of Thorvald Stauning II with the social liberal Det Radikale Venstre party that would steer Denmark out of the Great Depression,shaping a major political compromise that greatly improved the Danish economy,and also transformed the Social Democratic Party from a class party to a popular party. Under Stauning's leadership Denmark,like the other Western European countries,developed a social welfare state. It is often proposed that the long-lived coalition cabinet actively averted the communist and fascist movements that were sweeping much of Europe from developing a strong following in Denmark.

In January 1933,Stauning's government entered into what was then the most extensive settlement yet in Danish politics—the Kanslergade settlement (Danish :Kanslergadeforliget)—with the liberal party Venstre. [4] The settlement,which was named after Stauning's apartment in Kanslergade in Copenhagen,included extensive agricultural subsidies and reforms of the legislation and administration in the social sector. [5]

Stauning holds a record in Danish politics,in having successfully sought re-election no less than three times (1932,1935 (With the famous slogan "Stauning or Chaos"),1939). However,an attempt to amend the Constitution failed in 1939,as the turnout in the referendum was insufficient to validate the result. This came as a tremendous blow to Stauning,who seemed to lose his previously sure touch for politics thereafter. He reportedly considered resigning in the wake of the referendum failure,but was persuaded to stay on. [6]

Stauning's second cabinet lasted until Operation Weserübung,the Nazi occupation of Denmark began on 9 April 1940,when the cabinet was widened to include all political parties,called the Stauning III Cabinet. Contrary to most other governments of the Nazi-invaded countries,King Christian X of Denmark and his government ordered the army and navy to stop fighting,and chose to remain in their country also under the occupation,which is believed to have contributed to the Nazi leaders being more lenient in Denmark than in other countries under Hitler's control. Stauning died in 1942,deeply depressed about the future of social democracy in a Nazi-dominated Europe.

Like many other workers' leaders of his generation,such as Hjalmar Branting in Sweden,Stauning was a charismatic leader who played an important role in integrating Danish society after the social changes following the Industrial Revolution and common suffrage. His campaign slogan,"Stauning or Chaos," (Danish :Stauning eller Kaos) resonated in a nation undergoing a period of massive unemployment caused by the economic,social and political turmoil of its neighbors and trading partners,notably Denmark's chief trading partner Germany. The following Great Depression brought Danish unemployment to unprecedented heights. This period of widespread social malaise was fertile ground for leaders who could communicate a confident and coherent vision to the masses. Stauning was such a man for Denmark,and his popularity won the Social Democratic Party 46% of the total votes in the 1935 Folketing election,a figure never again reached by any Danish party.

He was given a state funeral in 1942,an honour normally not bestowed on Danish prime ministers. Although Denmark's relationship with Germany during World War II has been controversial,Stauning's legacy in Denmark remains positive. His popularity in the 1930s acted as a force limiting the growth of other populist parties—most importantly,the Nazi party,which remained politically insignificant. Stauning also played a major role in containing the constitutional Easter Crisis of 1920 where he brokered a deal with the king in which the monarch accepted a reduction of his own role to a merely symbolical one,avoiding any future interference in the functioning of parliamentary democracy. In return,Stauning kept the pro-republican elements of the Social Democratic Party in line,and ensured his party's political support to the continuation of the Danish monarchy. His government was also responsible for laying the foundations to the future Danish welfare state.

The prime minister of Denmark is the head of government in the Kingdom of Denmark comprising the three constituent countries:Denmark,Greenland and the Faroe Islands. Before the creation of the modern office,the kingdom did not initially have a head of government separate from its head of state,namely the monarch,in whom the executive authority was vested. The Constitution of 1849 established a constitutional monarchy by limiting the powers of the monarch and creating the office of premierminister. The inaugural holder of the office was Adam Wilhelm Moltke. 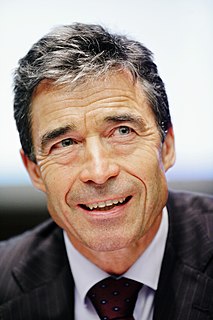 Anders Fogh Rasmussen is a Danish politician who was the 24th Prime Minister of Denmark from November 2001 to April 2009 and the 12th Secretary General of NATO from August 2009 to October 2014. He became CEO of political consultancy Rasmussen Global and founded the Alliance of Democracies Foundation. He serves as a Senior Adviser to Citigroup. He also served as a senior advisor at The Boston Consulting Group. 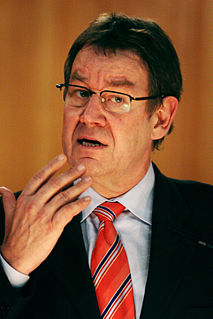 Poul Oluf Nyrup Rasmussen is a retired Danish politician. Rasmussen was Prime Minister of Denmark from 25 January 1993 to 27 November 2001 and President of the Party of European Socialists (PES) from 2004 to 2011. He was the leader of the governing Social Democrats from 1992 to 2002. He was a member of the European Parliament from 2004 to 2009.

Carl Theodor Zahle,Danish lawyer and politician;prime minister of Denmark 1909–1910,1913–1920. In 1895 he was elected member of the lower chamber of the Danish parliament (Folketinget),for the Liberal Party (Venstrereformpartiet). A campaigner for peace,in 1905 he co-founded the Social Liberal Party together with other disgruntled members of Venstrereformpartiet. He continued on as a member of the Folketinget for Det Radikale Venstre until 1928,when he became a member of the upper chamber of parliament (Landsting). In 1929 he became Justice Minister,a post which he held until 1935.

The Danish Social Liberal Party is a social-liberal political party in Denmark. The party was founded as a split from the Venstre Reform Party in 1905. 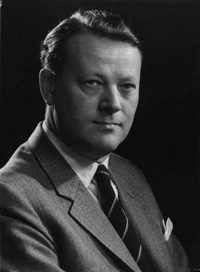 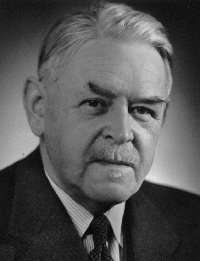 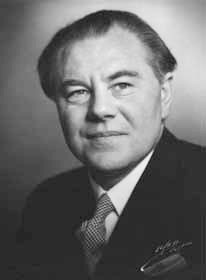 Hans Hedtoft Hansen was a Danish politician of the Social Democrats who served as Prime Minister of Denmark from 1947 to 1950 and again from 1953 until his death in 1955. He also served as the first President of the Nordic Council in 1953.

Erik Eriksen was a Danish politician,who served as Prime Minister of Denmark from 1950 to 1953 and as the fourth President of the Nordic Council in 1956. Eriksen was leader of the Danish Liberal party Venstre from 1950 to 1965. He served as Prime Minister of Denmark from 30 October 1950 to 30 September 1953 as leader of the Eriksen cabinet forming a minority government of Venstre and the Conservative People's Party. Eriksen was a farmer by profession. 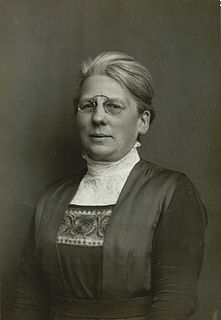 Nina Henriette Wendeline Bang née Ellinger was a Danish social democratic politician and historian. In 1924 she was appointed Minister for Education,becoming the first female minister in an internationally recognized government. She resigned as minister in 1926. 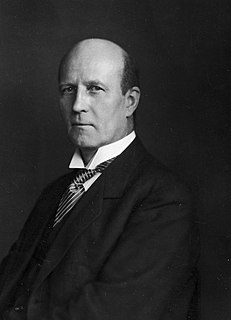 Peter Rochegune Munch was a prominent Danish historian and politician. He was a leading member of the Radikale Venstre,and represented Langeland in parliament.

After the 1901 Danish Folketing election,the Council President Johan Henrik Deuntzer of the Venstre Reform Party became the leader of Denmark's first liberal government. The resulting cabinet,which replaced the Cabinet of Sehested consisting of members of the conservative party Højre,was formed on 24 July 1901 and was called the Cabinet of Deuntzer. The formation of the new cabinet is referred to in Danish as "systemskiftet",the shift of government. 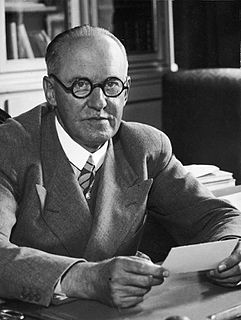 Alsing Emanuel Andersen was a Danish social democrat politician. Andersen served as the Minister of Defense (1935–1940) for Denmark. From 8 July 1940 to 1945,he served as the vice chairman of the Danish Social Democratic Party,and as the acting chairman of the party from the death of Thorvald Stauning until the end of the Nazi occupation of Denmark in 1945. Andersen briefly returned to national politics as the Minister of the Interior from 13 to 23 November 1947. 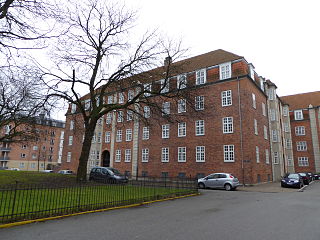 The politics of Denmark take place within the framework of a parliamentary representative democracy,a constitutional monarchy and a decentralised unitary state in which the monarch of Denmark,Queen Margrethe II,is the head of state. Denmark is described as a nation state. Danish politics and governance are characterized by a common striving for broad consensus on important issues,within both the political community and society as a whole.