Thota is an Indian surname found in the states of Andhra Pradesh and Telangana.

People with this surname include:

This disambiguation page lists articles associated with the title Thota.
If an internal link led you here, you may wish to change the link to point directly to the intended article.

Banda may refer to:

Sridhar is a given name that is also sometimes used as a surname. Notable people with this name include:

Pulivendula(2008) is a town in YSR Kadapa district, a district of the Indian state of Andhra Pradesh. According to ancient folklore, its name is derived from "Puli Mandala", which was originally a forested area populated by tigers. It is located in Pulivendula mandal of the Jammalamadugu revenue division. Pulivendula is nearly 65 km away from Proddatur(1915).

Thotapalli or Thota Palli is a village in Nagaram mandal, Guntur District, Andhra Pradesh, India. Located 16 km away from the vidhana sabha constituency Repalle Town, Guntur District of the Indian state of Andhra Pradesh. It is a gramapanchayat of Nagaram mandal. It is situated on the plains at a distance of 15.9071 miles of the Bay of Bengal. Thotapalli's starting name "Thutipilli". Founder Named as "Thuttadu". Here surnames are "Anagani", Govathoti, etc.

Reddy/Reddi is an Indian surname. In India it is predominantly used by members of the Telugu speaking Reddy caste. It is also used as a surname by members of the Reddi Lingayat and Reddy Vokkaliga communities of Karnataka. 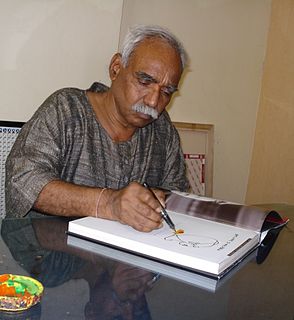 Thota Vaikuntam is an Indian painter. His paintings capture simple lifestyle of villagers like the paddy fields, toddy pots on shoulders of men, the household chores, temple rituals etc. His drawings range from stark charcoal on paper, transparent washes and pencil drawings.

Koneru is a surname. It may refer to:

Kakarla may refer to: Kakarla is a surname in which is predominant in higher castes( Yadav, kapu, khamma, bhrahmin, and Reddy) in the Indian states of Andhra Pradesh and Telangana.

Jalagam is one of the Indian surnames.

T. G. Kamala Devi, also known as Kamala Chandra Babu, was an Indian dubbing artist, playback singer and actor who primarily contributed to Telugu cinema. She was also a former professional level billiards player who won the Indian Women Billiards title twice. She died of a brief illness at Chennai on 16 August 2012.

Jana Sena or Jana Sena Party (JSP) is an Indian Regional political party based in Andhra Pradesh and Telangana, India. It was founded by Tollywood actor and politician Pawan Kalyan on 14 March 2014. Jana Sena means "People's Army" in Telugu. The motto of the party is "fight for the rights of each and every common person".

Thota Narasimham is an Indian politician and a member of parliament from Kakinada, Andhra Pradesh. He won the 2014 Indian general election being a Telugu Desam Party candidate. Thota Narasimham won the elections from Kakinada Lok Sabha seat defeating his young rival Chalamalasetty Sunil of the YSRC.

Thota Sitarama Lakshmi is an Indian politician from Telugu Desam Party who presently represents the party as a Member of Parliament from Andhra Pradesh, India.

Nimmakayala Chinarajappa is an Indian politician from Andhra Pradesh. He is the present MLA of Telugu Desam Party, representing Peddapuram assembly constituency of the Andhra Pradesh Legislative Assembly.

Naidu Thota is a suburb of the city of Visakhapatnam state of Andhra Pradesh, India.

Gopal Krishna Thota is an Indian politician. He was elected to the Lok Sabha, the lower house of the Parliament of India from the Kakinada in Andhra Pradesh as a member of the Telugu Desam Party.

Rayudu/Raidu/Rayalu is a title used by South Indian Telugu castes such as Kapu and Velama.. Rayudu title is native to Andhra Pradesh and Karnataka states in India. Rayudu is a Telugu name and synonym for the word "Royal". The word "Rayudu" means "king", or "a man with rich background". In recent times, young people in Rayalaseema of Andhra Pradesh have been naming themselves "Royal/Rayal" instead of Rayudu/Rayalu.