Thotlakonda was well within the influence of ancient Kalinga, which was an important source of dissemination of Buddhism to Sri Lanka and various parts of Southeast Asia. Also, it is one of the Ports of entry for all the Visitors coming from high Seas to visit all Buddhist prominent places located closely around 83.3 degrees Meridian East. It provides an insight into the process of transoceanic diffusion of Indic culture, especially Buddhism.

A hill on the sea coast with salubrious climate was an ideal attraction for the Buddhist monks to build a monastery complex here. The placid sea sheltered by the deeply in curved coastline here, provided a safe haven for anchoring ships. People coming from far away places to India are well guided by the longitude 83.3 degrees Meridian East. Thotlakonda, Sarnath, Kushinagar and Lumbini happens to lie almost on the same Longitude. Those coming to India by high Seas wanna travel by the shortest distance and so visited Thotlakonda a transit place, anchored their Ships, took rest for some time on the hill and travelled along 83.3 degrees Meridian East to Buddhist prominent places.

Thotlakonda came to light during an aerial survey by the Indian Navy for setting up a naval base. After its discovery, major excavations have been conducted by the Andhra Pradesh State Archaeology Department from 1988 to 1993. The excavations established the existence of a Hinayana Buddhist complex which flourished 2000 years ago. To the south of the complex there is a tank which served as a water source to the inhabitants of the monastery.

Thotlakonda's peak activity was between the 2nd century BCE and the 2nd century CE owing to brisk Roman trade and religious missions sent abroad. Thotlakonda came into existence along with nearby sites in Visakhapatnam like Bavikonda and Pavurallakonda. The lofty stupas shining during the day, with their light lime plaster and with rows of wick lamps during nights, might have served as guiding landmarks of nautical commuters. There appears to have been no royal patronage for this monastery. However traders and local believers seem to have supported the complex. In its heyday, Thotlakonda might have accommodated more than 100 bhikkhus.

Thotlakonda had declined by the end of the 3rd century.

Nalanda was a renowned Buddhist University in the ancient kingdom of Magadha in India. Pali was the main language which was used in the old Buddhist text. Buddhist texts describe it as a Mahavihara, a revered Buddhist monastery.The university of Nalanda obtained significant fame, prestige and relevance during ancient times, and rose to legendary status due to its contribution to the emergence of India as a great power around the fourth century. The site is located about 95 kilometres (59 mi) southeast of Patna, and was one of the greatest centres of learning in the world from the fifth century CE to c. 1200 CE. Today, it is a UNESCO World Heritage Site. 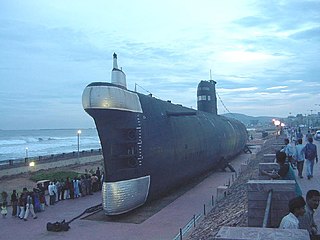 Visakhapatnam, formerly known as Vizagapatam is the proposed executive capital of the Indian state of Andhra Pradesh. It is also the most populated and largest city of Andhra Pradesh. It lies between the Eastern Ghats and the coast of the Bay of Bengal. It is the second largest city in the east coast of India after Chennai and also the fourth largest city in South India. It is one of the four smart cities of Andhra Pradesh selected under Smart Cities Mission. It also serves as the headquarters of Visakhapatnam district. With an estimated output of $43.5 billion, the city is the ninth largest contributor to India's overall Gross domestic product as of 2016. In 2020, Visakhapatnam emerged as the finalist in the World Smart City Awards under Living and Inclusion category. 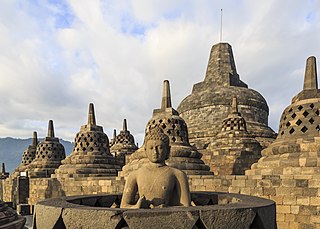 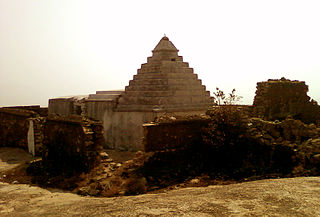 Anakapalle is a suburb of Visakhapatnam in the Indian state of Andhra Pradesh. The municipality was merged with Greater Visakhapatnam Municipal Corporation. It has the second largest jaggery market of the country.

Amadalavalasa is a town in Srikakulam district of the Indian state of Andhra Pradesh. It is a municipality and also the mandal headquarters of Amadalavalasa mandal. The town is spread over an area of 19.65 km2 (7.59 sq mi), which is under the jurisdiction of Visakhapatnam Metropolitan Region Development Authority. Srikakulam Road railway station is situated at Amadalavalasa.

Nagarjunakonda is a historical town, now an island located near Nagarjuna Sagar in Guntur district of the Indian state of Andhra Pradesh, near the state border with Telangana. It is 160 km west of another important historic site Amaravati Stupa. 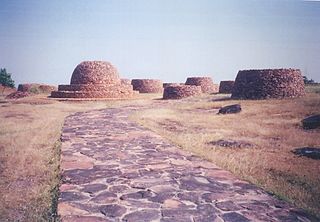 Deorkothar is a location of archaeological importance in Madhya Pradesh, Central India. It is known for its Buddhist stupas and was discovered in 1982.These stupas are credited to the Mauryan emperor, Ashoka. 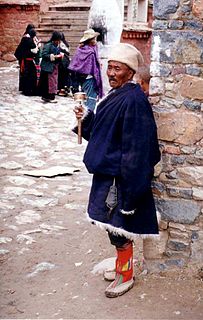 The most important places in Buddhism are located in the Gangetic plains of Northern India and Southern Nepal, in the area between New Delhi and Rajgir. This is the area where Gautama Buddha lived and taught, and the main sites connected to his life are now important places of pilgrimage for both Buddhists and Hindus. However, many countries that are or were predominantly Buddhist have shrines and places which can be visited as a pilgrimage.

Pushpagiri was an ancient Buddhist mahavihara or monastic complex located atop Langudi Hill in Jajpur district of Odisha, India. Pushpagiri was mentioned in the writings of the Chinese traveller Xuanzang and some other ancient sources. Until the 1990s, it was hypothesised to be one or all of the Lalitgiri-Ratnagiri-Udayagiri group of monastic sites, also located in Jajpur district. These sites contain ruins of many buildings, stupas of various sizes, sculptures, and other artifacts.

Nelakondapally, also referred to as Nelakondapalli or Nela Kondapalli, is a town and headquarters of a mandal in Khammam district, Telangana, India. It is also an archaeological site important to early Buddhism and Hinduism, where excavations have discovered a major stupa site near an ancient manmade lake, another site where Buddhist and Hindu artwork were carved in pre-3rd century India, both sites also yielding hundreds of ancient rare coins with Shaiva and Vaishnava inscriptions from the Hindu dynasties of Ikshavakus and Vishnukundins. Nelakondapally is also the birthplace of Bhakta Ramadas. 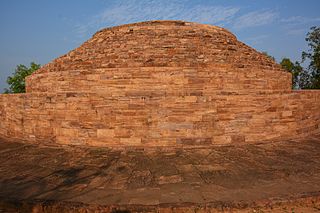 Lalitagiri is a major Buddhist complex in the Indian state of Odisha comprising major stupas, 'esoteric' Buddha images, and monasteries (viharas), one of the oldest sites in the region, Significant finds at this complex include Buddha's relics. Tantric Buddhism was practiced at this site. 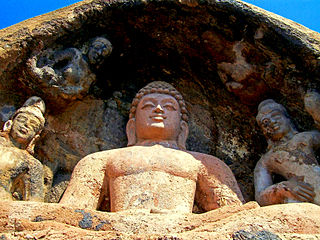 Bojjannakonda and Lingalakonda are two Buddhist rock-cut caves on adjacent hillocks, situated near a village called Sankaram, which is a few kilometres away from Anakapalle, Vishakhapatnam in the Indian state of Andhra Pradesh. The sites are believed to date between 4th and 9th Century A.D, when Buddhism is the majority religion of Sankaram. The original name of Bojjannakonda is Buddina Konda.

Bavikonda Buddhist Complex lies about 16 km from Visakhapatnam, in the Indian state of Andhra Pradesh, on a hill about 130 metres above mean sea level. The term Bavikonda in Telugu means a hill of wells. As per its name, Bavikonda is a hill which has wells for the collection of rainwater. Bavikonda Monastic ruins dates back to the 3rd century BCE. 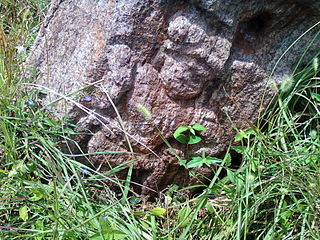 The Amarāvatī Stupa, popularly known as the great stūpa at Amarāvathī, is a ruined Buddhist monument, probably built in phases between the third century BCE and about 250 CE, at Amaravathi village, Guntur district, Andhra Pradesh, India. The site is under the protection of the Archaeological Survey of India. The campus includes the stūpa itself and the Archaeological Museum.