Thottal Thodarum is a 2015 Tamil romantic thriller film written and directed by noted critic and writer Cable Sankar. The film features Thaman Kumar and Arundhati in the lead roles, while Vincent Asokan plays a supporting role. [1] It was released on 23 January 2015 and received mainly negative reviews from the critics. The film was a below average grosser at the box office.

The New Indian Express called it a "promising effort by a debutant and worth a watch". [2] Sify wrote, "Cable Sankar's plot is ambitious and it is unique compared to some of the recent commercial films but falls flat...The problem here is that Cable Sankar has done his paper work with perfection but he missed a lot of things in screen transition". [3] The Times of India gave 2 out of 5 and wrote, "the film fails to make good on its promise, despite the interesting set-up, mainly because of a tired, overlong romantic track with too many songs and dull conversations that just sap the energy out of it. Some of the scenes have a serial-like quality, there is an unsuccessful attempt at humour and the film takes a lot of time to get to the plot". [4] 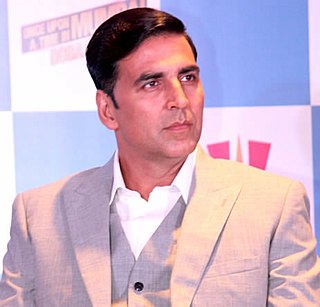 Rajiv Hari Om Bhatia, known professionally as Akshay Kumar, is an Indian-born Canadian actor, producer, martial artist and television personality who works in Bollywood films. In a career spanning over 29 years, Kumar has appeared in over 100 films and has won several awards, including the National Film Award for Best Actor for his performance in Rustom (2016), and two Filmfare Awards for Ajnabee (2001) and Garam Masala (2005).

Sweety Shetty, known by her stage name Anushka Shetty, is an Indian actress and model who predominantly works in the Telugu and Tamil film industries. She has received several accolades, including three CineMAA Awards, a Nandi Award, TN State Film Awards and three Filmfare Awards from eight nominations. Anushka is one of the highest paid actresses of India and is popularly referred as Lady Superstar of south Indian cinema. 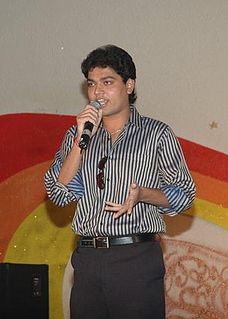 Shakthi Vasudevan is an Indian actor who has predominantly worked on Tamil-language films. The son of director P. Vasu, Shakthi began his career as a child artist in his father's films before making his comeback in the lead role in Thottal Poo Malarum (2007). He has since enjoyed limited success as an actor, notably appearing in Ninaithale Inikkum (2009) and his father's Kannada film, Shivalinga (2016).

Thillalangadi is a 2010 Indian Tamil-language action comedy film directed by M. Raja that stars his brother Jayam Ravi, Tamannaah, and Shaam, who reprises his role from Kick, in lead roles, and an extensive supporting cast including Prabhu, Suhasini, Vadivelu, Santhanam, and Sanchita Shetty, among others playing pivotal roles.

Vincent Asokan is an Indian actor who has predominantly appeared in Tamil language films. He debuted in Aai (2004) and has mostly enacted antagonist roles. He has established a career in Tamil, Malayalam, Kannada and Telugu film industry. Like his father S. A. Ashokan, he is known for negative roles. 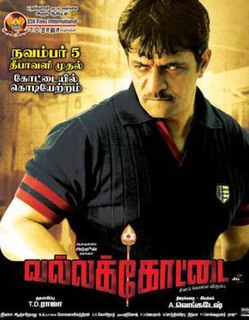 Vallakottai is a 2010 Indian Tamil-language action film directed by A. Venkatesh. A remake of the successful 2007 Malayalam Mammootty-starrer Mayavi, the film features Arjun and Haripriya in the lead roles, while Ashish Vidyarthi, Ganja Karuppu, Sathyan, Suresh, Livingston, Vincent Asokan and Prem play supporting roles. The music was composed by Dhina, and the film released on 5 November 2010. This film opened with decent reviews and became a moderate success among 2010 Deepavali releases and was released along with Uthamaputhiran and Mynaa.

All in All Azhagu Raja is a 2013 Indian Tamil-language romantic comedy film written and directed by M. Rajesh. It featured Karthi, Prabhu, Kajal Aggarwal, Radhika Apte and Santhanam. It marks the second collaboration between Karthi and Kajal Aggarwal who earlier starred in the 2010 action film Naan Mahaan Alla. 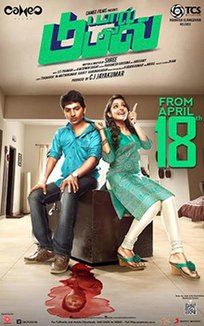 Damaal Dumeel is a 2014 Tamil black comedy-thriller film directed by Sree and produced by C J Jayakumar. The film features Vaibhav and Remya Nambeesan in the leading roles, while Sayaji Shinde and Kota Srinivasa Rao play pivotal roles. The film was released on 18 April 2014 to generally positive reviews. The film was dubbed and released in Telugu as Dhana Dhan in 2016.

Meaghamann is a 2014 Indian Tamil-language action drama film written and directed by Magizh Thirumeni and produced by Hitesh Jabak. The film features Arya and Hansika Motwani in the lead roles, while Ashutosh Rana, Sudhanshu Pandey, Ramana, Ashish Vidyarthi, Mahadevan, and Harish Uthaman play supporting roles. S. Thaman composed the film's music. It was also dubbed in Hindi under the same title and premiered on Zee Cinema. 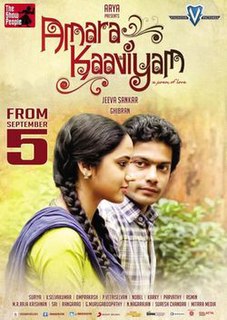 Amara Kaaviyam is a 2014 Tamil romantic drama film written and directed by Jeeva Shankar featuring Sathya and Miya in the lead roles while Sathya's elder brother, actor Arya produced the film. The movie features a successful soundtrack composed by Ghibran. It opened to mixed reviews in September 2014. The movie was remade in Bengali in 2020 as Love Story by Rajiv Kumar Biswas starring Bonny Sengupta.

Arundhati, is an Indian film actress who predominantly appears in South Indian films, primarily Tamil and Kannada movies. Arundhati made her debut through a Tamil movie and this includes Veluthu Kattu (2010) that was produced by S.A. Chandrasekhar who also gave her the screen name Arundhati. After this she played pivotal roles in numerous Tamil films including Bodinayakarun Ganesan (2011), Sundaattam (2013), Agraja (2014), Netru Indru (2014), Naaigal Jaakirathai (2014), Thottal Thodarum (2015), Aarthanaari (2016), Kaala (2018).

Saagasam is a 2016 Indian Tamil-language action comedy film directed by Arun Raj Varma and written and produced by Thiagarajan. The film features Prashanth and Amanda Rosario in the lead roles, while an ensemble cast including Thambi Ramaiah, Sonu Sood, Abeetha and Abi Saravanan portray supporting roles. The film is a remake of the 2012 Telugu film Julai, and was released on 5 February 2016

Baby is a 2015 Indian Hindi-language action thriller film written and directed by Neeraj Pandey. The film stars Akshay Kumar in the lead role, along with Taapsee Pannu, Rana Daggubati, Danny Denzongpa, Anupam Kher, Mikaal Zulfiqar, Kay Kay Menon, Madhurima Tuli and Rasheed Naz in supporting roles. Made on a budget of ₹58.97 crore (US$8.3 million), the film released on 23 January 2015 to generally positive reviews from critics, who particularly praised the direction and Kumar's performance. 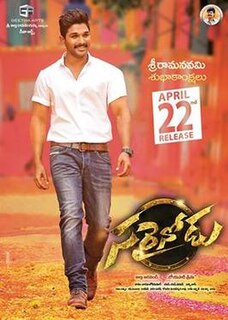 Sarrainodu is a 2016 Indian Telugu-language action comedy film written and directed by Boyapati Srinu. Produced by Allu Aravind under the Geetha Arts banner. The film stars Allu Arjun, Srikanth, Aadhi Pinisetty, Catherine Tresa, Rakul Preet Singh in the lead roles, while Brahmanandam, Pradeep Rawat, Sai Kumar, Suman, Jayaprakash and Adarsh Balakrishna playing supporting roles. S. Thaman composed the film's music and background score. Cinematography is by Rishi Punjabi. The Telugu and Malayalam versions of the film was released on 22 April 2016 and became one of the highest grossing Telugu film of 2016. It received mixed to positive reviews from critics and was a major commercial success at the box office. It was also released in December 2017 in Nepal and earned 1.27 million at the box office.

Nethraa is a 2019 Indian Tamil thriller film co-produced and directed by A. Venkatesh. The film features a cast including Vinay Rai, Thaman Kumar and Subiksha in the lead roles and visualization by cinematographer A. Jeyaprakash. The music was composed by Srikanth Deva, with editing by N. Vinaj. The film, predominantly shot in Canada, began production during August 2016, was released on 9 February 2019. The film received highly negative reviews.

Ivan Thanthiran is a 2017 Indian Tamil-language action thriller film written and directed by R. Kannan. The film features Gautham Karthik and Shraddha Srinath in the lead roles, while RJ Balaji and Super Subbarayan play supporting roles. S. Thaman composed the film's music, while Prasanna Kumar handled the cinematography and Selva RK did the editing. The film released on 30 June 2017. 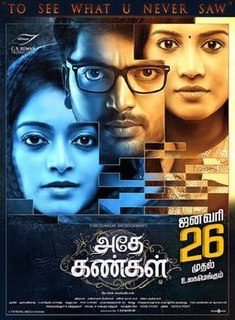 Adhe Kangal is a 2017 Indian Tamil-language romantic action thriller film written and directed by Rohin Venkatesan and produced by C. V. Kumar. The film features Kalaiyarasan, Janani Iyer and Sshivada in the leading roles and Bala Saravanan plays the role of comedian, while Ghibran composes the film's music. The film had a theatrical release on 26 January 2017 coinciding with India's Republic Day to unanonymously positive reviews. The film was declared as a superhit at the box office. The film was remade in Kannada as Samhaara starring Chiranjeevi Sarja in the role of Kalaiyarasan, and also in Telugu as Neevevaro with Aadhi reprising Kalaiyarasan's role

Chal Mohan Ranga is a 2018 Indian Telugu language romantic comedy film directed by Krishna Chaitanya and produced by Sudhakar Reddy along with Pawan Kalyan and Trivikram Srinivas. The film features Nithiin in the lead role, in his 25th film, and Megha Akash in the lead roles, Madhunandan, Rao Ramesh, Naresh and Lissy in other important roles.