The river's name derives from the ancient Gallic word for tranquil. [3]

Course of the river

The Thouet rises in the Gâtine Vendéenne, the most southern outcrop of the Armorican Massif, at 225 metres (738 ft) altitude. The Armorican Massif is made up of volcanic and metamorphic rocks dating back to the Paleozoic era. This impermeable land does not result in any important aquifers but is an area of significant rainfall runoff. From the source to Parthenay the river flows in a generally east–west direction. [4] [5]

To the east of Parthenay, the river turns north and flows on a generally northward heading for the rest of its course. Between Saint-Loup-Lamairé and Thouars, the river flows onto the Paris Basin, an area of sedimentary rocks where successive marine deposits of periods from the Triassic to the Pliocene were laid down. The nature of the rocks here allows the formation of an aquifer whose water reserves support the river in times of low flow. [4] [5]

In order downstream, the Thouet flows through: [3] [4]

The principal tributaries of the River Thouet are:

For much of its length, the Thouet is paralleled by the GR 36 long-distance walking route, which connects Ouistreham, on the coast of the English Channel, with Bourg-Madame, on the border with Spain. This stretch of the path traces the footsteps of pilgrims from Brittany and Normandy on their way to Santiago de Compostela, and in places crosses the river using the same fords, packhorse bridges and stepping stones the pilgrims would have used. [3] [6]

The Thouet was once navigable between its confluence with the Loire and Montreuil-Bellay. The first mention of navigation on the river dates from 1430 when an assembly of merchants in Saumur suggested the creation of a navigation over this stretch of the river, requiring the creation of passages through three mill weirs. It is possible that boats were already carrying goods on the river before that date, the cargo being transferred between boats at each obstacle. [7]

King Charles VII authorised the start of work by letters patent, financing the work by allowing the lords of Montreuil-Bellay to raise a tax on wine that would pass through their land. In the 15th and 16th centuries, the passage through the weirs probably took the form of flash locks. The later pound lock may have been introduced towards the end of the 16th century, and it is known that three pound locks were in use on the river by 1608. A project to make the river navigable up to Thouars was proposed in 1746 but was never executed. [7]

The Dive, a tributary of the Thouet, was canalised in 1834 to create the Canal de la Dive. As part of this development, two modern pound locks with straight sides and mitred gates were built on the Thouet, downstream of the confluence with the Dive. A third modern lock was built at the same time on the Thouet, but upstream from the confluence of the Dive. These locks had dimensions of 32 m (105 ft) length, 5.20 m (17.1 ft) width, and a draught of 1.60 m (5 ft 3 in). [7]

However the new navigation soon faced competition from better roads and the railway, which appeared in the region in 1874. The maximum boat size imposed by the locks proved insufficient, and a proposed enlargement to the larger Freycinet gauge was never realized. The last commercial navigation on the river was in 1920. [7] 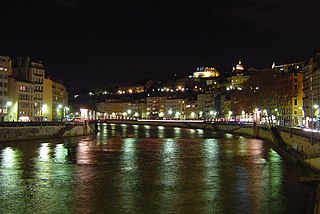 The Saône is a river in eastern France. It is a right tributary of the Rhône, rising at Vioménil in the Vosges department and joining the Rhône in Lyon, at the southern end of the Presqu'île.

The Château de Montreuil-Bellay is a historical building in the town of Montreuil-Bellay, département of Maine-et-Loire, France, first built on the site of a Gallo-Roman village high on a hill on the banks of the Thouet River. It is listed as a monument historique by the French Ministry of Culture. 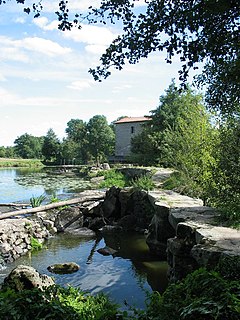 The Sèvre Nantaise is a river in the Pays de la Loire regions in western France. It is a left-bank tributary of the Loire. Its total length is 141.8 km (88.1 mi). Its source is in the Deux-Sèvres department, near Secondigny. It flows from south to north through the departments and towns listed here, reaching the river Loire in the city of Nantes. That city gives it the name Sèvre Nantaise, distinguishing it from the Sèvre Niortaise further south. 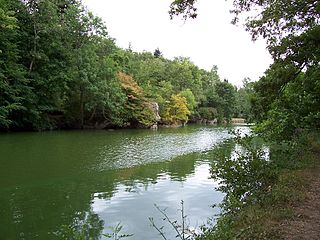 The Mayenne is a 202.3 km (125.7 mi) long river in western France, principally located in the French region of Pays de la Loire. Together with the river Sarthe and its tributary the Loir it forms the Maine, which is a tributary to the Loire. 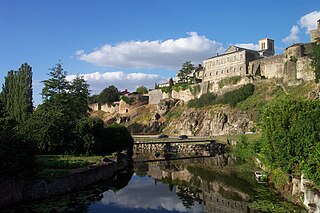 Montreuil-Bellay is a commune in the Maine-et-Loire department in western France. 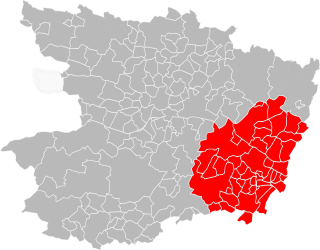 Saint-Loup-Lamairé is a commune in the Deux-Sèvres department in western France.

Secondigny is a commune in the Deux-Sèvres department in western France. 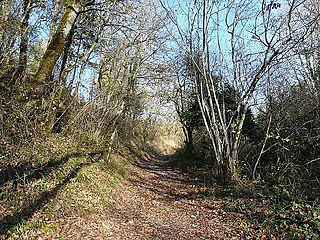 The GR 36 is a long-distance walking route of the Grande Randonnée network in France. The route connects Ouistreham, on the Normandy coast of the English Channel, with Bourg-Madame, on the Pyrenees border with Spain. 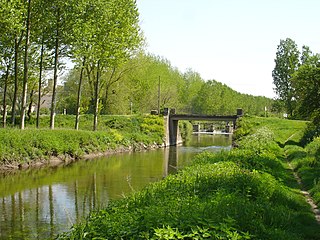 The Dive is a 73.7 km (45.8 mi) river in the Nouvelle-Aquitaine and Pays de la Loire regions in western France. It is a right-bank tributary of the Thouet. Its source is in the commune of Maisonneuve, Vienne. It later bisects the department of Deux-Sèvres to reach Maine-et-Loire. It flows generally northwards and through the towns of Moncontour and Brézé, finally flowing into the Thouet in Saint-Just-sur-Dive.

The Oudon is a 103.2 km (64.1 mi) long river in the Mayenne and Maine-et-Loire départements, western France. Its source is near La Gravelle. It flows generally south east. It is a right tributary of the Mayenne into which it flows between Le Lion-d'Angers and Grez-Neuville. 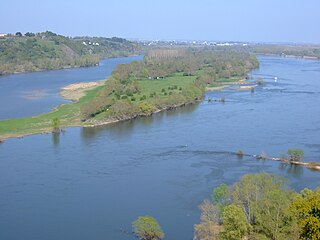 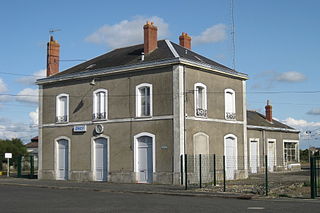 Gare de Montreuil-Bellay is a railway station serving the village of Montreuil-Bellay, Maine-et-Loire, western France. It is situated on the Saumur-Thouars railway, an electrified branch line of approximately 10 miles in length. To the north of the line Saumur station also lies on the Tours–Saint-Nazaire railway. TGV services to Paris are available from Tours. Thouars station to the south is situated on the Loudun-La Roche-Sur-Yon railway.

Wikimedia Commons has media related to River Thouet .
This page is based on this Wikipedia article
Text is available under the CC BY-SA 4.0 license; additional terms may apply.
Images, videos and audio are available under their respective licenses.