Thought and Change is a 1964 book by the philosopher Ernest Gellner, in which the author outlines his views on "modernity" and looks at the processes of social change and historical transformation and, perhaps most forcefully, the power of nationalism. Maleŝević and Haugaard argue that the method is the socio-historical method, and Gellner sets out a powerful sociology of specific philosophical doctrines and ideologies, from utilitarianism and Kantianism to nationalism. The chapter specifically dealing with nationalism was later expanded to form the basis of Gellner's most famous book, Nations and Nationalism (1983).

Ernest André Gellner was a British-Czech philosopher and social anthropologist described by The Daily Telegraph, when he died, as one of the world's most vigorous intellectuals, and by The Independent as a "one-man crusader for critical rationalism".

Modernity, a topic in the humanities and social sciences, is both a historical period, as well as the ensemble of particular socio-cultural norms, attitudes and practices that arose in the wake of the Renaissance—in the "Age of Reason" of 17th-century thought and the 18th-century "Enlightenment". Some commentators consider the era of modernity to have ended by 1930, with World War II in 1945, or the 1980s or 1990s; the following era is called postmodernity. The term "contemporary history" is also used to refer to the post-1945 timeframe, without assigning it to either the modern or postmodern era.

Utilitarianism is an ethical and philosophical theory that states that the best action is the one that maximizes utility, which is usually defined as that which produces the greatest well-being of the greatest number of people, and in some cases, sentient animals. Jeremy Bentham, the founder of utilitarianism, described utility as the sum of all pleasure that results from an action, minus the suffering of anyone involved in the action. Utilitarianism is a version of consequentialism, which states that the consequences of any action are the only standard of right and wrong. Unlike other forms of consequentialism, such as egoism and altruism, utilitarianism considers the interests of all beings equally.

They also note that rather than looking at the internal coherence of philosophies, Gellner places them in their historical context. He thus explains their origins and their likely influence. Modernity is considered to be "unique, unprecedented and exceptional", with characteristics sustained by growth of economies and increases in cultural uniformity. [1]

A nation is a stable community of people, formed on the basis of a common language, territory, history, ethnicity, or psychological make-up manifested in a common culture. A nation is distinct from a people, and is more abstract, and more overtly political, than an ethnic group. It is a cultural-political community that has become conscious of its autonomy, unity, and particular interests.

An ethnic group or an ethnicity is a category of people who identify with each other based on similarities such as common ancestry, language, history, society, culture or nation. Ethnicity is usually an inherited status based on the society in which one lives. Membership of an ethnic group tends to be defined by a shared cultural heritage, ancestry, origin myth, history, homeland, language or dialect, symbolic systems such as religion, mythology and ritual, cuisine, dressing style, art or physical appearance.

An imagined community is a concept developed by Benedict Anderson in his 1983 book Imagined Communities, to analyze nationalism. Anderson depicts a nation as a socially constructed community, imagined by the people who perceive themselves as part of that group.

Historiography is the study of how history is written. One pervasive influence upon the writing of history has been nationalism, a set of beliefs about political legitimacy and cultural identity. Nationalism has provided a significant framework for historical writing in Europe and in those former colonies influenced by Europe since the nineteenth century. According to the medieval historian Patrick J. Geary:

[The] modern [study of] history was born in the nineteenth century, conceived and developed as an instrument of European nationalism. As a tool of nationalist ideology, the history of Europe's nations was a great success, but it has turned our understanding of the past into a toxic waste dump, filled with the poison of ethnic nationalism, and the poison has seeped deep into popular consciousness.

Liah Greenfeld, "the great historian of nationalism", is an Israeli-American Russian-Jewish interdisciplinary scholar engaged in the scientific explanation of human social reality on various levels, beginning with the individual mind and ending with the level of civilization. She has been called “the most iconoclastic” of contemporary sociologists and her approach represents the major alternative to the mainstream approaches in social science. Throughout her analyses, she emphasizes the empirical foundation of claims that she makes about human thought and action, underlining the importance of logical consistency between different sources of evidence as well as between the many interrelated hypotheses that come together to help us explain complex human phenomena. Because our thought and action are rarely limited to one, conveniently isolated sphere of human existence but rather occur within the context of more than one area of our reality at the same time Greenfeld highlights the fact that an empirical study of humanity must necessarily be interdisciplinary.

In social science, disenchantment is the cultural rationalization and devaluation of religion apparent in modern society. The term was borrowed from Friedrich Schiller by Max Weber to describe the character of modernized, bureaucratic, secularized Western society, where scientific understanding is more highly valued than belief, and where processes are oriented toward rational goals, as opposed to traditional society, where for Weber, "the world remains a great enchanted garden".

Anthony David Stephen Smith was a British historical sociologist who, at the time of his death, was Professor Emeritus of Nationalism and Ethnicity at the London School of Economics. He is considered one of the founders of the interdisciplinary field of nationalism studies.

Alan Donald James Macfarlane FBA FRHistS is an anthropologist and historian and a Professor Emeritus of King's College, Cambridge. He is the author or editor of 20 books and numerous articles on the anthropology and history of England, Nepal, Japan and China. He has focused on comparative study of the origins and nature of the modern world. In recent years he has become increasingly interested in the use of visual material in teaching and research. He is a Fellow of the British Academy and the Royal Historical Society. 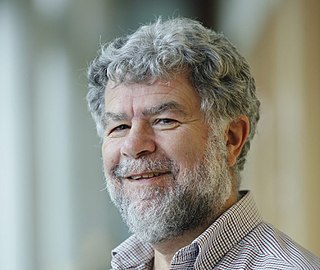 Prasenjit Duara, originally from Assam, India, a historian of China, is Professor, Department of History, Duke University, after being the Raffles Professor of Humanities at the National University of Singapore where he was also Director of Asian Research Institute and Research in Humanities and Social Sciences. Duara also taught at George Mason University and the Department of History in the University of Chicago, where he was also chairman of the department from 2004-2007.

Siniša Malešević, MRIA, MAE is Full Professor/Chair of Sociology at the University College, Dublin, Ireland. His research interests include the comparative-historical and theoretical study of ethnicity, nationalism, ideology, war, violence and sociological theory. He is author of seven and editor or co-editor of another seven books including influential monographs Ideology, Legitimacy and the New State (2002), The Sociology of Ethnicity (2004), Identity as Ideology (2006) The Sociology of War and Violence (2010), Nation-States and Nationalisms (2013) and The Rise of Organised Brutality (2017).The Rise of Organised Brutality is a recipient of the outstanding book award from the American Sociological Association's Peace, War and Social Conflict Section [1]. Professor Malesevic has also authored over 90 peer-reviewed journal articles and book chapters and has given more than 120 invited talks all over the world [2]. His work has been translated into several languages including Chinese, Croatian, Persian, Spanish, Portuguese, Polish, Thai, Turkish, Indonesian, Russian and Serbian. Previously he held research and teaching appointments at the Institute for International Relations (Zagreb), the Centre for the Study of Nationalism, CEU (Prague)- where he worked with late Ernest Gellner -, and at the National University of Ireland, Galway. He also held visiting professorships and fellowships at Université Libre de Bruxelles, the Institute for Human Sciences, Vienna and the London School of Economics. In March 2010 he was elected a Member of the Royal Irish Academy[3]], in December 2012 he was elected associated member of Academy of Sciences and Arts of Bosnia and Herzegovina[4]] and in August 2014 he was elected a Member of Academia Europaea [5]].

John A. Hall is the James McGill Professor of Comparative Historical Sociology at McGill University, Montreal. He is the author or editor of over 20 books.

A national consciousness is a shared sense of national identity; that is, a shared understanding that a people group shares a common ethnic/linguistic/cultural background. Historically, a rise in national consciousness has been the first step towards the creation of a nation. National consciousness, at a glance, is one's level of awareness, of the collective, and one's understanding that without "them" there is no "us". It is the mere awareness of the many shared attitudes and beliefs towards things like family, customs, societal and gender roles, etc. This awareness allows one to have a "collective identity" which allows them to be knowledgeable of not only where they are, but how those places and people around them are so significant in that they ultimately make the collective, a nation. In short, national consciousness can be defined as a specific core of attitudes that provide habitual modes for regarding life's phenomena.

Gellner's theory of nationalism was developed by Ernest Gellner over a number of publications from around the early 1960s to his 1995 death. Gellner discussed nationalism in a number of works, starting with Thought and Change (1964), and he most notably developed it in Nations and Nationalism (1983).

Nations and Nationalism is a 1983 book by the philosopher Ernest Gellner, in which the author expands on his theory of nationalism.