Thoughts for the Times on War and Death

Thoughts for the Time of War and Death (German : Zeitgemäßes über Krieg und Tod) is a set of twin essays written by Sigmund Freud in 1915, six months after the outbreak of World War I. The essays express discontent and disillusionment with human nature and human society in the aftermath of the hostilities; and generated much interest among lay readers of Freud. [1]

The first essay addressed the widespread disillusionment brought on by the collapse of the Pax Britannica of the preceding century [2] — what Freud called "the common civilization of peacetime". [3]

The second essay addressed what Freud called the peacetime 'protection racket' whereby the inevitability of death was expunged from civilized mentality. [4] Building on the second essay of Totem and Taboo , [5] Freud argued that such an attitude left civilians in particular unprepared for the stark horror of industrial-scale death in the Great War. [6]

Freud's account of the centrality of loss in culture has been seen as seminal for his later work, Civilization and its Discontents . [7]

Emma Eckstein (1865–1924) was an Austrian author. She was "one of Sigmund Freud's most important patients and, for a short period of time around 1897, became a psychoanalyst herself". She has been described as "the first woman analyst", who became "both colleague and patient" for Freud. As analyst, while "working mainly in the area of sexual and social hygiene, she also explored how 'daydreams, those "parasitic plants", invaded the life of young girls'."

Civilization and Its Discontents is a book by Sigmund Freud, the founder of psychoanalysis. It was written in 1929 and first published in German in 1930 as Das Unbehagen in der Kultur. Exploring what Freud sees as the important clash between the desire for individuality and the expectations of society, the book is considered one of Freud's most important and widely read works, and one of the most influential and studied books in the field of modern psychology.

Three Essays on the Theory of Sexuality, sometimes titled Three Contributions to the Theory of Sex, is a 1905 work by Sigmund Freud, the founder of psychoanalysis, in which the author advances his theory of sexuality, in particular its relation to childhood. 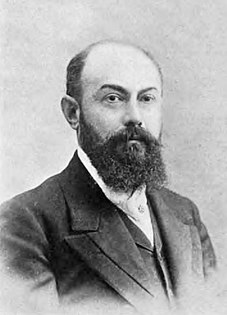 Pierre Marie Félix Janet was a pioneering French psychologist, physician, philosopher, and psychotherapist in the field of dissociation and traumatic memory. 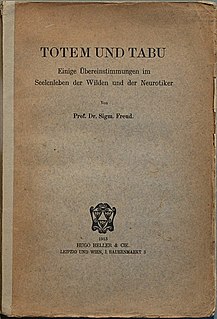 Totem and Taboo: Resemblances Between the Mental Lives of Savages and Neurotics, or Totem and Taboo: Some Points of Agreement between the Mental Lives of Savages and Neurotics, is a 1913 book by Sigmund Freud, the founder of psychoanalysis, in which the author applies his work to the fields of archaeology, anthropology, and the study of religion. It is a collection of four essays inspired by the work of Wilhelm Wundt and Carl Jung and first published in the journal Imago (1912–13): "The Horror of Incest", "Taboo and Emotional Ambivalence", "Animism, Magic and the Omnipotence of Thoughts", and "The Return of Totemism in Childhood".

In classical Freudian psychoanalytic theory, the death drive is the drive toward death and destruction, often expressed through behaviors such as aggression, repetition compulsion, and self-destructiveness. It was originally proposed by Sabina Spielrein in her paper "Destruction as the Cause of Coming Into Being" in 1912, which was then taken up by Sigmund Freud in 1920 in Beyond the Pleasure Principle. This concept has been translated as "opposition between the ego or death instincts and the sexual or life instincts". In Pleasure Principle, Freud used the plural "death drives" (Todestriebe) much more frequently than in the singular. 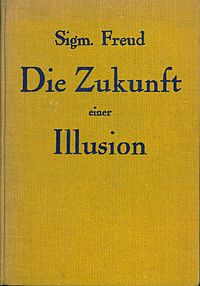 The Future of an Illusion is a 1927 work by Sigmund Freud, the founder of psychoanalysis, in which Freud discusses religion's origins, development, and its future. He provides a psychoanalysis of religion, which he views as a false belief system.

Beyond the Pleasure Principle is a 1920 essay by Sigmund Freud that marks a major turning point in his theoretical approach. Previously, Freud attributed most human behavior to the sexual instinct. With this essay, Freud went "beyond" the simple pleasure principle, developing his drive theory with the addition of the death drive(s), Todestrieb[e].

In Freudian psychoanalysis, the ego ideal is the inner image of oneself as one wants to become. Alternatively, "the Freudian notion of a perfect or ideal self housed in the superego," consisting of "the individual's conscious and unconscious images of what he would like to be, patterned after certain people whom ... he regards as ideal."

The narcissism of small differences is the thesis that communities with adjoining territories and close relationships are especially likely to engage in feuds and mutual ridicule because of hypersensitivity to details of differentiation. The term was coined by Sigmund Freud in 1917, based on the earlier work of British anthropologist Ernest Crawley. In language differing only slightly from current psychoanalytic terminology, Crawley declared that each individual is separated from others by a taboo of personal isolation, a narcissism of minor differences.

Psychoanalytic sociology is the research field that analyzes society using the same methods that psychoanalysis applied to analyze an individual.

Sigmund Freud's views on religion are described in several of his books and essays. Freud regarded God as an illusion, based on the infantile need for a powerful father figure; religion, necessary to help us restrain violent impulses earlier in the development of civilization, can now be set aside in favor of reason and science. 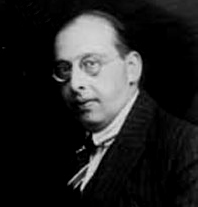 Hanns Sachs was one of the earliest psychoanalysts, and a close personal friend of Sigmund Freud. He became a member of Freud's Secret Committee of six in 1912, Freud describing him as one "in whom my confidence is unlimited in spite of the shortness of our acquaintance".

Sigmund Freud is considered to be the founder of the psychodynamic approach to psychology, which looks to unconscious drives to explain human behavior. Freud believed that the mind is responsible for both conscious and unconscious decisions that it makes on the basis of psychological drives. The id, ego, and super-ego are three aspects of the mind Freud believed to comprise a person's personality. Freud believed people are "simply actors in the drama of [their] own minds, pushed by desire, pulled by coincidence. Underneath the surface, our personalities represent the power struggle going on deep within us".

Creative Writers and Day-Dreaming, was an informal talk given in 1907 by Sigmund Freud, and subsequently published in 1908, on the relationship between unconscious phantasy and creative art.

Homo duplex is a view promulgated by Émile Durkheim, a macro-sociologist of the 19th century, saying that a man on the one hand is a biological organism, driven by instincts, with desire and appetite and on the other hand is being led by morality and other elements generated by society. What allows a person to go beyond the "animal" nature is the most common religion that imposes specific normative system and is a way to regulate behaviour.