Thoughts on Machiavelli is a book by Leo Strauss first published in 1958. The book is a collection of lectures he gave at the University of Chicago in which he dissects the work of Niccolò Machiavelli. The book contains commentary on Machiavelli's The Prince and the Discourses on Livy . [1]

Leo Strauss argued that the most visible fact about Machiavelli's doctrine is also the most useful one: Machiavelli seems to be a teacher of wickedness. Strauss sought to incorporate this idea in his interpretation without permitting it to overwhelm or exhaust his exegesis of The Prince and the Discourses on the First Ten Books of Livy.

"We are in sympathy," he writes, "with the simple opinion about Machiavelli [namely, the wickedness of his teaching], not only because it is wholesome, but above all because a failure to take that opinion seriously prevents one from doing justice to what is truly admirable in Machiavelli: the intrepidity of his thought, the grandeur of his vision, and the graceful subtlety of his speech." [2] [3]

Niccolò di Bernardo dei Machiavelli was an Italian diplomat, politician, historian, philosopher, writer, playwright and poet of the Renaissance period. He has often been called the father of modern political philosophy and political science. For many years he served as a senior official in the Florentine Republic with responsibilities in diplomatic and military affairs. He wrote comedies, carnival songs, and poetry. His personal correspondence is of high importance to historians and scholars. He worked as secretary to the Second Chancery of the Republic of Florence from 1498 to 1512, when the Medici were out of power. He wrote his best-known work The Prince in 1513, having been exiled from city affairs. 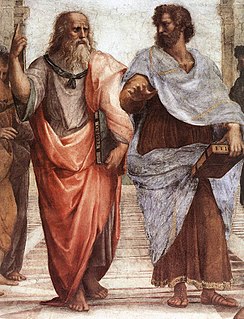 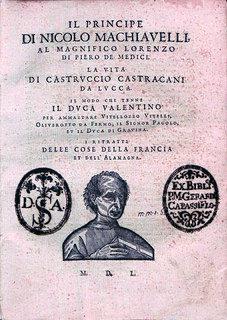 The Prince is a 16th-century political treatise by the Italian diplomat and political theorist Niccolò Machiavelli. From his correspondence, a version appears to have been distributed in 1513, using a Latin title, De Principatibus. However, the printed version was not published until 1532, five years after Machiavelli's death. This was carried out with the permission of the Medici pope Clement VII, but "long before then, in fact since the first appearance of The Prince in manuscript, controversy had swirled about his writings".

Modernity, a topic in the humanities and social sciences, is both a historical period, as well as the ensemble of particular socio-cultural norms, attitudes and practices that arose in the wake of the Renaissance—in the "Age of Reason" of 17th-century thought and the 18th-century "Enlightenment". Some commentators consider the era of modernity to have ended by 1930, with World War II in 1945, or the 1980s or 1990s; the following era is called postmodernity. The term "contemporary history" is also used to refer to the post-1945 timeframe, without assigning it to either the modern or postmodern era.

A tyrant, in the modern English-language usage of the word, is an absolute ruler unrestrained by law, or one who has usurped legitimate sovereignty. Often portrayed as cruel, tyrants may defend their position by oppressive means. The original Greek term meant an absolute sovereign who came to power without constitutional right, yet the word had a neutral connotation during the Archaic and early Classical periods. However, Greek philosopher Plato saw tyrannos as a negative word, and on account of the decisive influence of philosophy on politics, its negative connotations only increased, continuing into the Hellenistic period.

Leo Strauss was a German-American political philosopher and classicist who specialized in classical political philosophy. Born in Germany to Jewish parents, Strauss later emigrated from Germany to the United States. He spent much of his career as a professor of political science at the University of Chicago, where he taught several generations of students and published fifteen books. 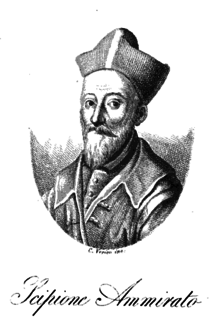 Scipione Ammirato was an Italian historian and philosopher.

Persecution and the Art of Writing, published in 1952 by the Free Press, is a book of collected articles written by Leo Strauss. The book contains five previously published essays, many of which were significantly altered by Strauss from their original publication. The general theme of the book is the relationship between politics and philosophy. The thesis of the book is that many ancient and early modern political philosophers, in order to avoid persecution, hid their most heterodox ideas within their texts. 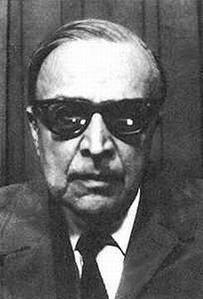 Alexandre Kojève was a Russian-born French philosopher and statesman whose philosophical seminars had an immense influence on 20th-century French philosophy, particularly via his integration of Hegelian concepts into twentieth-century continental philosophy. As a statesman in the French government, he was instrumental in the formation of the European Union. Kojève was a close friend of, and was in lifelong philosophical dialogue with, Leo Strauss. 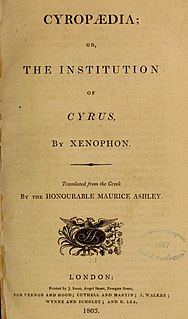 The Cyropaedia, sometimes spelled Cyropedia, is a partly fictional biography of Cyrus the Great the founder of Achaemenid Empire, the first Persian Empire. It was written around 370 BC by Xenophon, the Athenian gentleman-soldier, and student of Socrates. The Latinized title Cyropaedia derives from Greek Kúrou paideía, meaning "The Education of Cyrus". Aspects of it would become a model for medieval writers of the genre known as mirrors for princes. In turn it was a strong influence upon the most well-known but atypical of these, Machiavelli's The Prince, which was an important influence in the rejection of medieval political thinking, and the development of modern politics. However, unlike most "mirrors of princes", whether or not the Cyropaedia was really intended to describe an ideal ruler is a subject of debate.

Philip Chase Bobbitt is an American author, academic, and lawyer. He is best known for work on military strategy and constitutional law and theory, and as the author of several books: Constitutional Fate: Theory of the Constitution (1982), The Shield of Achilles: War, Peace and the Course of History (2002), and Terror and Consent: the Wars for the Twenty-first Century (2008). He is currently the Herbert Wechsler Professor of Jurisprudence at Columbia University School of Law and a Distinguished Senior Lecturer at The University of Texas School of Law.

The Discourses on Livy is a work of political history and philosophy written in the early 16th century by the Italian writer and political theorist Niccolò Machiavelli, best known as the author of The Prince. The Discourses were published posthumously with papal privilege in 1531. 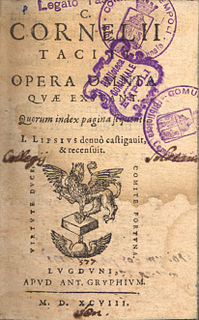 Tacitean studies, centred on the work of Tacitus the Ancient Roman historian, constitute an area of scholarship extending beyond the field of history. The work has traditionally been read for its moral instruction, its narrative, and its inimitable prose style; Tacitus has been most influential as a political theorist, outside the field of history. The political lessons taken from his work fall roughly into two camps : the "red Tacitists", who used him to support republican ideals, and the "black Tacitists", those who read his accounts as a lesson in Machiavellian realpolitik.

The Art of War is a treatise by the Italian Renaissance political philosopher and historian Niccolò Machiavelli.

Machiavellianism as a trope, or "popular discourse", in political history is a pejorative term for the supposed political philosophy of the Italian Renaissance diplomat Niccolò Machiavelli, "a negative caricature of Machiavellian ideology as godless, scheming and self-interested". Though in discussions of Machiavelli's thought "Machiavellian" and "Machiavellianism" may be used in reasoned critiques, in general usage the terms more often occur in political polemic, suggesting an unprincipled lust for power, achieved through "subtle policie, cunning roguerie", by the "Machiavel", an adherant of these principles. In this trope, as described by Isaiah Berlin, Machiavelli was regarded as "a man inspired by the Devil to lead good men to their doom, the great subverter, the teacher of evil, le docteur de la scélératesse, the inspirer of St. Bartholomew’s Eve, the original of Iago". 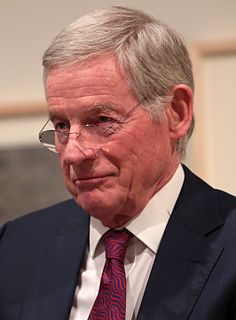 Niccolò Machiavelli started work with the Chancery in Florence at the age of 29, traveling on diplomatic missions around Europe. In the 14 years he served the Chancery, he met great statesmen and politicians, including Louis XII, Emperor Maximilian and Cesare Borgia, and gained great insight into the political workings of Europe. He gave Florentine generals successful military advice concerning tactics and organizing infantry forces. He even established a Florentine militia. When the Medici came back into power in 1512, Machiavelli was arrested, tortured and exiled from Florence. 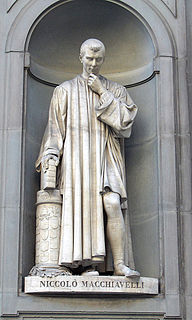