Thouqan Hindawi - A Jordanian politician,educator,and parliamentary who was born in 1927 in The Hindawi Madafa or Court of his father Sheikh Salem Pasha Hindawi in the Northern Region of The Hashemite Kingdom of Jordan which was Emirate of Transjordan at that time. During his life,Hindawi served for over 40 years in several key government positions from 1965 until 2005. Some of these positions include Chief of The Royal Hashemite Court,Deputy Prime Minister,Minister of Education,Minister of Finance,Minister of Media,Minister of Social Affairs,Minister of Labor,Minister of State for Prime Ministry Affairs,Senator in Upper House of Parliament,Deputy in Lower House of Parliament,and Ambassador. Hindawi died in 2 July 2005 and was buried in The Royal Hashemite Court Cemetery near King Hussein of Jordan tomb [1]

Hindawi started his early schooling years in the Northern Region of Jordan,until at a later stage he was selected to join the Arab College in Jerusalem in 1943 as well as the University of London in 1945 which made him earn his Palestinian Secondary School Certificate by 1946. After that he earned his Bachelor's Degree in History from Cairo University which was King Farouk I University at that time in 1950 and few years later he earned his Master's degree in Advanced Education from the University of Maryland in 1956. [2]

After earning his Bachelor's Degree,Hindawi started his career in the Public Sector in 1950 as a History Teacher in the Ministry of Education in Jordan. Soon after that he was promoted to become an Education Inspector and shortly after that the Director of the Teacher's Training Academy of Beit Hanina in the West Bank of Jordan. He moved in 1962 to become the Director of Social Affairs at the UNRWA United Nations Relief and Works Agency. He remained there couple of years until he was appointed as Educational Attachéin the Jordanian Embassy in Cairo in 1964 and then back to Jordan as the General Secretary of the Ministry of Media at that same year. [2]

Hindawi certainly held the critical Position of Minister of Education more times and longer than any other in Jordan. It is a documented fact that he is genuinely considered by both educators and historians to be the master engineer and visionary driver of the educational transformational revolution of modern Jordan as well as a major contributor to the education development of the entire region. [3]

Hindawi was trusted by the late King Hussein of Jordan and was chosen to hold the important position of Chief of The Royal Hashemite Court in 1989. He was also appointed 2 times as an Ambassador for Jordan abroad and 4 times as a Senator in the Upper House of Parliament. He was elected by Jordanians in General Elections as a Deputy for the Eleventh Lower House of Parliament for a 4 year term. [4]

Most of his life,Hindawi was on the Board of Trustees of a number of public and private academic institutions including the University of Jordan and the Yarmouk University as well as the Chairman of the Board of Trustees of the Applied Science University and the Arab Community College. He received several prestigious State Medals and International Awards from a variety of countries and organizations. He wrote and published the Palestinian Case book which was consistently taught as a pillar of the Jordanian Secondary Curriculum from 1967 until 1994. It was announced that he also wrote his own autobiography which focused on his early days but it was not published until date. [2]

Hindawi remained publicly active in government positions until he suddenly died from a severe heart attack on 2 July 2005 and was buried in The Royal Cemetery inside The Royal Hashemite Court near the late King Hussein of Jordan tomb. [2]

The politics of Jordan takes place in a framework of a parliamentary monarchy,whereby the Prime Minister of Jordan is head of government,and of a multi-party system. Jordan is a constitutional monarchy based on the constitution promulgated on January 8,1952. The king exercises his power through the government he appoints which is responsible before the Parliament. 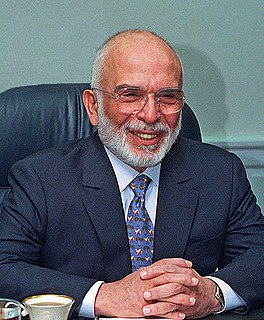 Hussein bin Talal was King of Jordan from 11 August 1952 until his death in 1999. As a member of the Hashemite dynasty,the royal family of Jordan since 1921,Hussein was a 40th-generation direct descendant of Muhammad. 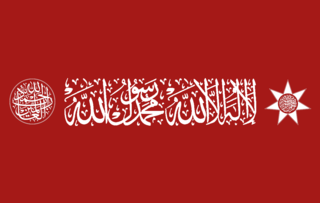 The Hashemites,also House of Hashim,are the royal family of Jordan,which they have ruled since 1921,and were the royal family of the kingdoms of Hejaz (1916–1925),Syria (1920) and Iraq (1921–1958). The family had ruled the city of Mecca continuously from the 10th century,frequently as vassals of outside powers,and were given the thrones of the Hejaz,Syria,Iraq and Jordan following their World War I alliance with the British Empire;this arrangement became known as the "Sharifian solution". 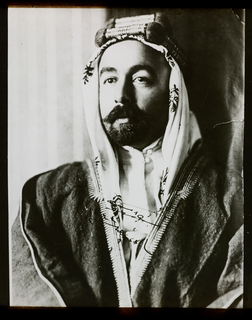 Abdullah I bin Al-Hussein was the founder and ruler of the Jordanian realm from 11 April 1921 until his assassination on the 20th of July 1951. He was the Emir of Transjordan,a British protectorate,until 25 May 1946,after which he was the king of an independent Jordan. As a member of the Hashemite dynasty,the royal family of Transjordan/Jordan since 1921,Abdullah was a 38th-generation direct descendant of Muhammad.

Faisal al-Fayez is a Jordanian politician who was the Prime Minister of Jordan from 25 October 2004 to 6 March 2005. He took office following the resignation of Ali Abu al-Ragheb. He resigned after being criticized for not being reformist enough. He previously served as Defence Minister and is close to the king. He was educated at the College De La Salle,Amman,Jordan (1970) and then went on to Cardiff University,United Kingdom,where he received a degree in political science in 1978. In 1981,he has a master's degree in international relations from Boston University. 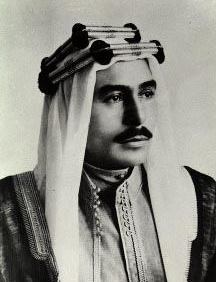 Talal bin Abdullah was the King of Jordan from the assassination of his father,King Abdullah I,on 20 July 1951 until his forced abdication on 11 August 1952. As a member of the Hashemite dynasty,the royal family of Jordan since 1921,Talal was a 39th-generation direct descendant of Muhammad.

Ahmad Toukan was a Jordanian political leader of Palestinian descent who was the Prime Minister of Jordan from 26 September 1970 to 28 October 1970. 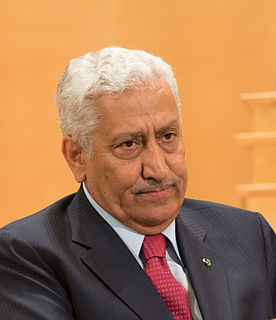 Abdullah Ensour is a Jordanian economist who was Prime Minister of Jordan between October 2012 and May 2016. A veteran politician,he has held various cabinet positions in Jordanian government in addition to being prime minister.

The Parliament of Jordan is the bicameral Jordanian national assembly. Established by the 1952 Constitution,the legislature consists of two houses:the Senate and the House of Representatives.

HE Major General Qassem Pasha Al-Nasser (1925–2007) was a Jordanian officer who participated in the 1948 Arab-Israeli War. He was part of many battles,such as:Latrun,Bab El-wad,and Misherem,amongst others. 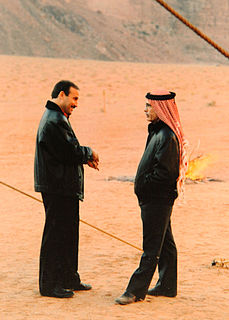 Ayman Hazza' al-Majali is the former Deputy Prime Minister of the Hashemite Kingdom of Jordan. He is the son of Jordan's late Premier Hazza' al-Majali. As a Member of Jordan's House of Representatives he also headed the parliament's Lower House Finance Committee.

Abdullah Rimawi was the head of the Ba'ath Party in Jordan in the 1950s. He served as Foreign Affairs Minister in Suleiman Nabulsi's government in 1957. A staunch pan-Arabist,Rimawi became one of the most vocal opponents of the Hashemite ruling family in Jordan and favored union with Syria. He fled Jordan in 1957 as the result of a crisis between the leftist government and the royal family. He based himself in the United Arab Republic where he drew closer to UAR President Gamal Abdel Nasser provoking his expulsion from the Ba'ath Party—which was at odds with Nasser—in 1959. Soon after he founded a splinter party called the Arab Socialist Revolutionary Ba'ath Party. During his exile,he allegedly made a number of attempts to attack or undermine the Jordanian monarchy. 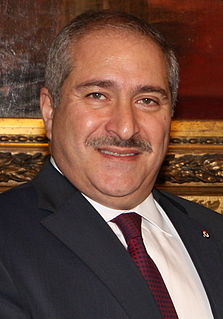 Nasser Sami Judeh is a Jordanian politician who served as Jordan's longest serving minister of foreign affairs,having served between 2009 and 2017 in eight consecutive governments. He also served as deputy prime minister from 2015 to 2017. He serves as a senator in the Jordanian Upper House of Parliament.

Awad Mohamad Khleifat is a Jordanian politician who served as the Hashemite Kingdom of Jordan's deputy prime minister and interior minister from October 2012 to late March 2013.

Jawad Anani is a Jordanian economist and politician. After working for the Central Bank of Jordan in the 1960s and 1970s he held high ranking positions in the civil service. He has held several ministerial posts since 1979,including a four-year stint as Minister of Labour between 1980 and 1984. During the early 1990s he held positions as Minister of State for Cabinet Affairs and Minister of Information,and was involved in the peace-process between Jordan and Israel. During the later half of the decade he was Deputy Prime Minister for Development Affairs,Foreign Minister and Chief of the Royal Court. From June 2016 until January 2017 he was Deputy Prime Minister for Economic Affairs in the cabinets of Hani Al-Mulki.

Ayman Safadi is a Jordanian politician who serves as Deputy Prime Minister and Minister of Foreign Affairs. 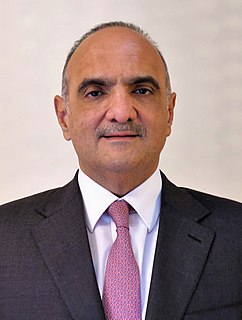 Bisher Al Khasawneh is a Jordanian politician and diplomat who has served as Prime Minister of Jordan and Minister of Defense since 12 October 2020.

Khaled Abdelaziz Sulaiman al-Karaki is a Jordanian author,poet,academic and politician. He served as the Jordanian Minister of Culture (1989–91) and Deputy Prime Minister. He is a past president of Jerash University (2002–2006) and the University of Jordan (2007–2010). He currently chairs the Jordan Academy of Arabic.