Thousand Island Park Historic District is a national historic district located on the south tip of Wellesley Island at Orleans in Jefferson County, New York, United States. The district includes 294 contributing buildings. It is an outstanding concentration of substantially intact late 19th century and early 20th century resort architecture. [2] It was listed on the National Register of Historic Places in 1982. [1]

Thousand Island Park is located on the southwest tip of Wellesley Island in the heart of the Thousand Islands on the Saint Lawrence River. In 1875, Thousand Island Park was founded by Rev. J.F. Dayan, [3] as a Methodist summer, Chautauqua-like community. The main purpose was to enable families to secure pleasant lots for cottages or tents where they could spend a portion of the summer in a beautiful, cool, and salubrious place with religious purposes being secondary. The Park's landmarks, homes, and way of life were nearly destroyed by fire. It is fortunate so much remains. [4] [5]

The Methodist summer camp colony that surrounded the Tabernacle was soon transformed from a tent city into a permanent village of summer residences. It was built on a scale far surpassing other similar associations. All roads lead to the Tabernacle centered prominently and squarely at the head of the Park on St. Lawrence Ave. The Tabernacle was the center for socialization and participation in Chautauqua-like programs which included religious studies, Sunday school institutes, outdoor recreation, travel lectures, temperance rallies and discussion of social reforms.

Campers leased lots, set up their tents on the preferred, prime lots closest to the Tabernacle. This grouping of tents was often called a tent city. The first diminutive cottages were tents constructed of wood on the original wooden tent platform. Individual owners also improvised, conceived and produced hybrids, combining styles and embellishing these small Tent Platform/Campground style structures, called the Landmark Shop, with fanciful gingerbread. As the architecture on the Park evolved, larger structures came into vogue. Much of the look of these Victorian cottages derives its characteristics from the varied styles of nineteenth-century architecture. In addition to the charming Gothic Tent style cottages, Gothic Revival, Eastlake, Stick, Shingle, and Queen Anne became popular architectural styles. After the fire of 1912, Bungalow/Craftsman styles, Neoclassical Revival style, and vernacular cottages were added to the Park's varied styles of architecture.

The destruction by fire in 1912 of the Park's last great hotel, The Columbian and 99 cottages plus the business district, signaled the end of the Golden Era. After the fire and through the Depression, barely half of the cottages were occupied and eventually, another 200 cottages were torn down. [7] [8]

In 1975, the Centennial Celebration served as a catalyst for change in the Park; the architectural charm and setting was once again appreciated. The Centennial Year Celebration inspired the formation of the Landmark Society in 1976, and the path that led to the Park regaining its architectural character and integrity. A small group of dedicated Landmark Society members initiated the nomination of Thousand Island Park to the National Register of Historic Places, finally achieved in 1982. The Thousand Island Park Landmark Society is supported today by individuals who promote the mission set forth by the Landmark founders. [9]

Bay View is an unincorporated resort community and census designated place (CDP) in the U.S. state of Michigan. It is located in Bear Creek Township, Emmet County on Little Traverse Bay and abuts the east side of the city of Petoskey along U.S. Highway 31. The ZIP code is 49770 and the FIPS place code is 06260. It was originally formed as part of the Methodist Camp Meeting movement and in 1886 the Chautauqua movement added. As of the 2010 census the population of the CDP was 133. Bay View is incorporated as a domestic nonprofit organization under Act 39 of the Public Acts of 1899, being MCL 455.51. Act 39 of the Public Acts of 1899 establishes Bay View as a body politic and corporate. 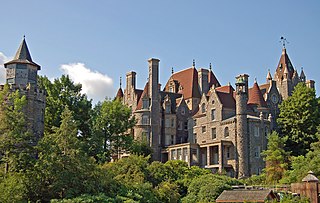 Boldt Castle is a major landmark and tourist attraction in the Thousand Islands region of the U.S. state of New York. Open to guests seasonally between mid May and mid October, it is located on Heart Island in the Saint Lawrence River. Heart Island is part of the Town of Alexandria, in Jefferson County. Originally a private mansion built by American millionaire George Boldt, it is today maintained by the Thousand Islands Bridge Authority as a tourist attraction. 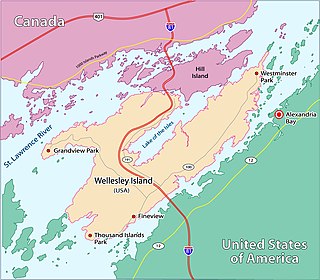 Chautauqua is a private semi-gated summer resort that started as a 19th-century tent settlement. The name Piasa is taken from a nearby Native American painting of a mythical bird, called the Piasa Bird, which was painted on the bluffs high above the Mississippi River. Chautauqua is located between Elsah and Grafton in Jersey County. Today, it is bordered by and has access from the Great River Road. It has functioned as a private non-denominational Christian summer resort for over a century.

The Colorado Chautauqua, located in Boulder, Colorado, United States, and started in 1898, is the only Chautauqua west of the Mississippi River still continuing in unbroken operation since the heyday of the Chautauqua Movement in the 1920s. It is one of the few such continuously operating Chautauquas remaining in the United States, and was designated a National Historic Landmark in 2006. According to its governing body, the Colorado Chautauqua Association, it is also unique in that it is the only year-round Chautauqua.

The Isaac Bell House is a historic house and National Historic Landmark at 70 Perry Street in Newport, Rhode Island. Also known as Edna Villa, it is one of the outstanding examples of Shingle Style architecture in the United States. It was designed by McKim, Mead, and White, and built during the Gilded Age, when Newport was the summer resort of choice for America's wealthiest families. 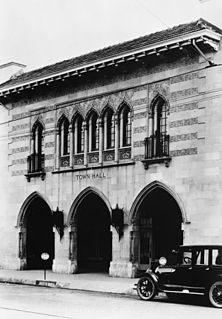 Jules Jacques Benois Benedict was one of the most prominent architects in Colorado history, whose works include a number of well-known landmarks and buildings listed on the National Register of Historic Places. 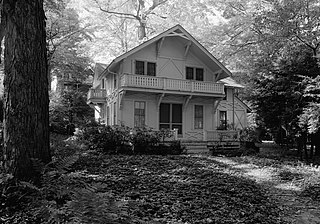 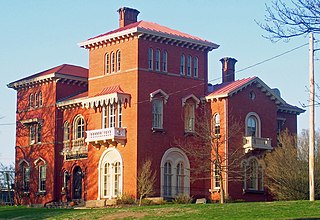 The Edward King House, is a monumentally scaled residence at 35 King street in Newport, Rhode Island. It was designed for Edward King in the "Italian Villa" style by Richard Upjohn and was built between 1845 and 1847, making it one of the earliest representations of the style. It was the largest and grandest house in Newport when it was built. Edward King was the largest landowner in town by 1860, having made his fortune through the China Trade. 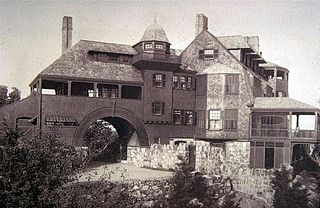 Wesleyan Grove is a 34-acre (14 ha) National Historic Landmark District in Oak Bluffs, Massachusetts on the island of Martha's Vineyard. Also known as the Martha's Vineyard Campmeeting Association (MVCMA) or the Campgrounds, it was the first summer religious camp established in the United States. It is famous for its many Carpenter Gothic cottages with Victorian-style, gingerbread trim.

The Monteagle Sunday School Assembly (MSSA) is an interdenominational religious organization based in Monteagle, Tennessee. It was chartered by the state of Tennessee on October 31, 1882, with the purpose of

the advancement of science, literary attainment, Sunday School interests, and the promotion of the broadest popular culture in the interest of Christianity without regard to sect or denomination.

Glyndon Historic District is a national historic district in Glyndon, Baltimore County, Maryland, United States. It is a turn-of-the-20th-century community northeast of Reisterstown, Maryland, that began as a summer resort. The district is residential except for a small business district located at the intersection of Butler Road and the Western Maryland Railway tracks. The Emory Grove Campground on the northern boundary is occupied in the summer. A decided architectural homogeneity exists in Glyndon representing vernacular examples of late 19th century styles. They are typically frame, ​2 1⁄2-story-high cottages, with one or occasionally 2-story front porches. 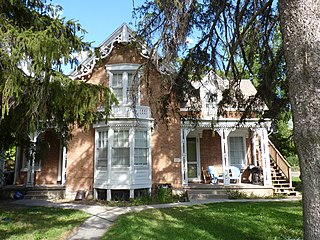 The Harvey H. Cluff house is a house in central Provo, Utah, United States, built in 1877 that is on the National Register of Historic Places. It was originally owned by Harvey H. Cluff. 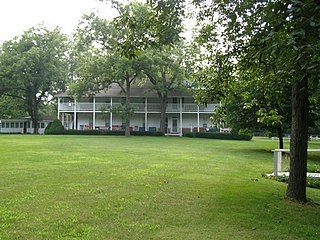 Since 1895, Fountain Park has hosted an annual Chatauqua to promote traditional values and religious, social and educational activities. It was added to the National Register of Historic Places on December 7, 2001.

The Chester Heights Camp Meeting Historic District is a historic Methodist camp meeting and national historic district located in Chester Heights, Delaware County, Pennsylvania. The district includes 101 contributing buildings, which were designed in the vernacular camp meeting style of architecture; additional notable examples of the Gothic Revival and Queen Anne styles also are present here. Public buildings include the contributing Tabernacle (1878), Dining Hall (1900), Youth Tabernacle (1909, and dormitory. Most of the contributing buildings are cottages, which were built roughly between 1876 and 1920.

Thousand Island Park is a hamlet and census-designated place (CDP) in the town of Orleans, Jefferson County, New York, United States, in the Thousand Islands region on the St. Lawrence River. The community includes the Thousand Island Park Historic District, listed on the National Register of Historic Places in 1982. As of the 2010 census, the population was 31 permanent residents, although there were 323 housing units, indicating a much greater seasonal population. 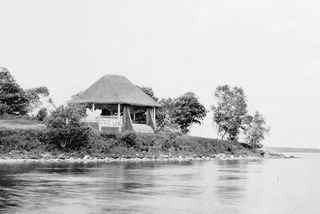 The St. Lawrence Reservation was a former protected area established by the state of New York in the Thousand Islands region along the St. Lawrence River in the late 19th century. The reservation's parks were some of the earliest lands purchased by New York State for the purposes of recreation and land preservation.