The Thousand Islands Railway (originally Gananoque & Rideau Railway) was an 8 km (5.0 mi) long railway running from the town of Gananoque north to the Grand Trunk Railway (now CN) Toronto-Montreal mainline, just south of present-day Cheeseborough. The service ran for 111 years between 1884 and 1995. The rails were removed in October 1997.

The railway was originally incorporated as Gananoque & Rideau Railway on 15 February 1871, but construction did not begin until 1883 due to lack of money. The town provided tax breaks and $10,000 in debenture financing to Rathbun's Bay of Quinte Railway and Navigation Company to build the line; that company already operated steamship docks in the village. [1] The original 5-kilometre (3.1 mi) line opened 1 January 1884. The company name was changed to Thousand Islands Railway four months later. A swing bridge over the mouth of the Gananoque River was constructed in 1894 to provide service to businesses on the east side of the river.

The line originally served to carry timber and freight to Gananoque's docks, where it could be loaded onto ships. While available timber stocks soon diminished, passenger traffic increased as the Grand Trunk under Charles Melville Hays promoted the tiny town as a vacation destination. [2]

The original junction between the Thousand Island Railway and the Grand Trunk Railway was moved 2.5 kilometres (1.6 mi) east in 1902 to a flatter location. A 1947 map of the Gananoque terminal shows a nine-switch track arrangement, a coal/wood yard, a coal dealer, a number company, a mill, the Cow and Gate dairy, a two-stall engine house, passenger station and freight/express building. [3]

The unique locomotive #500 is preserved at Sculpture Park, where King Street crosses the Gananoque River. The waterfront station became a restaurant after passenger service ended, but was destroyed by fire in 1990; the Arthur Child Heritage Museum was built on the site. The former right-of-way is readily visible on satellite imagery, and is now a hiking trail. The Gananoque Junction station remains on Station Road which is 1.2 kilometres (0.75 mi) west of Hiscocks Road.

Gananoque is a town in the Leeds and Grenville area of Ontario, Canada. The town had a population of 5,383 year-round residents in the 2021 Canadian Census, as well as summer residents sometimes referred to as "Islanders" because of the Thousand Islands in the Saint Lawrence River, Gananoque's most important tourist attraction. The Gananoque River flows through the town and the St. Lawrence River serves as the southern boundary of the town.

The Bytown and Prescott Railway (B&PR) was a railway joining Ottawa with Prescott on the Saint Lawrence River. The company was incorporated in 1850, and the first train ran from Prescott into Bytown on Christmas Day, 1854. The 84 km railway, Ottawa's first to outside markets, was initially used to ship lumber collected on the Ottawa River for further shipping along the St. Lawrence to markets in the United States and Montreal. 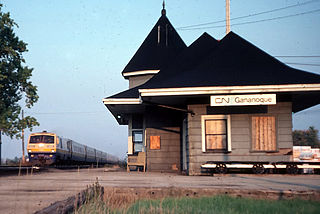 Gananoque railway station in Gananoque, Ontario, Canada is served by Via Rail trains running from Toronto to Ottawa and Montreal. The station is an unstaffed but heated shelter.

The Kingston railway station is an inter-city passenger rail station in Cataraqui, Kingston, Ontario, Canada. It is served by Via Rail trains running from Toronto to Ottawa or Montreal, along the Corridor route. It is located on John Counter Boulevard, northeast of Princess Street and north-west of downtown Kingston. 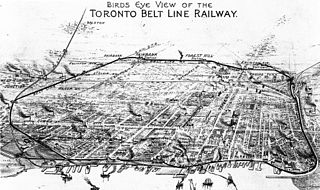 The Toronto Belt Line Railway was built during the 1890s in Toronto, Ontario, Canada. It consisted of two commuter railway lines to promote and service new suburban neighbourhoods outside of the then city limits. Both lines were laid as loops. The longer Don Loop ran north of the city limits, while the shorter Humber Loop ran west of the city limits. The railway was never profitable and it only ran for two years. Today, as part of a rails-to-trails project, the Beltline Trail lies on the right-of-way of the Don Loop.

The Canada Atlantic Railway Company (CAR) was a historic North American railway located in Ontario, southwestern Quebec and northern Vermont. It connected Georgian Bay on Lake Huron with the northern end of Lake Champlain via Ottawa. It was formed in 1897 through a merger of three separate railway companies that John Rudolphus Booth had either purchased or created, beginning in 1879. The CAR was owned by Booth for eight years after its formation until he sold it to the Grand Trunk Railway (GTR) in 1904.

The Guelph Junction Railway is a shortline railway owned by the City of Guelph, Ontario, and serves the city's northwest industrial park.

The Toronto and Nipissing Railway (T&N) was the first public narrow-gauge railway in North America. It chartered in 1868 to build from Toronto to Lake Nipissing in Ontario, Canada, via York, Ontario, and Victoria counties. At Nipissing it would meet the transcontinental lines of the Canadian Pacific, providing a valuable link to Toronto. It opened in 1871, with service between Scarborough and Uxbridge. By December 1872 it was extended to Coboconk, but financial difficulties led to plans of the line being built further abandoned at this point. The railway merged with the Midland Railway of Canada in 1882.

The Columbia and Western Railway (C&W) was a historic, and initially narrow gauge, railway in southern British Columbia.

South River Railway Station is located in the community of South River in Ontario. The station was originally constructed by the Northern and Pacific Junction Railway, a subsidiary of the Northern and Northwestern Railway, in 1884. It was subsequently owned and operated by the Grand Trunk Railway and Canadian National Railways. It was a significant station stop along the historic route connecting Toronto to North Bay, and the Canadian Pacific Railway (1885). Transcontinental trains traveling between Toronto and Vancouver once frequented the station. It is likely the oldest wooden railway station in north-eastern Ontario. It is now a community heritage building in the town of South River.

The Port Whitby and Port Perry Railway (PW&PP) was a railway running from Whitby to Port Perry, running north–south about 50 km east of Toronto. It was built to connect local grain and logging interests with the railway mainlines on the shores of Lake Ontario. It was later extended northeast to Lindsay, becoming the Whitby, Port Perry and Lindsay Railway (WPP&L).

The Massawippi Valley Railway was a short line railway established 1870 between Lennoxville, Quebec, and the Vermont border. Part of the Quebec Central Railway from 1926, the line was abandoned in 1990 and removed in 1992. Most of the former railway's path is now bicycle trails. 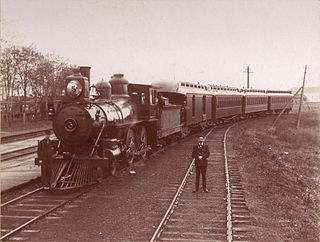 The Bay of Quinte Railway was a short-line railway in eastern Ontario, Canada. It was formed as the Napanee, Tamworth and Quebec Railway (NT&QR), chartered in 1878 by Edward Rathbun and Alexander Campbell, with plans to run from Napanee through Renfrew County and on to the Ottawa Valley. Lacking funding from the governments, development never began.

The Memory Junction Railway Museum preserved a collection of railway memorabilia in southeastern Ontario. It closed in 2017 and its collections were auctioned in 2021. It was located in the former Grand Trunk Railway station of Brighton, Ontario, which opened in 1857 and served intercity rail passengers until the 1960s.

The Lake Simcoe Junction Railway (LSJR) was a short-line narrow gauge railway in Ontario just north of Toronto. It branched off the Toronto and Nipissing Railway at Stouffville and ran 42 kilometres (26 mi) north to the town of Sutton and then beyond to the shore of Lake Simcoe where a large wharf was built. The presence of the railway helped the town of Jackson's Point form on the lakeside. The line serviced timber and agricultural shipping, but was more widely used for shipping ice cut from the lake in the winter, and allowing weekend day trips to the lake in the summer.

The Cataraqui Trail is a 104-km Rails-to-Trails multi-use linear recreational trail in Eastern Ontario, Canada. The route passes by farmland, woods, lakes, and wetlands. The trail begins southwest of Smiths Falls, at a parking lot south of Ontario Highway 15 designated as kilometre zero.

The Waterloo Junction Railway (WJR) is a short line railway in the Region of Waterloo, Ontario, Canada. It runs northward from the former Grand Trunk Railway (GTR) North Main Line in downtown Kitchener, through Waterloo and St. Jacobs before terminating in Elmira. It is currently owned by the City of Waterloo and operated by CN as the Waterloo Spur. The Waterloo Central Railway runs tourist trains on the line, and the Ion rapid transit runs on the route for a short distance.