Thousand Lights is a multi-domed mosque in Anna Salai in Chennai, Tamil Nadu, India, is one of the largest mosques in the country and is a revered place of worship and azadari for Shia Muslims in the city. [2]

The chief Shia Qazi of Chennai functions from the mosque, and the post has been continuously held by the same family. [3] : 128

Madurai is one of the longest living cities in the world and a major city in the Indian state of Tamil Nadu. It is the cultural capital of Tamil Nadu and the administrative headquarters of Madurai District. As of the 2011 census, it was the third largest Urban agglomeration in Tamil Nadu after Chennai and Coimbatore and the 44th most populated city in India. Located on the banks of River Vaigai, Madurai has been a major settlement for two millennia and has a documented history of more than 2500 years. It is often referred to as "Thoonga Nagaram", meaning "the city that never sleeps".

Arcot is a town and urban area of Ranipet district in the state of Tamil Nadu, India. Located on the southern banks of Palar River, the city straddles a trade route between Chennai and Bangalore or Salem, between the Mysore Ghat and the Javadi Hills. As of 2018, the city had a population 129,640. The sweet makkan peda is a local speciality while Arcot biryani, a rice-based traditional food, is also served here. Arcot Mudaliars and Muslims are the dominant communities followed by Naidus and Vanniyars in Arcot town.

Fort St. George is the first English fortress in India, founded in 1639 at the coastal city of Madras, the modern city of Chennai. The construction of the fort provided the impetus for further settlements and trading activity, in what was originally an uninhabited land. Thus, it is a feasible contention to say that the city evolved around the fortress. The fort currently houses the Tamil Nadu legislative assembly and other official buildings.

Vandavasi or Wandiwash is a Town and municipality in the Tiruvannamalai district of the Indian state of Tamil Nadu. As of 2011, the town had a population of 74,320.

Palar is a river of southern India. It rises in the Nandi Hills in Chikkaballapura district of Karnataka state, and flows 93 kilometres (58 mi) in Karnataka, 33 kilometres (21 mi) in Andhra Pradesh and 222 kilometres (138 mi) in Tamil Nadu before reaching its confluence into the Bay of Bengal at Vayalur about 100 kilometres (62 mi) south of Chennai. It flows as an underground river for a long distance only to emerge near Bethamangala town, from where, gathering water and speed, it flows eastward down the Deccan Plateau. The Towns of Bethamangala, Santhipuram, Kuppam, Ramanaickenpet, Vaniyambadi, Ambur, Melpatti, Gudiyatham, Pallikonda, Anpoondi, Melmonavoor, Vellore, Katpadi, Melvisharam, Arcot, Ranipet, Walajapet, Kanchipuram, Walajabad, Chengalpattu, Kalpakkam, and Lattur are located on the banks of the Palar River. Of the seven tributaries, the chief tributary is the Cheyyar River.

Royapuram is a locality in the northern part of the city of Chennai, Tamil Nadu, India. It is best known for its beach, and for Royapuram Railway Station. The station is the first railway station of south India, opening in 1856, and is today the oldest surviving railway station of the Indian subcontinent

Triplicane, known in the vernacular as Thiruvallikeni, is one of the oldest neighbourhoods of Chennai, India. It is situated on the Bay of Bengal coast and about 0.6 km (0.37 mi) from Fort St George. The average elevation of the neighbourhood is 14 metres above sea level.

Alandur is a zone of Chennai corporation, and an urban node in Chennai district in Guindy division in the state of Tamil Nadu, India. It is Surrounded by Guindy in the North and East, Adambakkam in the South, Pazhavanthangal in the South-West and St Thomas Mount in the North-West. As of 2011, Alandur had a population of 164,430. The town agglomeration of Alandur will have an estimated population of 300,000 by 2030. Alandur neighbours the St. Thomas Mount Cantontment, the Officers Training Academy of the Indian army and the nearby towns of Guindy and Adambakkam. M. G. Ramachandran, a former chief minister of Tamil Nadu started his political career by winning his first legislative election from Alandur in 1967. Alandur also holds famous landmarks of Chennai namely Nehru Statue and Kathipara Junction. 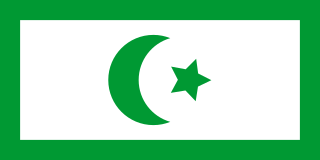 The CarnaticSultanate was a kingdom in South India between about 1690 and 1855, and was under the legal purview of the Nizam of Hyderabad, until their demise. They initially had their capital at Arcot in the present-day Indian state of Tamil Nadu. Their rule is an important period in the history of the Carnatic and Coromandel Coast regions, in which the Mughal Empire gave way to the rising influence of the Maratha Empire, and later the emergence of the British Raj.

Vellore Fort is a large 16th-century fort situated in heart of the Vellore city, in the state of Tamil Nadu, India built by Vijayanagara kings. The fort was at one time the headquarters of the Aravidu Dynasty of the Vijayanagara Empire. The fort is known for its grand ramparts, wide moat and robust masonry. 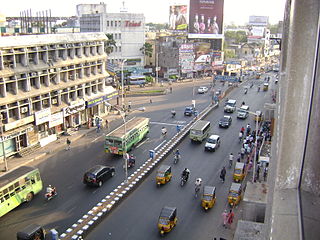 Anna Salai, formerly known as St. Thomas Mount Road or simply Mount Road, is an arterial road in Chennai, India. It starts at the Cooum Creek, south of Fort St George, leading in a south-westerly direction towards St. Thomas Mount, and ends at the Kathipara Junction in Guindy. Beyond the Kathipara Junction, a branch road arises traversing westwards to Poonamallee to form the Mount-Poonamallee Road while the main branch continuing southwards to Chennai Airport, Tambaram and beyond to form Grand Southern Trunk Road. Anna Salai, which is more than 400 years old, is acknowledged as the most important road in Chennai city. The head offices of many commercial enterprises and public buildings are located along Anna Salai. It is the second longest road in Chennai, after EVR Periyar Salai.

Arcot Road(SH-113) is one of the main arterial roads of the city of Chennai in Tamil Nadu, India. It runs for 12 kilometres and connects Nungambakkam with Porur. The road was constructed during the early 1940s and has been responsible for the development of the outlying areas on the western fringes of Chennai city.

Christianity in the state of Tamil Nadu, India is the second largest religion in the state. According to tradition, St. Thomas, one of the twelve apostles, landed in Malabar Coast in AD 52. In the colonial age many Portuguese, Dutch, British and Italian Christians came to Tamil Nadu. Priests accompanied them not only to minister the colonisers but also to spread the Christian faith among the non-Christians in Tamil Nadu. Currently, Christians are a minority community comprising 6% of the total population. Christians are mainly concentrated in the southern districts of Tamil Nadu - Kanyakumari, Thoothukudi and Tirunelveli. 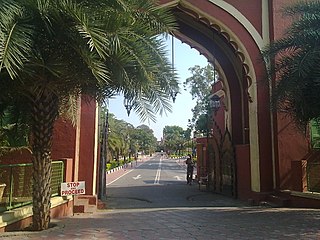 Amir Mahal is the official residence of the titular Nawab of Arcot and his family. Situated in Royapettah, a neighbourhood of Chennai, India, it was constructed in Indo-Saracenic style in 1798, the Amir Mahal has been the residence of the family since 1876. The Prince of Arcot, Nawab Mohammed Abdul Ali, lives in the palace with his family. 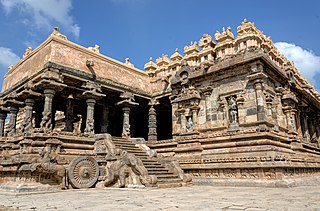 Nearly 33,000 ancient temples, many at least 800 to 2000 years old, are found scattered all over Tamil Nadu. As per Tamil Nadu Hindu Endowments Board, there are 38,615 temples. Most of the largest Hindu Temples reside here. Studded with complex architecture, variety of sculptures, and rich inscriptions, the temples remain the very essence of the culture and heritage of Tamil land, with historical records dating back to at least 3,000 years.

Triplicane Big Mosque is a mosque located in Triplicane High Road, Triplicane in Chennai, the capital of the South Indian state of Tamil Nadu. Constructed in the Mughal architectural style, the mosque was built in 1795 by the family of Muhammad Ali Khan Wallajah, the Nawab of Arcot during 1765. It has a large prayer hall, a tank and a large ground in front. The entire structure is constructed with granite without the use of iron or wood.

Anna Nagar twin arches are ornamental twin arches located in Anna Nagar, Chennai, India. It was built on January 1, 1986 to commemorate the platinum jubilee of the former Chief Minister of Tamil Nadu C. N. Annadurai. Located at the junction of Poonamallee High Road and Anna Nagar Third Avenue, the arches are one of the most prominent landmarks in the city and serve as the entrance of the suburb of Anna Nagar from the southern side. 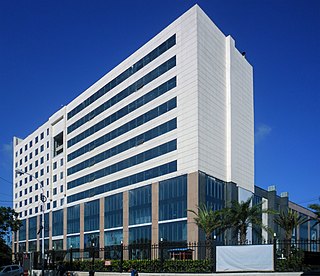 Royapettah is a neighbourhood of Chennai, India.