The Thousandth Anniversary of Islam Mosque or The Anniversary Mosque (Russian: Мечеть 1000-летия принятия Ислама, Мечеть Юбилейная – Mechet’ 1000-letiya prinyatiya Islama, Mechet’ Yubileynaya) was built in Kazan, Tatarstan, Russia to commemorate the thousandth anniversary of the conversion of the Volga Bulgars in to Islam in 922. The alternative name of the mosque, and the most commonly used name, is The Mosque Across the Kaban (Russian: Закабанная мечеть, Zakabannaya mechet’; Tatar : Cyrillic Кабан арты мәчете, Latin Qaban artı mäçete, Arabic قابان ارتئ مەچئتئ), because most of Kazan's mosques are situated on the other side of the Kaban, where the Tatar community was traditionally located before the October Revolution. The part where the mosque was situated was inhabited predominantly by the Russian community.

Based on a design by Pechnikov from 1914, the mosque was built from 1924 to 1926 with private donations by Muslims. It was the only mosque built in the region during the Soviet period. It was closed in the 1930s as part of the Soviet Unions persecution of Muslims and was only reopened and used by Muslims in 1991.

The Tatars is an umbrella term for different Turkic ethnic groups bearing the name "Tatar".

The Republic of Tatarstan, or simply Tatarstan, is a federal subject of the Russian Federation, located in the Volga Federal District. Its capital is the city of Kazan.

Kazan is the capital and largest city of the Republic of Tatarstan, Russia. With a population of 1,243,500, it is the sixth most populous city in Russia. 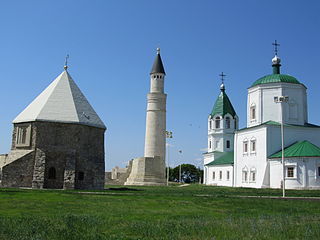 Bolghar was intermittently capital of Volga Bulgaria from the 8th to the 15th centuries, along with Bilyar and Nur-Suvar. It was situated on the bank of the Volga River, about 30 km downstream from its confluence with the Kama River and some 130 km from modern Kazan in what is now Spassky District. West of it lies a small modern town, since 1991 known as Bolgar. The UNESCO World Heritage Committee inscribed Bolgar Historical and Archaeological Complex to the World Heritage List in 2014. 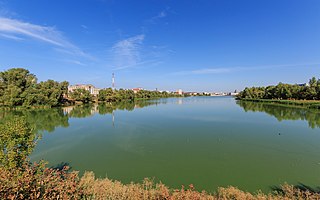 The Kaban Lakes are a system of lakes in Kazan, Republic of Tatarstan, Russia that includes Nizhny (Blizhny) Kaban, Verkhny Kaban, and Sredny Kaban. With a combined area of 1.86 square kilometers (0.72 sq mi), they comprise the biggest lake in Tatarstan.

Islam in Russia is the nation's second most widely professed religion. According to US Department of State in 2017, Muslims in Russia numbered 14,220,000 or 10% of the total population. According to a comprehensive survey in conducted in 2012, Muslims were 6.5% of the Russia's population. However, the populations of two federal subjects with Islamic majorities were not surveyed due to social unrest, which together had a population of nearly 2 million, namely Chechnya and Ingushetia, thus the total number of Muslims may be slightly larger. Among these Muslims, 6,700,000 or 4.6% of the total population of Russia were not affiliated with any Islamic schools and branches.

The Kul Sharif Mosque located in Kazan Kremlin, was reputed to be – at the time of its construction – one of the largest mosques in Russia, and in Europe outside of Istanbul.

The region of Tatarstan, now within the Russian Federation, was inhabited by different groups during prehistory. The state of Volga Bulgaria grew up during the Middle Ages and for a time was subject to the Khazars. The Volga Bulgars became Muslim and incorporated various Turkic peoples to form the modern Volga Tatar ethnic group. 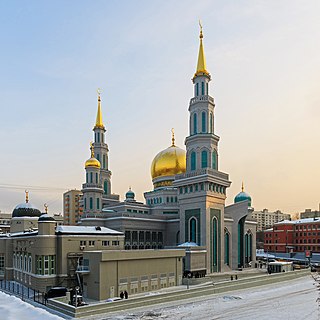 Moscow Cathedral Mosque is the main mosque of Moscow, Russia. It is located on Olimpiysky Avenue, close to the Olympic Stadium in the centre of the city. 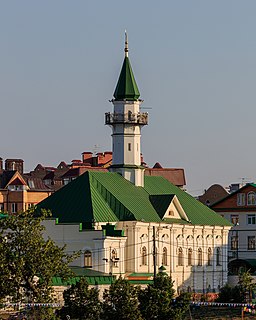 The Märcani Mosque, also spelled al-Marjani, Mardjani and Mardzhani is a mosque in Kazan, Russia, built in 1766-1770 by Catherine the Great's authority and on the city's population's donations.

Äcem Mosque ; is a prominent cathedral mosque in Kazan, Tatarstan, Russia. It is located in the southern part of the Old Tatar Quarter, a historic district populated by Tatars, and is one of about a dozen historical mosques in the district. 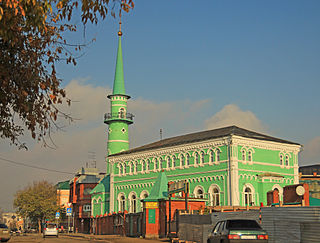 The Soltan Mosque is a mosque in Kazan, Russia.

The Nurulla Mosque is a mosque in Kazan, Russia. 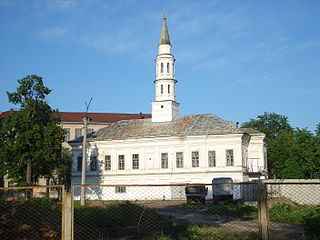 A Tatar mosque is a mosque with a minaret on the roof, a type of mosque that is ubiquitous among Muslim Tatars and Bashkirs in Tatarstan and other Volga Tatar-populated areas. Occasionally found in other regions of Russia, modern Tatar religious architecture was developed in the late 18th century and gained popularity in the 19th century Idel-Ural.

Established in 922, the first Muslim state within the current Russian borders was Volga Bulgaria from whom the Tatars inherited Islam. Islam in Russia has had a long presence, extending at least as far back as the conquest of the Khanate of Kazan in 1552, which brought the Tatars and Bashkirs on the Middle Volga into Russia. Today, Islam is a major faith in Tatarstan, adhered to by nearly 39% of the estimated 3.8 million population. 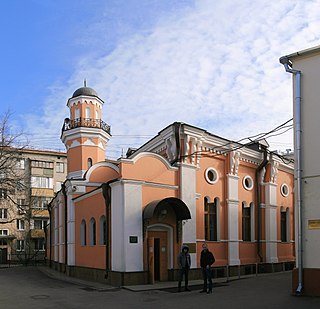 The Old Mosque of Moscow was built in 1823 to replace an earlier private mosque that had been destroyed by the 1812 fire. Its location is Bolshaya Tatarskaya Street in Zamoskvorechye, a neighbourhood formerly settled by the Tatars.

Bulgar Mosque, is a mosque in Kazan, Tatarstan, Russia.