"Thráin" is also a transliteration of the Icelandic name "Þráinn" (also rendered as "Thrainn" in some cases). This may refer to:

The draugr or draug is an undead creature from Norse mythology, also called aptrganga or aptrgangr, literally "again-walker". 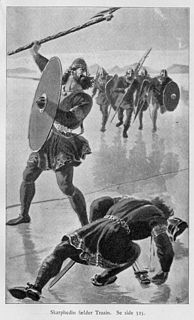 Njáls saga is a thirteenth-century Icelandic saga that describes events between 960 and 1020.

Tappi Tíkarrass was an Icelandic punk band which added elements of funk, rock and jazz to their music, marking a difference from other traditional bands at that time. The band is also considered the first serious music project of now renowned singer Björk Guðmundsdóttir. The band was reformed in 2015 by the original members, without Björk.

Hrómundar saga Gripssonar or The Saga of Hromund Gripsson is a legendary saga from Iceland. The original version has been lost, but its content has been preserved in the rímur of Hrómundr Gripsson, known as Griplur, which were probably composed in the first half of the 14th century, but appeared in print in 1896 in Fernir forníslenzkar rímnaflokkar, edited by Finnur Jónsson. These rímur were the basis for the not very appreciated Hrómunds saga which is found in the 17th-century MS of the Arnamagnæan Manuscript Collection, AM 587b 4°, as well as thirty-eight known later manuscripts. The saga as we now have it contains a number of narrative discrepancies, which are probably the result of the scribe working from a partly illegible manuscript of the rímur.

Nýtt Líf is an Icelandic film directed by Þráinn Bertelsson and released in 1983. The film is a comedy shot in the Westman Islands and stars Eggert Þorleifsson and Karl Ágúst Úlfsson, among others. The music features several musicians including the band Tappi Tíkarrass, which contributed the songs "Sperglar" and "Kukl".

Þráinn Bertelsson is an Icelandic film director, writer, politician, journalist and newspaper editor. He moved into politics in the wake of the financial crisis in 2008, and was elected a member of the Althing in 2009, initially for the Citizens' Movement. He later left the party to become an independent MP, before joining the Left-Green Movement, which he currently represents. 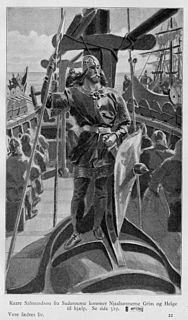 Kári Sölmundarson was a Hebridean viking and soldier of fortune who lived in the late tenth and early eleventh centuries. He is a major character in Njál's Saga. Kári was the son of Solmund, who was the son of Thorbjorn "Jarl's Champion," an Icelander exiled before the establishment of the Althing for murder.

Sigurðsson is a surname of Icelandic origin, meaning son of Sigurður. In Icelandic names, the name is not strictly a surname, but a patronymic.

Magnus is a given name and surname.

The Citizens' Movement was a political party in Iceland, founded in the lead up to the 2009 election during the Global Recession, which severely affected Iceland.

The Movement was a political movement in Iceland. It had three members of parliament in the Icelandic Parliament, the Althing. All of them were former Citizens' Movement (CM) MPs.

Sigla himinfley is an Icelandic drama miniseries created by Þráinn Bertelsson. The series takes place in Vestmannaeyjar, Iceland, and follows the lives of an influential family in the fishing industry.

Skálmöld is a Viking / folk metal band from Reykjavík, Iceland, formed in August 2009. The band's name is literally translated as Age of Swords and also means "lawlessness", referring to the Age of the Sturlungs of Icelandic history, when a civil war broke out between the country's family clans.

Dauðans óvissi tími is a 2004 novel by Þráinn Bertelsson, first published in Reykjavík by JPV Útgáfa. The title alludes to the seventeenth-century poem 'Um dauðans óvissa tíma' by Hallgrímur Pétursson. It is a darkly comical crime novel, but also to a significant extent a Roman à clef about the business activities of Björgólfur Guðmundsson during the 1990s and early 2000s, addressing a range of political, economic, and cultural questions of Iceland of its time. it is the first in a series of books, the second being Valkyrjur.