Thrace ( /θreɪs/ ; Modern Greek : Θράκη, Thráki;) in Greek mythology, was the eponymous heroine and sorceress of Thrace. She was the daughter of Oceanus and Parthenope, and sister of Europa. 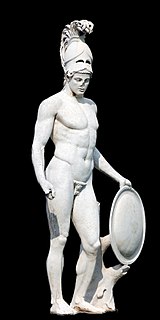 In Greek mythology, King Haemus of Thrace, was the son of Boreas. He was vain and haughty and compared himself and his wife, Queen Rhodope, to Zeus and Hera. The gods changed him and his wife into mountains. In ancient Greek, the Balkan Peninsula was thus known as the "Peninsula of Haemus", a name which retains some currency in modern Greek.

The Mares of Diomedes, also called the Mares of Thrace, were a herd of man-eating horses in Greek mythology. Magnificent, wild, and uncontrollable, they belonged to Diomedes, king of Thrace, son of Ares and Cyrene who lived on the shores of the Black Sea. Bucephalus, Alexander the Great's horse, was said to be descended from these mares.

In Greek mythology, Lycurgus (/laɪˈkɜːrɡəs/; Ancient Greek: Λυκοῦργος Lykoûrgos, Ancient Greek: [lykôrɡos]; was the king of the Edoni in Thrace, son of Dryas, the "oak", and father of a son whose name was also Dryas. 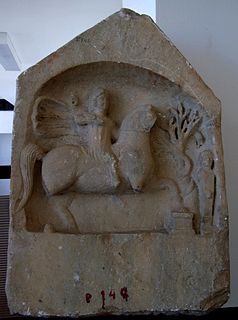 Thracian religion includes the religious practices of the Thracians. Little is known about their mythology and rituals, but some of their gods are depicted in statuary or described in Greek sources.

Merope was originally the name of several, probably unrelated, characters in Greek mythology. The name may refer to:

Bion of Abdera was a Greek mathematician of Abdera, Thrace, and a pupil of Democritus. He wrote both in the Ionic and Attic dialects, and was the first who said that there were some parts of the Earth in which it was night for six months, while the remaining six months were one uninterrupted day.

Rhoemetalces I was king of the Odrysian kingdom of Thrace from 12 BC to 12 AD, in succession to his nephew Rhescuporis I.

Bistonis is the name of a nymph in Greek mythology who gave birth to a son of Ares, Tereus. Although she is mentioned in several surviving classical texts, she is the main subject of few or none. In at least one poem, written by Moschus in the 3rd century BCE, Lake Bistonis, in Thrace, is referred to as being her lake, and that lake is described as having a population of nymphs:

In Greek mythology, Edonus was the ancestor of the Edonians in Thrace and Thracian Macedonia. He was the son of Ares and Calliope. The names Edonus, Edonian, Edonic is therefore used also in the sense of "Thracian", and as Thrace was one of the principal seats of the worship of Dionysus, it further signifies "Dionysiac" or "Bacchantic".

Madytus or Madytos was a Greek city and port of ancient Thrace, located in the region of the Thracian Chersonesos, nearly opposite to Abydos.

In Greek mythology, Chione or Khione, was the daughter of Boreas, the god of the north wind, and Orithyia a daughter of Erechtheus, king of Athens. Chione was the sister of Cleopatra and the Argonauts, Calaïs and Zetes. According to a late, though generally accepted tradition, Chione was the mother of Poseidon's son Eumolpus whom she threw into the ocean for fear of her father's reaction; however, Eumolpus is rescued and raised by Poseidon.