The Thracians (Bulgarian : Траки, Ancient Greek : Θρᾷκες, Latin : Thraci) were a group of Indo-European tribes inhabiting a large area in Central and Southeastern Europe, centred in modern Bulgaria. [2] They were bordered by the Scythians to the north, the Celts and the Illyrians to the west, the Greeks to the south, and the Black Sea to the east.

The Thracians were skillful craftsmen. They made beautifully ornate golden and silver objects such as various kinds of vessels, rhytons, facial masks, pectorals, jewelry, weapons, etc. These show strong, and increasing, influence from the neighbouring cultures, especially the Greeks. They used to bury rich hoards of precious objects both to hide them in times of enemy invasions and unrest as well as for ritual purposes. To date, more than 80 Thracian treasures have been excavated in Bulgaria, the cradle of the Thracian civilization. Refer to the map which explicitly shows the territory of present-day Bulgaria. 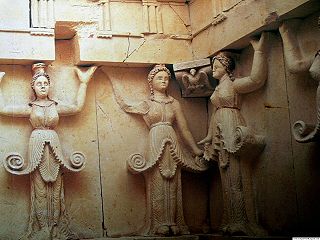 The Thracian Tomb of Svestari is 2.5 km southwest of the village of Sveshtari, Razgrad Province, which is 42 km northeast of Razgrad, in northeast Bulgaria.The tomb is probably the grave of Dromichaetes who was a king of the Getae on both sides of the lower Danube around 300 BC, and his wife, the daughter of King Lysimachus who was a general and diadochus of Alexander the Great. The tomb is a UNESCO World Heritage Site.

The Odrysian Kingdom was a Thracian kingdom that existed from the early 5th century BC at least until the mid-3rd century BCE. It consisted mainly of present-day Bulgaria and parts of Southeastern Romania, Northern Greece and European Turkey. Dominated by the eponymous Odrysian people, it was the largest and most powerful Thracian realm and the first larger political entity of the eastern Balkans. Before the foundation of Seuthopolis in the late 4th century it had no fixed capital. 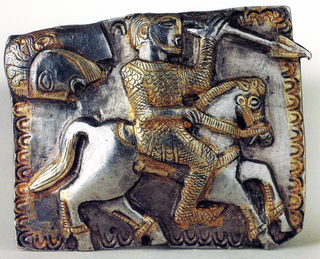 The Thracian religion refers to the mythology, ritual practices and beliefs of the Thracians, a collection of closely related ancient Indo-European peoples who inhabited eastern and southeastern Europe and northwestern Anatolia throughout antiquity and who included the Thracians proper, the Getae, the Dacians, and the Bithynians. The Thracians themselves did not leave an extensive written corpus of their mythology and rituals, but information about their beliefs is nevertheless available through epigraphic and iconographic sources, as well as through ancient Greek writings.

The Panagyurishte Treasure is a Thracian treasure. 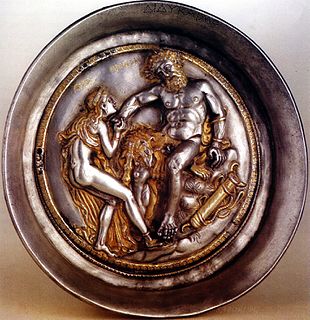 The Rogozen Treasure, called the find of the century, is a Thracian treasure. 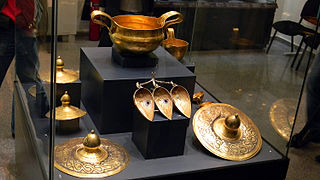 The Valchitran Treasure is an early Thracian treasure. 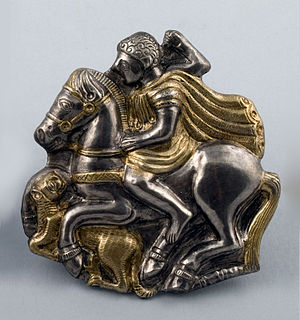 The Lukovit Treasure is a silver Thracian treasure.

Skudra was a province (satrapy) of the Persian Achaemenid Empire in Europe between 510s BC and 479 BC. Its name is attested in Persian and Egyptian inscriptions. It is believed to have comprised the lands now known as Thrace and Macedon. 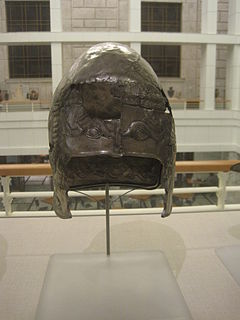 The Helmet of Iron Gates is a Geto-Dacian silver helmet dating from the 4th century BC, housed in the Detroit Institute of Arts, United States. 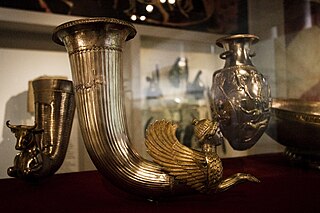 The Borovo Treasure, also known as the Borovo Silver Treasure, is a Thracian hoard of five matching silver-gilt items discovered in late 1974 while ploughing a field in Borovo, Bulgaria. 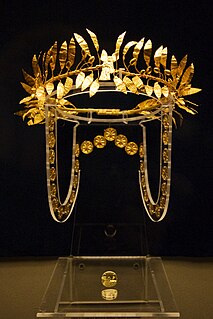 The Golden Orphism Book is a Thracian golden artifact consisting of 6-bound sheets with total weight of 100 grams, with a size 5 to 4.5 cm, made of 23.82-karat gold. Its contents are related to the Orphism, which existed in the Thracian and Hellenistic world. Illustrations of priests, horse-rider, a mermaid, a harp and soldiers, as well as writing in Etruscan, hint at burial process of an aristocrat, devoted to the cult of Orphism. The book can be seen by the public in the National Historical Museum in Sofia

Wikimedia Commons has media related to Thracian treasures .
This page is based on this Wikipedia article
Text is available under the CC BY-SA 4.0 license; additional terms may apply.
Images, videos and audio are available under their respective licenses.