This page is about the sculptor Thrasymedes of Paros. For the mythological Greek captain of the Trojan Wars, see Thrasymedes (mythology).

Thrasymedes /ˌθræsɪˈmiːdiz/ of Paros (Greek : Θρασυμήδης ο Παριανός) was an ancient Greek sculptor. Formerly he was regarded as a pupil of Phidias, because he set up in the temple of Asclepius at Epidaurus a seated statue of that deity made of ivory and gold, which was evidently a copy of the Zeus of Pheidias. But an inscription found at Epidaurus proves that the temple and the statue belong to the 4th century. [1]

Alcamenes was an ancient Greek sculptor of Lemnos and Athens, who flourished in the 2nd half of the 5th century BC. He was a younger contemporary of Phidias and noted for the delicacy and finish of his works, among which a Hephaestus and an Aphrodite "of the Gardens" were conspicuous. 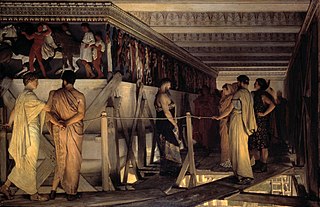 Phidias or Pheidias was a Greek sculptor, painter, and architect. His Statue of Zeus at Olympia was one of the Seven Wonders of the Ancient World. Phidias also designed the statues of the goddess Athena on the Athenian Acropolis, namely the Athena Parthenos inside the Parthenon, and the Athena Promachos, a colossal bronze which stood between it and the Propylaea, a monumental gateway that served as the entrance to the Acropolis in Athens. Phidias was the son of Charmides of Athens. The ancients believed that his masters were Hegias and Ageladas. 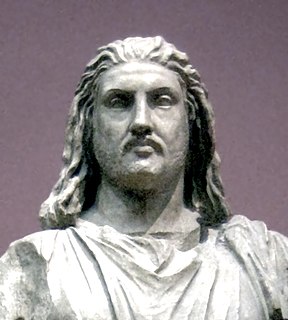 Mausolus was a ruler of Caria, nominally a satrap of the Achaemenid Empire. He enjoyed the status of king or dynast by virtue of the powerful position created by his father Hecatomnus who had succeeded the assassinated Persian Satrap Tissaphernes in the Carian satrapy and founded the hereditary dynasty of the Hecatomnids. He is best known for the monumental shrine, the Mausoleum at Halicarnassus, erected and named for him by order of his widow Artemisia.

Praxiteles of Athens, the son of Cephisodotus the Elder, was the most renowned of the Attica sculptors of the 4th century BC. He was the first to sculpt the nude female form in a life-size statue. While no indubitably attributable sculpture by Praxiteles is extant, numerous copies of his works have survived; several authors, including Pliny the Elder, wrote of his works; and coins engraved with silhouettes of his various famous statuary types from the period still exist.

In Greek as well as Roman mythology, Hygieia, was one of the Asclepiadae; the sons and daughters of the god of medicine, Asclepius, and his wife Epione. Hygieia was the goddess/personification of health, cleanliness and hygiene.

Agoracritus was a famous sculptor in ancient Greece.

Antenor was an Athenian sculptor. He is recorded as the creator of the joint statues of the tyrannicides Harmodius and Aristogeiton funded by the Athenians on the expulsion of Hippias. These statues were carried away to Susa by Xerxes I of Persia during the Greco-Persian Wars. Archaeologists have also established that a basis signed by "Antenor son of Eumares" belonged to a set of female figures in an archaic style which were displayed in the acropolis. The sculptor of the Harmodius and Aristogeiton is usually listed as the son of Euphranor.

Paros is a Greek island in the central Aegean Sea. One of the Cyclades island group, it lies to the west of Naxos, from which it is separated by a channel about 8 kilometres wide. It lies approximately 150 km south-east of Piraeus. The Municipality of Paros includes numerous uninhabited offshore islets totaling 196.308 square kilometres (75.795 sq mi) of land. Its nearest neighbor is the municipality of Antiparos, which lies to its southwest. In ancient Greece, the city-state of Paros was located on the island. 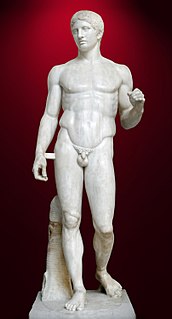 Polykleitos was an ancient Greek sculptor in bronze of the 5th century BC. His Greek name was traditionally Latinized Polycletus, but is also transliterated Polycleitus and due to iotacism in the transition from Ancient to Modern Greek, Polyklitos or Polyclitus. He is called Sicyonius by Latin authors including Pliny the Elder and Cicero, and Ἀργεῖος by others like Plato and Pausanias. He is sometimes called the Elder, in cases where it is necessary to distinguish him from his son, who is regarded as a major architect but a minor sculptor. 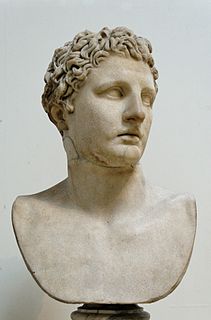 Scopas or Skopas was an Ancient Greek sculptor and architect most famous for his statue of Meleager, the copper statue of "Aphrodite" and the head of goddess Hygieia, daughter of Asclepius.

Isyllus was an ancient Greek poet from Epidaurus.

Archermus was a sculptor of Chios working in the middle of the 6th century BC. His father, Micciades, and his sons, Bupalus and Athenis, were sculptors of marble.

Euphranor of Corinth was a Greek artist who excelled both as a sculptor and as a painter. 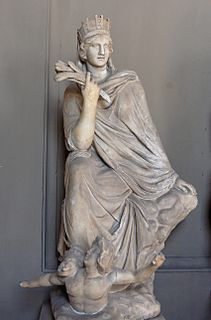 Eutychides of Sicyon in Corinthia, Greek sculptor of the latter part of the 4th century BC, was a pupil of Lysippus. His most noted work was a statue of the Tyche of Antioch, a goddess who embodied the idea of the then newly founded city of Antioch. The Tyche was seated on a rock, crowned with towers, and having the river Orontes at her feet. There is a small copy of the statue in the Vatican. It was imitated by a number of Asiatic cities; and indeed most statues since created that commemorate cities borrow something from the work of Eutychides. 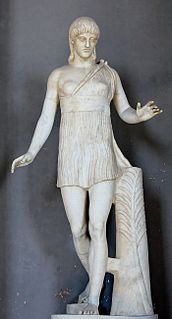 Pasiteles was a Neo-Attic school sculptor from Ancient Rome at the time of Julius Caesar. Pasiteles is said by Pliny to have been a native of Magna Graecia, and to have been granted Roman citizenship. He worked during a period where there was a demand for copies of, or variations on, noted works of Greek sculpture; the demand was met by the workshops of Pasiteles and his pupils Stephanus and Menelaus and others, several of whose statues are extant. According to Pliny, Pasiteles made an ivory statue of Jupiter for the temple of Metellus and made statues for the temple of Juno in the portico of Octavia.

Canachus was a sculptor of Sicyon in Corinthia, of the latter part of the 6th century BCE. He was especially noted as the author of two great statues of Apollo, one in bronze made for the temple at Didyma near Miletus, and one in cedar wood made for Thebes. The coins of Miletus furnish us with copies of the former and show the god to have held a stag in one hand and a bow in the other. The rigidity of these works naturally impressed later critics.

Rhoecus was a Samian sculptor of the 6th century BCE. He and his son Theodorus were especially noted for their work in bronze. Herodotus says that Rhoecus built the temple of Hera at Samos, which was destroyed by fire c. 530 BCE. In the temple of Artemis at Ephesus was a marble figure of night by Rhoecus. His name has been found on a fragment of a vase which he dedicated to Aphrodite at Naucratis. His sons Theodorus and Telecles made a statue of the Pythian Apollo for the Samians.

In Greek mythology, Thrasymedes was a prince of Pylos and a participant in the Trojan War.

Timotheus was a Greek sculptor of the 4th century BC, one of the rivals and contemporaries of Scopas of Paros, among the sculptors who worked for their own fame on the construction of the grave of Mausolus at Halicarnassus between 353 and 350 BC. He was apparently the leading sculptor at the temple of Asklepios at Epidaurus, c. 380 BC. To him is attributed a sculpture of Leda and the Swan in which the queen Leda of Sparta protected a swan from an eagle, on the basis of which a Roman marble copy in the Capitoline Museums is said to be "after Timotheus". The theme must have been popular, judging by the more than two dozen Roman marble copies that survive. The most famous version has been that in the Capitoline Museums in Rome, purchased by Pope Clement XIV from the heirs of Cardinal Alessandro Albani. A highly restored version is in the Museo del Prado, and an incomplete one is in the Yale University Art Gallery, New Haven, Connecticut. 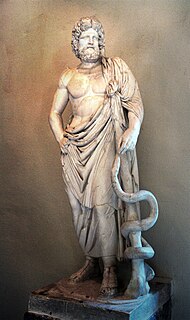 The Temple of Asclepius was a sanctuary in Epidaurus dedicated to Asclepius. It was the main holy site of Asclepius. The sanctuary at Epidaurus was the rival of such major cult sites as the Sanctuary of Zeus at Olympia and Apollo at Delphi. The temple was built in the early 4th-century BC. If still in use by the 4th-century, the temple would have been closed during the persecution of pagans in the late Roman Empire, when the Christian Emperors issued edicts prohibiting non-Christian worship.