Thread of Time – The Best of the Music of Enya (2002) is the fifth album released by the Taliesin Orchestra, and is a tribute to the Irish singer Enya. There have been three other Enya tribute albums released by the Orchestra: Orinoco Flow , An Instrumental Tribute to the Hits of Enya , and Maiden of Mysteries .

The Taliesin Orchestra is an American musical group that specializes in remaking famous songs into orchestra-style melodies. The band's first album, Orinoco Flow: The Music of Enya, was a collection of songs originally created and sung by Enya; it was released in 1996. Since then the band has recorded several other albums, some of them being further Enya remakes, but also including albums of songs by George Winston and Jim Brickman. Originally on Anthem (1997) and again on Rock Rhapsody (2008) the band covered such famous songs such as Pink Floyd's "Another Brick In The Wall", Eric Clapton's "Layla" and The Beatles' "Hey Jude". The band covered the famous music piece "Adagio For Strings"

Eithne Pádraigín Ní Bhraonáin ; born 17 May 1961), known professionally as Enya, is an Irish singer, songwriter and musician. Born into a musical family and raised in the Irish-speaking area of Gweedore in County Donegal, Enya began her music career when she joined her family's Celtic band Clannad in 1980 on keyboards and backing vocals. She left in 1982 with their manager and producer Nicky Ryan to pursue a solo career, with Ryan's wife Roma Ryan as her lyricist. Enya developed her sound over the following four years with multitracked vocals and keyboards with elements of new age, Celtic, classical, church, and folk music. She has sung in ten languages.

The cello ( CHEL-oh; plural cellos or celli) or violoncello ( VY-ə-lən-CHEL-oh; Italian pronunciation: [vjolonˈtʃɛllo]) is a string instrument. It is played by bowing or plucking its four strings, which are usually tuned in perfect fifths an octave lower than the viola: from low to high, C2, G2, D3 and A3. It is the bass member of the violin family, which also includes the violin, viola and the double bass, which doubles the bass line an octave lower than the cello in much of the orchestral repertoire. After the double bass, it is the second-largest and second lowest (in pitch) bowed string instrument in the modern symphony orchestra. The cello is used as a solo instrument, as well as in chamber music ensembles (e.g., string quartet), string orchestras, as a member of the string section of symphony orchestras, most modern Chinese orchestras, and some types of rock bands.

Frank Ricotti is an English jazz vibraphonist and percussionist.

A concerto is a musical composition generally composed of three movements, in which, usually, one solo instrument is accompanied by an orchestra or concert band. It is accepted that its characteristics and definition have changed over time. In the 17th century, sacred works for voices and orchestra were typically called concertos, as reflected by J. S. Bach's usage of the title "concerto" for many of the works that we know as cantatas.

Alfred Whitford (Fred) Lerdahl is the Fritz Reiner Professor of Musical Composition at Columbia University, and a composer and music theorist best known for his work on musical grammar and cognition, rhythmic theory, pitch space, and cognitive constraints on compositional systems. He has written many orchestral and chamber works, three of which were finalists for the Pulitzer Prize for Music: Time after Time in 2001, String Quartet No. 3 in 2010, and Arches in 2011.

Softly, as I Leave You is a 1964 studio album by American singer Frank Sinatra.

The Michael Nyman Band, formerly known as the Campiello Band, is a group formed as a street band for a 1976 production of Carlo Goldoni's 1756 play, Il Campiello directed by Bill Bryden at the Old Vic. The band did not wish to break up after the production ended, so its director, Michael Nyman, began composing music for the group to perform, beginning with "In Re Don Giovanni", written in 1977. Originally made up of old instruments such as rebecs, sackbuts and shawms alongside more modern instruments like the banjo and saxophone to produce as loud a sound as possible without amplification, it later switched to a fully amplified line-up of string quartet, double bass, clarinet, three saxophones, horn, trumpet, bass trombone, bass guitar, and piano. This line up has been variously altered and augmented for some works.

Matthias Kadar, composer, was born in Paris of Hungarian-German parents. After a short study in economics, he decided to concentrate on music and composition.

Zdeněk Lukáš was a prolific Czech composer having composed over 330 works. He graduated from a teachers' college and worked as a teacher from 1953 to 1963. He was a musical editor and program director at the National Broadcasting Company in Pilsen and conducted the Česká píseň, one of the most famous choirs in the Czechoslovakia.

Janet Maguire is an American composer residing in Venice, Italy. 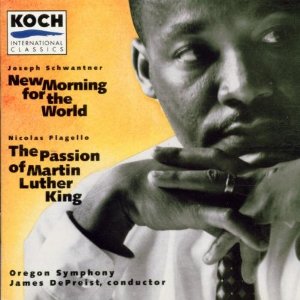 Joseph Schwantner: New Morning for the World; Nicolas Flagello: The Passion of Martin Luther King is a classical music album by the Oregon Symphony under the artistic direction of James DePreist, released by Koch International Classics in 1995. Recorded at the Arlene Schnitzer Concert Hall in Portland, Oregon, in September 1994, the album is a tribute to Martin Luther King, Jr. and was released in his honor on the following holiday in his name.