Three-piece may refer to:

Kingston may refer to: 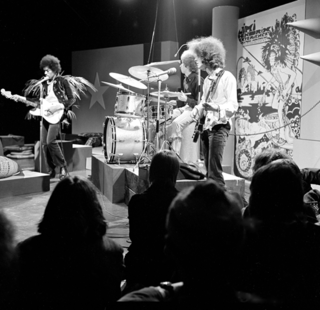 A power trio is a rock and roll band format having a lineup of electric guitar, bass guitar and drum kit, leaving out the second rhythm guitar or keyboard instrument that are used in other rock music bands that are quartets and quintets. Larger rock bands use one or more additional rhythm section to fill out the sound with chords and harmony parts.

Third person, or third-person, may refer to:

Ground may refer to:

A triad, meaning a "group of three". Triad or triade may refer to:

"The Stars and Stripes Forever" is a patriotic American march written and composed by John Philip Sousa. By a 1987 act of the U.S. Congress, it is the official National March of the United States of America.

Zebra is one of several species of the horse genus Equus whose members have distinctive stripes.

Hiro Yamamoto is an American bassist who was a founding member of grunge band Soundgarden, along with Kim Thayil and Chris Cornell in 1984. He left the band in 1989, and two years later, he started the independent rock band Truly together with Screaming Trees drummer Mark Pickerel and Robert Roth from The Storybook Krooks. In 2016, Yamamoto co-founded the surf trio Stereo Donkey.

A witch is a practitioner of witchcraft.

Feathers are epidermal growths which form an outer covering on birds and some dinosaurs.

A nocturne is a musical composition inspired by, or evocative of, night.

Plot or Plotting may refer to:

Standard may refer to: