The three-section staff, triple staff, three-part staff, sansetsukon in Japanese, or originally sanjiegun (Chinese :三節棍; pinyin :sānjiégùn; Jyutping :saam1 zit3 gwan3, or Chinese :三節鞭; pinyin :sānjiébiān three-sectional whip), is a Chinese flail weapon that consists of three wooden or metal staffs connected by metal rings or rope. The weapon is also known as 蟠龍棍 panlong gun, "coiling dragon staff". A more complicated version of the two section staff, the staves can be spun to gather momentum resulting in a powerful strike, or their articulation can be used to strike over or around a shield or other defense.

Although there is no historical evidence to support it, a popular modern-day legend states the weapon was made famous by Zhao Kuangyin, the first Emperor of the Song Dynasty (960 AD). [1]

Historically made of white oak, waxwood, or Chinese red maple, modern staves are constructed from rattan, bamboo, various hardwoods or aluminum. For optimum fit, each of the three sticks should be about the length of the combatant's arm {usually 60 centimetres (24 in) to 70 centimetres (28 in)} and have a combined diameter that easily fits in the hand {usually about 1.25 inches (32 mm)}. These are connected by chains of rings {usually of five inches (127 mm)}; modern versions use ball-and-socket joints.

The total length of the weapon is about the same as the Chinese staff (the gùn), and greater than that of the single staff (known in Japanese as a bō). The larger size of a three-section staff allows for an increased reach compared to the staff. Some of the techniques are similar to that of the staff, so spinning moves over the head and behind the back, such as helicopter spins and neck rolls, can be practised with a regular staff. Other weapon techniques the three-section staff makes use of are similar to that of the pair of sticks used in escrima, a simple short chain, a whip, or the two-section staff. It is therefore advantageous for the user to have some familiarity with these weapons. The three-section staff has the advantage of being usable as a long-range (whip), mid-range (flail or two section staff) or a short-range (pair of escrima) weapon. Acting as an extension of the user's arms, the three-section staff can strike, flail, block, choke, trap, disarm and whip, often with different sections of the staff acting at the same time. The chains or binding ropes of the staff are used to entangle an opponent and their weapons. While it has three ranges, the three-section staff is best used as a short range weapon against longer-ranged weapons. In this configuration, a skilled practitioner can nearly simultaneously block an opponent's strike, trap his or her weapon, and disarm them while executing their own strike with the free end of the staff.

While some martial artists have held that the three-section staff was used on the battlefield to entangle horses' legs or to strike around shields, the complexity of the weapon and the length, difficulty of use, lack of sharp tips or edges and other advantages of such traditional battlefield weapons as spears, polearms (such as the yan yue dao ), swords and so forth meant that the triple staff was more likely restricted to personal self-defense.

One significant weakness of chained weapons in general is a lack of control. At long and intermediate ranges, the strike of one ends not upon impact but on recoil; even the greatest martial arts masters must use valuable time regaining control of their weapon. Due to the length of the staff sections relative to the length of joining chains, the weapon suffers less from a lack of control than other more flexible chain weapons. In short range mode there are no control issues because the end sections are firmly in hand, and the middle section is unable to move independently. Training with the three-section staff is particularly difficult because it is a multi-mode complex weapon, and is not recommended for beginners. Foam covered versions are now sold to aid in training, but the blows received from the ends on recoil are a relatively rare risk. Instead, the greater danger is the painful impact of the chains or metal parts of the staff that the chains are anchored to upon the hands of the user. This occurs when the staff is improperly used in short range mode and the relative positions of staff sections are rapidly changed, serving as a strong deterrent to casual users. However, motivated self teachers will find the three-section staff and other flexible weapons to be the easiest to learn effectively. This is because flexible weapons provide instant feedback to the user. When used improperly, flexible weapons will either impact upon targets other than those desired, put the user off balance, injure the user, or otherwise be obviously out of control.

To experience the versatility of both single-staff and three-section staff, some manufactures have created a combination weapon made out of metal. The three sections, linked by chains as customary for this type of weapon, screw together to form one single staff. The transition to full staff to sectioned staff can be done in mid-combat with a few twists. Against an opponent, the transition is often masked, adding an element of surprise to the following attacks.

The ends of three-section staffs sometimes break, but can be replaced with pieces of similar weight and thickness to the other parts.

The three-section staff was brought to Okinawa from Fujian Province by Shinko Matayoshi, who incorporated it in Matayoshi Kobudo with two kata (sansetsukon dai ichi, sansetsukon dai ni) after 1935. Kobudo sansetsukon typically have shorter (usually 50–60 cm.) yet thicker (about 4–5 cm. in diameter) staffs. The sansetsukon is not to be confused with san bon nunchaku (三本ヌンチャク). 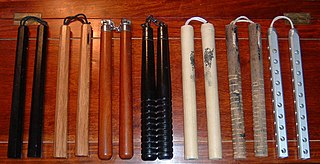 The nunchaku, "nunchucks", "chainsticks", "chuka sticks" or "karate sticks" in English,) is a traditional Okinawan martial arts weapon consisting of two sticks, connected to each other at their ends by a short metal chain or a rope. It is approximately 30 cm(sticks) and 1 inch (rope). A person who has practiced using this weapon is referred to in Japanese as nunchakuka.

The tonfa, also spelled as tongfa or tuifa, also known as T-baton is a melee weapon best known for its role in the armed component of Okinawan martial arts. It consists of a stick with a perpendicular handle attached a third of the way down the length of the stick, and is about 15–20 inches (380–510 mm) long. It was traditionally made from red or white oak, and wielded in pairs. The tonfa is believed to have originated in either China, Okinawa or Southeast Asia, where it is used in the respective fighting styles.

Bōjutsu (棒術), translated from Japanese as "staff technique", is the martial art of stick fighting using a bō, which is the Japanese word for staff. Staffs have been in use for thousands of years in Asian martial arts like Silambam. Some techniques involve slashing, swinging, and stabbing with the staff. Others involve using the staff as a vaulting pole or as a prop for hand-to-hand strikes. 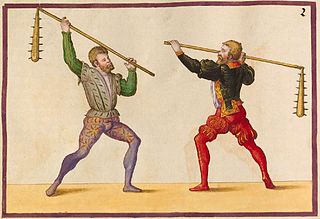 A flail is a weapon consisting of a striking head attached to a handle by a flexible rope, strap, or chain. The chief tactical virtue of the flail was its capacity to strike around a defender's shield or parry. Its chief liability was a lack of precision and the difficulty of using it in close combat, or closely-ranked formations. 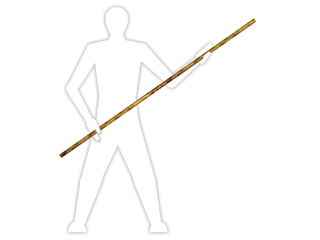 A bō, bong (Korean), pang (Cantonese), bang (Mandarin), or kun (Okinawan) is a staff weapon used in Okinawa. Bō are typically around 1.8 m (71 in) and used in Okinawan martial arts, while being adopted into Japanese arts such particular bōjutsu. Other staff-related weapons are the jō, which is 1.2 m (47 in) long, and the hanbō, which is 90 cm (35 in) long.

A club is a short staff or stick, usually made of wood, wielded as a weapon since prehistoric times. There are several examples of blunt-force trauma caused by clubs in the past, including at the site of Nataruk in Turkana, Kenya, described as the scene of a prehistoric conflict between bands of hunter-gatherers 10,000 years ago.

A kusarigama is a traditional Japanese weapon that consists of a kama on a kusari-fundo – a type of metal chain (kusari) with a heavy iron weight (fundo) at the end. The kusarigama is said to have been developed during the Muromachi period. The art of handling the kusarigama is called kusarigamajutsu.

The chain whip, also known as the soft whip, is a weapon used in some Chinese martial arts, particularly traditional Chinese disciplines, in addition to modern and traditional wushu. It consists of several metal rods, which are joined end-to-end by rings to form a flexible chain. Generally, the whip has a handle at one end and a metal dart, used for slashing or piercing an opponent, at the other. A cloth flag is often attached at or near the dart end of the whip and a second flag may cover the whip's handle. The flag or flags adds visual appeal and produces a rushing sound as the whip swings through the air. The rushing noise also helps the user with identifying the location of the other end, since the weapon moves too fast to be normally noticed by human eyes.

Urumi is a sword with a flexible, whip-like blade, originating in modern-day Kerala in the Indian subcontinent. It is thought to have existed from as early as the Sangam period. 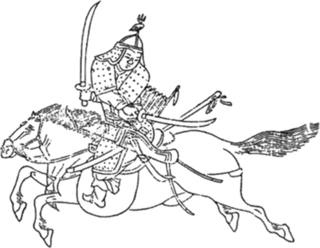 Commissioned in 1790 by King Jeongjo, the Muyedobotongji expanded on the eighteen weapons systems identified in the Muyeshinbo of 1758.

The chigiriki (契木) is a Japanese flail weapon. It consists of a solid or hollow wood or iron staff with an iron weight and chain on the end, sometimes retractable. The chigiriki is a more aggressive variation of the parrying weapon kusarigama. It can be used to strike or entangle the opponent as well as to parry his blows and to capture or incapacitate an opponent's weapon.

Matayoshi Kobudo is a general term referring to the style of Okinawan Kobudo that was developed by Matayoshi Shinpo (又吉眞豊) and Matayoshi Shinko (又吉眞光) during the twentieth century. Martial arts have been practiced by the Matayoshi family for over nine generations and draw influence from Japanese, Chinese and indigenous Okinawan martial arts styles.

The Muyesinbo is a Korean martial arts manual published in 1759. The book is a revision of the older Muyejebo, made during the reign of King Youngjo (1724–1776). It adds twelve disciplines or "skills" of both armed and unarmed fighting by Prince Sado to the original six which were descbribed in the Muyejebo. No copies of the Muyesinbo have survived, but its contents can easily be determined by tracing back and comparing the Muyejebo with the later Muyedobotongji.

The Pyeongon is a nunchaku-like weapon used by the Joseon army and is first mentioned in a martial arts manual called Muyesinbo. The weapon was inspired by the farmer's flail to thresh rice with. In the West it mostly known as a two-section staff.

Shinpo Matayoshi was a martial artist who lived in Naha, Okinawa, during the 20th century.

A gun or bang is a long Chinese staff weapon used in Chinese martial arts. It is known as one of the four major weapons, along with the qiang (spear), dao (sabre), and the jian. It is called, in this group, "The Grandfather of all Weapons". In Vietnam, the gun is known as côn in Vietnamese martial arts.

Tàizǔquán is a style of Chinese martial arts whose name refers to Emperor Tàizǔ of Sòng, the founder of the Sòng dynasty.

The Bian or Tie Bian and Gang Bian, also known as Chinese whip or hard whip, is a type of tubular-shaped club or rod weapon designed to inflict blunt damage with whipping motion.