The three-striped frog is a frog known from southern Thailand and Peninsular Malaysia.

Three-striped frog may also refer to:

Striped ground squirrels form a taxon of squirrels under the subfamily Callosciurinae. They are only found in Southeast Asia. Species in this genus include:

The buff striped keelback is a species of nonvenomous colubrid snake found across Asia. It is the sole species of genus Amphiesma. It is a typically nonaggressive snake that feeds on frogs and toads. It belongs to the subfamily Natricinae, and is closely related to water snakes and grass snakes. It resembles an Asian version of the American garter snake. It is quite a common snake but is rarely seen.

Dendrelaphis caudolineatus is a common species of colubrid snake known commonly as the striped bronzeback or bronze tree snake. It is erroneously called 'garter snake' in the Philippines. It is not venomous and it is the most commonly sold snake as a pet. Though in captivity, they don't live as long as in the wild.

Leptolalax heteropus is a frog species in the family Megophryidae. It is found in the Malay Peninsula, both in Malaysia and southern Thailand. The type locality is Maxwell Hill in Taiping, Perak, Malaysia. Its natural habitats are tropical moist lowland forests, moist montane forests, and rivers. It is not considered threatened by the IUCN.

Amolops larutensis is a species of frog in the family Ranidae that is found in the Malay Peninsula from southernmost Thailand to Malaysia; records further north probably represent A. panhai.

The corrugated frog or rivulet frog, sometimes (ambiguously) called "flat-headed frog", is a species of frog in the family Dicroglossidae found in Brunei, India, Indonesia, Malaysia, Myanmar, Thailand, possibly Bangladesh, and possibly Bhutan. Its natural habitats are subtropical or tropical moist lowland forest, subtropical or tropical moist montane forest, rivers, and intermittent rivers. It is not considered threatened by the IUCN.

The Malesian frog, Malaysian river frog, Malaysian peat frog, or peat swamp frog is a species of frog in the Dicroglossidae family. It is found on the Malay Peninsula, Sumatra, Java, Borneo, and a range of islands on the Sunda Shelf . Its natural habitats are shallow, gentle streams and nearby swampy areas including peat swamps, very flat alluvial forests, and overgrown plantations. It is becoming rare due to habitat loss (deforestation), and to a lesser extent, exploitation.

Polypedates macrotis, commonly known as the dark-eared treefrog, sometimes also Bongao tree frog, Bongao bubble-nest frog, Baram whipping frog, or brown-striped tree frog, is a species of frog in the family Rhacophoridae. It is found in the central peninsular Thailand, Sumatra, Borneo, and Sulu Archipelago as well as a range of other Philippine islands. 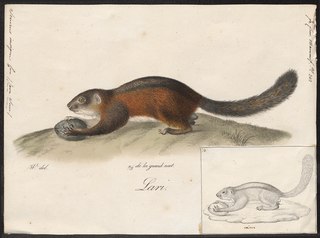 The three-striped ground squirrel is a species of rodent in the family Sciuridae. It is found in Indonesia, Malaysia, and Thailand.

Hylarana macrodactyla is a species of frog in the family Ranidae. It is also known as the Guangdong frog, three-striped grass frog and the marbled slender frog.

Humerana miopus, also known as the Khao Wang frog or three-striped frog, is a frog that was identified in 1918. This species is known from southern Thailand and Peninsular Malaysia, and it is locally common. Hylarana, commonly known as golden-backed frogs, is a widespread genus of true frogs found in tropical Africa, Asia, and Australia. It includes around 84 to 96 valid species. 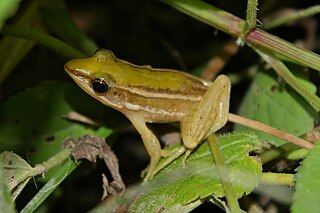 Hylarana taipehensis is a species of true frog, family Ranidae. It has several common names, including Taipei frog, Taipei grass frog, two-striped grass frog, or striped slender frog. It is found in northeastern India, Bhutan, Bangladesh, Myanmar, Thailand, Cambodia, Laos, Vietnam, southern China, Hong Kong, and Taiwan. There is some uncertainty about the identity of specimens from India.

Hylarana signata, commonly known as the striped stream frog, spotted stream frog, or Matang frog, is a species of true frog in the genus Hylarana. It is native to the Malay Peninsula, Sumatra, and Borneo. Its natural habitats are subtropical or tropical moist lowland forests, subtropical or tropical swamps, and rivers. It is not currently considered threatened by the IUCN.

The stream frog is a genus of pyxicephalid frogs native to Africa.

Masked rough-sided frog may refer to:

Pygmy frog may refer to:

Asian tree frog may refer to: