Three-toed woodpecker has been split into the following 2 species:

The American three-toed woodpecker is a medium-sized woodpecker, which is native to North America.

Woodpeckers are near passerine birds of the order Piciformes. They are one subfamily in the family Picidae, which also includes the piculets and wrynecks. They are found worldwide.

Woodpeckers are part of the family Picidae, a group of near-passerine birds that also consist of piculets, wrynecks, and sapsuckers. Members of this family are found worldwide, except for Australia, New Guinea, New Zealand, Madagascar, and the extreme polar regions. Most species live in forests or woodland habitats, although a few species are known that live in treeless areas, such as rocky hillsides and deserts, and the Gila woodpecker specialises in exploiting cacti.

Nine families of largely arboreal birds make up the order Piciformes, the best-known of them being the Picidae, which includes the woodpeckers and close relatives. The Piciformes contain about 71 living genera with a little over 450 species, of which the Picidae make up about half. 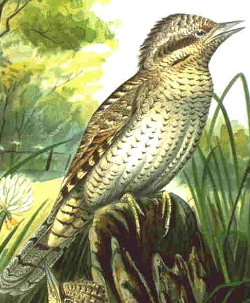 The wrynecks are a small but distinctive group of small Old World woodpeckers. Jynx is from the Ancient Greek iunx, the Eurasian wryneck.

In biology, dactyly is the arrangement of digits on the hands, feet, or sometimes wings of a tetrapod animal. It comes from the Greek word δακτυλος (dáktulos) = "finger". 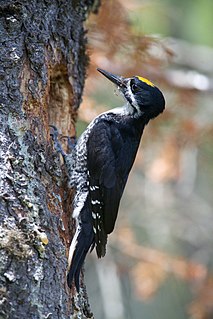 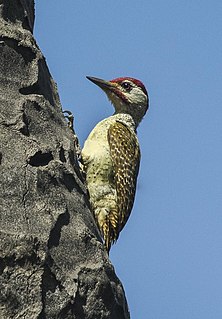 The fine-spotted woodpecker is a bird. It is a widespread and frequently common resident breeder in much of west and central tropical Africa. It is a species associated with open forest, savannah and bush. This bird has a wide range and is a common species, and the International Union for Conservation of Nature has rated its conservation status as being of "least concern". 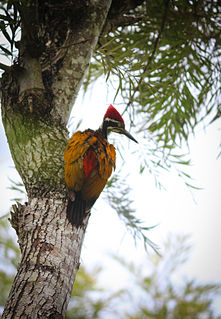 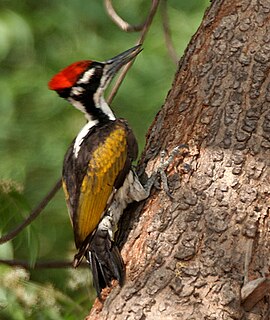 The white-naped woodpecker is a woodpecker which is a widespread but scarce breeder in the Indian Subcontinent.

The lesser yellownape is a type of woodpecker which is a widespread and often common breeder in tropical and sub-tropical Asia, primarily the Indian subcontinent and Southeast Asia. It ranges from India, Bhutan, Nepal, Bangladesh and Sri Lanka eastwards to Thailand, Burma, Cambodia, Laos, Indonesia, Malaysia and Vietnam. Much of the scientific knowledge gathered about this species is sourced from formal studies in various parts of India.

Picoides is a genus of woodpeckers that are native to Eurasia and North America.

Sasia is a genus of birds in the family Picidae, that are native to the Old World. They are very small, virtually tailless woodpeckers, with a crombec or nuthatch-like appearance and foraging habits. Their habitat is forest and secondary growth.

The Lost River State Forest is a state forest located in Roseau County, Minnesota. The forest borders the Canadian province of Manitoba to the north, and parcels belonging to the Red Lake Indian Reservation are within the forest's boundaries. The forest is managed by the Minnesota Department of Natural Resources.

The anatomy of bird legs and feet is diverse, encompassing many accommodations to perform a wide variety of functions. 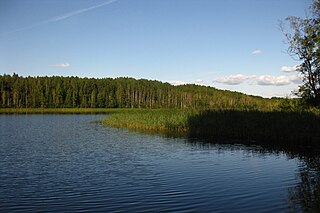 Tündre Nature Reserve is a nature reserve situated in southern Estonia, straddling the border between Viljandi and Valga County.

The dark-bodied woodpecker is a bird in the family Picidae found in southern China. It is usually considered a subspecies of the Eurasian three-toed woodpecker.