Three Bridges may refer to:

Three Bridges is a neighbourhood within the town of Crawley, in the county of West Sussex in England.

Three Bridges Football Club is a football club based in Three Bridges in Crawley, West Sussex, England. The club is affiliated to the Sussex County Football Association. They were established in 1901 and were founding members of the Sussex County League Division Two in 1952. In the 1981–82 season, they reached the Third Round of the FA Vase. Currently they are members of the Isthmian League South East Division. 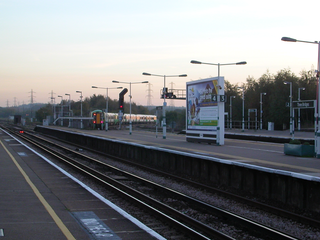 Three Bridges railway station is located in and named after the village of Three Bridges, which is now a district of Crawley, West Sussex, England. It is at the point where the Arun Valley Line diverges from the Brighton Main Line and Thameslink, 29 miles 21 chains (47.1 km) down the line from London Bridge via Redhill.

Riverside, New Jersey may refer to:

Northgate is a neighbourhood within the town of Crawley in West Sussex, England, and includes the town centre. Northgate is bordered by West Green to the west, Langley Green to the north, Three Bridges to the east and Southgate to the south.

Coventry railway station is the main railway station serving the city of Coventry, West Midlands, England. It is situated about 250 yards to the south of junction 6 of the inner ring road. The station is on the Birmingham loop of the West Coast Main Line (WCML), and is at the centre of a junction where the lines to Nuneaton, and to Leamington converge. 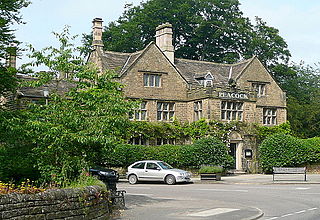 The Pennsylvania Railroad Station was the intermodal passenger terminal for the Pennsylvania Railroad's (PRR) vast holdings on the Hudson River and Upper New York Bay in Jersey City, New Jersey. By the 1920s the station was called Exchange Place in response to local nomenclature. The rail terminal and its ferry slips were the main New York City station for the railroad until the opening in 1910 of New York Pennsylvania Station, made possible by the construction of the North River Tunnels. The terminal was located on Paulus Hook, which in 1812 became the landing of the first steam ferry service in the world, and to which rail service began in 1834. Train service to the station ended in November 1961 and demolition of the building complex was completed in 1963. Part of the former terminal complex is now the PATH system's Exchange Place Station. 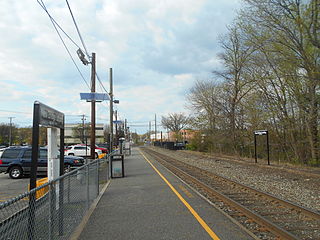 White House is a NJ Transit railroad station on the Raritan Valley Line, in the Whitehouse Station section of Readington in Hunterdon County, New Jersey, United States. The station is on the west side of Main Street in the center and the station building has subsequently been turned into a branch library for the Hunterdon County Library system. This station has limited weekday service and no weekend service.

Annandale is the penultimate station heading westbound on New Jersey Transit's Raritan Valley Line, located in the Annandale section of Clinton Township in Hunterdon County, New Jersey, United States. The station is located just off interchange 18 of Interstate 78 at the junction of Main Street and East Street. The final stop before High Bridge, it has one low-level side platform, with a shelter, 77 parking spaces and bicycle racks.

Holland Brook is a tributary of the South Branch Raritan River in Hunterdon and Somerset Counties, New Jersey in the United States.

Kingsland is a railroad station on New Jersey Transit's Main Line. It is located under Ridge Road (Route 17) between New York and Valley Brook Avenues in Lyndhurst, New Jersey, and is one of two stations in Lyndhurst. The station is not staffed, and passengers use ticket vending machines (TVMs) located at street level to purchase tickets. The station is not handicapped-accessible. Originally part of the Delaware, Lackawanna and Western Railroad's Boonton Branch, Kingsland station was built in 1903.

Hawthorne is a rail station located in Hawthorne, New Jersey in Passaic County. Volunteer Railroaders Association, a non-profit railroad preservation group leases the station from the New York, Susquehanna and Western Railway. The station is single floor wooden structure at grade with the local area. Formerly brown and cream colored, the station has currently been repainted blue-green and red as part of an ongoing restoration. The station once served as the commuter ticket office until June 30, 1966 and was also used as a freight depot building. 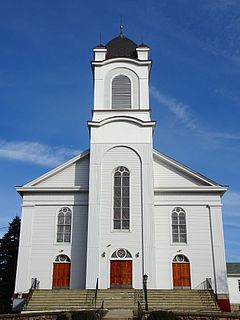 Readington Village is an unincorporated community located within Readington Township in Hunterdon County, New Jersey, United States, that is centered on the converging of Readington Road, Hillcrest Road, Centerville Road and Brookview Road. It is located on Holland Brook, originally named Amanmechunk, which means large creek in the Unami dialect. The area was inhabited by the Raritan prior to the arrival of European settlers. The Native Americans who lived near Readington Village travelled to the coast during the summer for fish and clams. Such a trip is mentioned in an Indian deed transferring lands around Holland Brook to English and Dutch settlers. The deed mentions two of the natives, who lived at Readington: Metamisco and Wataminian.

Dreahook is an unincorporated community in Readington Township in Hunterdon County, New Jersey, United States at the intersection of CR-620/Dreahook Rd and CR 523. The name is a corruption of Driehoek, which is the Dutch word for triangle. It was likely named for the triangle created by the settlement in its relation to the early roads to Flemington, Whitehouse Station, Readington Village and Pleasant Run, which have sense been rerouted. Dreahook Creek and Holland Brook both pass through the area of the former village. Dreahook village once had blacksmith shop, a school and a store. Settlers farmed the land here because of the rich soil along the base of Cushetunk Mountain. There are still numerous farms in the area, including the Readington River Buffalo Farm between Dreahook and Stanton. 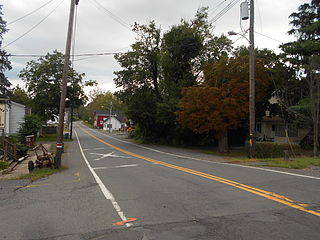 Three Bridges is an unincorporated community located within Readington Township in Hunterdon County, New Jersey, United States, on the South Branch Raritan River. It is named for the three original bridges which crossed the river. 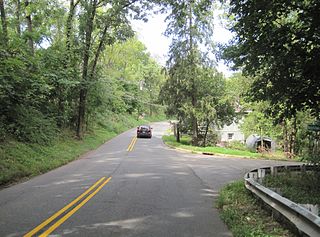 Rockefellows Mills is an unincorporated community located within Raritan Township in Hunterdon County, New Jersey, United States. The settlement is located along the South Branch Raritan River near Three Bridges. The river is spanned in the area by a 1910-constructed Pratt through truss bridge. Most of the area within the Raritan Township side of the river is forested however on the north side of the river in Readington Township, some farmland dots the area.

Englewood is a former railroad station at Depot Square in Englewood, New Jersey. Once served by the Erie Railroad's Northern Branch, the building is located in the city's town center along the ROW now used as a branch line by CSX Transportation. The station at Depot Plaza was one of the original stations upon opening of the Northern Railroad of New Jersey, which included two others in the town, Van Brunts and Highwood. The building has undergone various incarnations as restaurants, a recording studio, and a performing arts school. The proposed Northern Branch Corridor Project extension the Hudson–Bergen Light Rail would pass the station along the line.