Three Chimneys is a historic house in Virginia, United States.

Three Chimneys, also known as the Major James Woods House, is a two-and-a-half-story Georgian style historic house in Nelson County, Virginia. Constructed approximately 1795, the house is one of the oldest standing brick houses in Nelson County, and was added to the Virginia Landmarks Register in September 2013.

Three Chimneys may also refer to:

Three Chimneys Archaeological Site is located at 715 West Granada Boulevard in Ormond Beach, Florida. It was listed on the National Register of Historic Places on September 16, 2010. The three chimneys were of a sugar-processing plant. 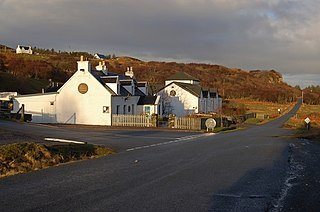 The Three Chimneys is a restaurant in Colbost, Isle of Skye, Scotland. The restaurant was opened in 1985 by Eddie and Shirley Spear. It has won over 30 major awards and in July 2010, was named as one of the New York food critic Frank Bruni's top five favourite restaurants. It was included in the Restaurant magazine list of the world's 50 best restaurants in 2002 and 2003.

All Along was a champion Thoroughbred racemare that was foaled in France. She was one of the top fillies of the last part of the 20th century, racing mostly in Europe.

Martin Luther Davey was an American Democratic politician from Ohio. He was the 53rd Governor of Ohio.

State Farm is a large group of insurance and financial services companies throughout the United States with corporate headquarters in Bloomington, Illinois. The group's main business is State Farm Mutual Automobile Insurance Company, a mutual insurance firm that also owns the other State Farm companies. State Farm is ranked No. 36 on the 2018 Fortune 500 list of the largest United States corporations by total revenue.

Joseph Allen Frear Jr. was an American businessman and politician. A Democrat, he served as a United States Senator from Delaware from 1949 to 1961. 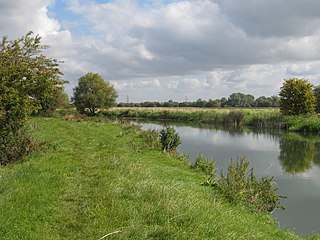 Chimney is a hamlet on the River Thames near Shifford Lock, 6 miles (9.7 km) south of Witney in Oxfordshire. It is part of the civil parish of Aston, Cote, Shifford and Chimney.

Mount Solon is an unincorporated community in Augusta County, Virginia, United States, 22 miles (35 km) southwest of Harrisonburg and 20 miles (32 km) north of Staunton. Mount Solon is located in the 6th US Congressional District. It is part of the Staunton–Waynesboro Micropolitan Statistical Area.

Rahy was a Thoroughbred racehorse who competed in England and the United States. 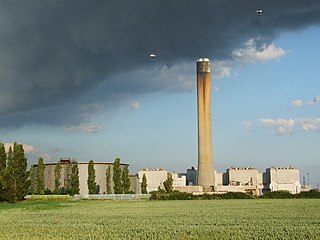 Snively Farm is a historic home and farm located near Eakles Mills, Washington County, Maryland, United States. It is a two-story, three-bay 18th century log structure with an exposed basement at the front elevation on fieldstone foundations. The home features a two-story, three-bay rear addition built in the late 18th or early 19th century with a one-story, two-bay stone kitchen. The property includes a stone springhouse and a frame butchering or outkitchen with a massive stone exterior chimney.

Lansdowne, also known as Upper Deale or Lansdowne Farm, is a historic home and farm complex located at Centreville, Queen Anne's County, Maryland, United States. It consists of a brick dwelling, and a large barn, granary, and several outbuildings. The house was built in two distinct periods. The earliest house dates to the late colonial period and is a two-story, brick house, three bays wide and two rooms deep, with a single flush chimney on each gable. It is attached to a larger, Federal-period house built in 1823. The later house is brick, two and a half stories high, and was built directly adjoining the west gable of the earlier structure.

The 1865 Memphis earthquake struck southwest Tennessee near the Mississippi River in the United States on August 17 that year. Soon after the Mfa  5.0 earthquake hit, observers said the earth appeared to undulate and waves formed in nearby rivers. The force of the earthquake felled and cracked chimneys in Memphis and New Madrid, Missouri on the other side of the Mississippi. Shaking from the earthquake spread as far as St. Louis, Missouri; Jackson, Mississippi; and Illinois. Apart from the 1811–12 New Madrid earthquakes, only three major events have struck the state of Tennessee, in 1843, 1865, and 1895. Several minor events have taken place as well. 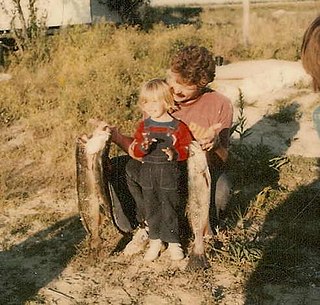 South Bowers is an unincorporated community in Kent County, Delaware, United States. South Bowers is located on the Delaware Bay on the south side of the Murderkill River opposite Bowers. It was a part of the James D. Sipple home farm containing 421 acres of upland, marsh and beachland and he subdivided a small part of the farm into the lots comprising South Bowers before he died in 1890. His son, James H. Sipple acquired the interests of his siblings and conveyed the farm to his daughter, Sarah E. Webb in 1920.

The DeFries House, Barn and Carpenter Shop are a collection of historic buildings located north of Baldwin, Iowa, United States. They are three of over 217 limestone structures in Jackson County from the mid-19th century, of which 101 were houses, nine were barns, and 36 were other farm related buildings. The stones used in the construction are of various sizes and shapes and laid in courses. The double end chimneys on the house are found on only two other stone houses in the county, and the DeFries and Thomas Slye houses have them constructed in brick. Also similar to the Slye house is the use of jack arches instead on lintels above the windows and doors. It is possible that both houses were constructed by the same stonemason. While the stonemason for the Syle house is unknown, Christian Blessing, who was trained in his native of Germany, built this collection of buildings. He completed the house in 1858 and the horse barn in 1862. The carpenter shop was built in either 1858 or 1862.

Kent Leonhardt is the West Virginia Commissioner of Agriculture, having been elected in November 2016, he took office January 2017. He is a member of the United States Republican Party.