Three Days as the Crow Flies

The book opens with Crow Shade, the protagonist, showering and getting dressed for the day. Crow is an African-American who lives in an under-furnished room in a boarding house in the Bedford-Stuyvesant section of Brooklyn. He has an expensive cocaine habit. Withdrawing from the cocaine and desperate for another high, Crow resolves to visit his friend Danny, an artist, and borrow one hundred dollars.

He arrives at Danny's apartment/studio only to find it empty. At that point, Crow impulsively decides to steal three of Danny's paintings and sell them for drug money. On his way out of the apartment, Crow also steals the manuscript that Danny has been working on so that he will have something to read on the train to Manhattan.

Crow eventually ends up in Astor Place and heads for the sculpture in the square. He makes an unsuccessful attempt to sell the paintings before a white man named Bones Young strikes up a conversation. Bones, the son of a wealthy hippies, sells art. He offers to help Crow sell the paintings. After sharing a cigarette the two men head east to the Lower East Side.

When the men arrive in the Lower East Side, they meet up with Candy, an old friend of Bones and a follower of the art scene. The two take him to the art gallery, which had been converted from a bodega. There they meet Geoff, a married straight man who adopts an exaggerated effeminate posture. Geoff racially insults Crow, who pulls his wig off in front of everyone. Crow then tries to leave but Candy stops him and convinces him to stay. Geoff eventually apologizes and offers to host a showing of Crow's work. He also suggests that Crow come up with more paintings as the three he previously showed Geoff aren't enough for a whole shoe.

The group eventually end up at Club Chaos and meet up with Melissa. Melissa is a beautiful fifty-something mixed race woman. She gets Crow to recite poetry with her. After Crow leaves she reads his tarot cards, immediately sensing that there is more to Crow's story than she was led to believe.

Later that night, Crow spends the night with Candy although they don't have sex. Early the next day, Melissa wakes the two by playing a flute underneath Candy's window. The three head to yet another club from there. Bones and Geoff show up and Bones, who has become jealous of the attention that Candy is showing to Crow, elbows Crow in the back of the head. The two men argue for a bit before Candy and Melissa lead Crow out of the club. The trio catches a cab to Melissa's house, a five-story townhouse. The three sleep for a few hours before Melissa wakes Crow up and asks him to paint more paintings for the showing that Geoff arranged for him. Although Crow momentarily worries that he will be found out, he goes downstair in Melissa's studio and, drawing on the information that Danny has imparted to him previously, paints three pictures.

Melissa is impressed with them. She arranges to have a friend, Burt, drive her and the others to the gallery for the showing. When Burt shows up, he insults Crow, touching off another tense confrontation. Melissa defuses the situation by chanting an incantation that terrifies Burt. She demands that she turn over the keys to his car and she, Crow, Candy, and Bones, who had previously arrived, head to the gallery.

The show is a huge success. All of the paintings are sold and Crow makes six thousand dollars minus commission. He is elated but begins to feel guilty about stealing Danny's art work and resolves to give Danny a cut of the money.

Candy, Bones, and Crow then accompany Geoff back to his home in suburban New Jersey (using Burt's car) to help him placate his angry wife. The four then ride back into the city and go to Melissa's house. After getting high again, Crow begins to tire of the non-stop party. Everyone except Bones agrees and they leave Melissa's house. Bones and Crow walk Candy part way home and Crow heads off to Brooklyn. Bones, who does not want to be alone, begs to go along with Crow. Crow reluctantly agrees and the two board the train. Bones falls asleep.

When the two men reach Brooklyn, Crow makes several unsuccessful attempts to wake Bones up. He then decides to leave without him, leaving a note under his arm. Deciding to put off going to Danny's house, Crow steps into the Palm Coast Bar, an after-hours spot and notorious drug den. The police raid the bar. Crow is able to throw his drugs on the floor before the police see him snorting up. He is patted down by a police officer who doesn't find anything on him and leads him toward the door to release him. On the way out, he bumps into Sergeant Dobson, an old friend of Crow's late police officer father.

Sergeant Dobson expresses sorrow that Crow is using drugs and tells Crow that his mother, who hasn't seen him since Crow's father's funeral, is worried about him. He also shares that his own son died of a heroin overdose. He promises to let Crow go if he agrees to go to rehab. Crow, who had already considered getting clean, agrees and accepts Sergeant Dobson's card. Dobson cuffs him and puts Crow into the cruiser (so that the others don't think Crow informed on anyone) and drop him off in front of his house. Crow then makes his way to Danny's house. He decides to tell the complete truth (as well as turn over Danny's share of the money) and ask for Danny's help in getting clean.

The Crow: City of Angels is a 1996 American superhero film directed by Tim Pope. It is a sequel to the 1994 film The Crow and the second installment in The Crow film series. 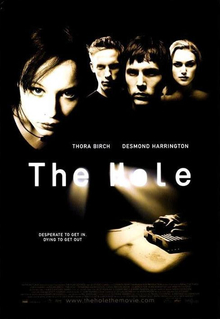 The Hole is a 2001 British psychological horror thriller film directed by Nick Hamm, and starring Thora Birch and Desmond Harrington, with Daniel Brocklebank, Laurence Fox, Keira Knightley, and Embeth Davidtz in supporting roles. Based on the novel After the Hole by Guy Burt, Birch, Harrington, Fox, and Knightley a group of English public school students who, upon spending a weekend partying in an underground shelter, find themselves locked inside.

Children of the Red King is a series of eight children's fantasy, school and adventure novels written by British author Jenny Nimmo, first published by Egmont 2002 to 2009. It is sometimes called "the Charlie Bone series" after its main character. A series of five books was announced in advance, completed in 2006, and sometimes the books were called the "Red King Quintet" until its continuation.

Hannah Ashworth is a fictional character from the British Channel 4 soap opera, Hollyoaks, played by Emma Rigby. Hannah first appeared on-screen on 30 September 2005 and her last appearance was on 12 February 2010.

Two Much is a 1995 romantic screwball comedy film based on Donald Westlake's novel of the same name, and is also a remake of the 1984 French comedy film Le Jumeau, which was also based on Westlake's novel. Directed by Fernando Trueba, Two Much stars Antonio Banderas, Melanie Griffith, Daryl Hannah and Danny Aiello. It was released in the United States by Touchstone Pictures and Metro-Goldwyn-Mayer in other countries. Lew Soloff performed music for the film.

As the Crow Flies is a novel by Jeffrey Archer. The novel was originally published in hardback by HarperCollins in May 1991. HarperCollins and Random House both published paperback version of this book in 1992.

The Clockwise Man is a BBC Books original novel written by Justin Richards and based on the long-running British science fiction television series Doctor Who. It was published on 19 May 2005, alongside The Monsters Inside and Winner Takes All. It features the Ninth Doctor and Rose Tyler. 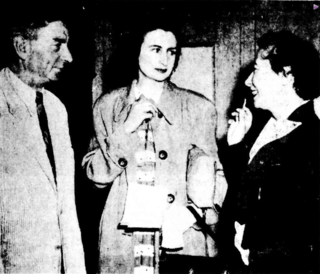 Rosemary de Brissac Dobson, AO was an Australian poet, who was also an illustrator, editor and anthologist. She published fourteen volumes of poetry, was published in almost every annual volume of Australian Poetry and has been translated into French and other languages. 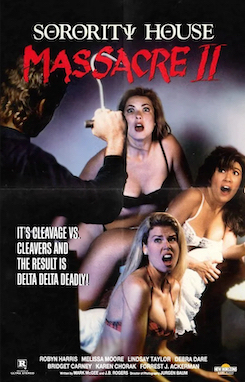 Just Stupid! is the third book in the Just! series by Andy Griffiths. It contains various silly short stories, about things such as snail-shell repairing, baby pram riding, and nonsense dreams. 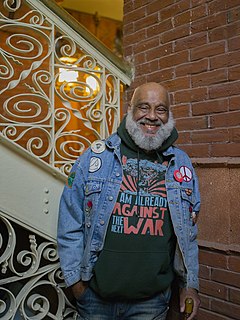 Daniel "Danny" Simmons Jr. is a Neo-African abstract expressionist painter, a published author, poet and philanthropist. He is the older brother of hip-hop impresario Russell Simmons and rapper Joseph Simmons. He is the co-founder and Chairman of Rush Philanthropic Arts Foundation, which provides disadvantaged urban youth with arts access and education. As part of Rush Philanthropic, Simmons also founded Rush Arts Gallery and soon thereafter converted part of his loft in Brooklyn into the Corridor Gallery. Both galleries provide exhibition opportunities to early and mid-career artists who do not have commercial representation through galleries or private dealers. Along with his brother Russell, Simmons established Def Poetry Jam, which has enjoyed long-running success on HBO. In 2004, Simmons published Three Days As the Crow Flies, a fictional account of the 1980s New York art scene. He has also written a book of artwork and poetry called I Dreamed My People Were Calling But I Couldn't Find My Way Home. He has also published " Deep in your best reflection" and "the Brown beatnik tomes", two additional volumes of poetry. In 2015 Simmons moved to Philadelphia and opened Rush Arts Philadelphia gallery (RAP) to further the Rush Arts mission and to begin to create a national presence for the service organization.

Everybody's Fine is a 2009 American drama film written and directed by Kirk Jones, and starring Robert De Niro, Drew Barrymore, Sam Rockwell and Kate Beckinsale. It is a remake of Giuseppe Tornatore's Italian film Everybody's Fine. In Brazil, Russia and Japan the film was released direct-to-DVD.

"Frame Toby" is the ninth episode of the fifth season of the television series The Office, and the show's eighty-first episode overall. The episode aired in the United States on November 20, 2008 on NBC. 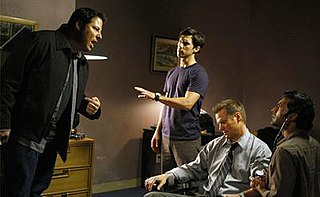 "Cold Wars" is the seventeenth episode of the third season of the NBC science fiction drama series Heroes and fifty-first episode overall. The episode aired on February 23, 2009.

"My Two Young Men" is the 129th episode of the ABC television series, Desperate Housewives. It is the eighteenth episode of the show's sixth season and aired on March 21, 2010. This episode gathered 10.84 million Americans according to Nielsen Media Research.

Trance is a 2013 British psychological thriller film directed by Danny Boyle with a screenplay by Joe Ahearne and John Hodge from a story by Ahearne. The film stars James McAvoy, Vincent Cassel, and Rosario Dawson. The world premiere of the film was held in London on 19 March 2013.