The Three Evils (simplified Chinese :三个势力; traditional Chinese :三個勢力; lit. 'three forces/influences') is a political slogan of the People's Republic of China defined as terrorism, separatism (or "splittism") and religious extremism. The phrase refers to declared counter-terrorism operations undertaken by China, Central Asian republics, and Russia, primarily as related to Xinjiang. [1] [2] The Chinese government views each of the Three Evils as interrelated phenomena driving persistent instability in the westernmost province of Xinjiang, and the slogan has been deployed extensively in support of Xinjiang internment camps since 2017. [3]

Xinjiang is the westernmost province of China and the historical home of the Uyghur people, who speak a language unrelated to Chinese and predominantly practice Islam. The region has been the site of significant tensions under Chinese rule, and attempted to declare independence first as the short-lived First and Second East Turkestan Republics in 1933 and 1944, respectively, ultimately being occupied by the People's Liberation Army in 1949. [4]

China first seriously faced issues of ethnic violence in Xinjiang beginning in the 1990s, such as with the 1990 Baren Township riot, though such incidents were generally classified as "social unrest" until after the September 11 attacks, when the government began to refer to them more in terms of terrorism. [5] Much of the Uyghur discontent stemmed from economic inequality between Uyghurs and Han Chinese migrants, suppression of Uyghur religious practices, and state preference for Han over Uyghur culture, among other issues. [6] Counterterrorism became a much larger Chinese government priority overall after the ascension of Xi Jinping in 2012; following a lull from 2001-2007, militant and terrorist activity had increased notably. [7]

Human Rights Watch has criticized counter-terrorism cooperation by members of the Shanghai Cooperation Organisation in targeting the three evils, accusing the members' governments of violating international laws regarding human rights. [1] Holly Cartner, Europe and Central Asia director at Human Rights Watch, said, "For many years SCO governments have been criticized for their poor human rights records. The SCO's policies could worsen human rights conditions and seek to justify abuse. It's therefore imperative that the European Union and the United States place even greater emphasis on human rights issues in the region." [1]

The Shanghai Cooperation Organisation (SCO), also known as the Shanghai Pact, is an Eurasian political, economic, and security alliance. It is the world's largest regional organisation in geographic scope and population, covering three-fifths of the Eurasian continent, 40% of the world population, and more than 20% of global GDP. 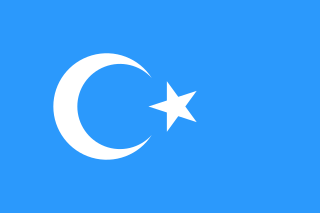 The East Turkestan independence movement is a political movement that seeks the independence of East Turkestan, a large and sparsely-populated region in northwest China, as a homeland for the Uyghur people, who are primarily of Turkic rather than Sinitic ethnic extraction. The region is currently administered as a province-level subdivision of the People's Republic of China (PRC), under the official name Xinjiang Uyghur Autonomous Region (XUAR). Within the movement, there is widespread support for the region to be renamed, since "Xinjiang" is seen by independence activists as a colonial name. "East Turkestan" is the best-known proposed name. "Uyghurstan" is another well-known proposed name.

The East Turkestan Liberation Organization (ETLO) was a secessionist Uyghur organization that advocated for an independent Uyghur state named East Turkestan in the Western Chinese province known as Xinjiang. The organization was established in Turkey in 1990 or 1996 to fight against the Chinese government in Xinjiang, a territory of ethnic Uyghur majority. ETLO is a designated terrorist organization by the governments of China, Kazakhstan, and Kyrgyzstan.

The January 2007 Xinjiang raid was carried out on January 5, 2007 by the Chinese police against a suspected East Turkestan Islamic Movement (ETIM) training camp in Akto County in the Pamir plateau.

Prior to the 2001 invasion of Afghanistan, the Islamic Movement of Uzbekistan (IMU) posed the greatest threat to the Karimov administration. In 2002 the IMU was reclassified as terrorist by the United States. Since the invasion, the IMU has been greatly weakened due to US military actions which cut off its supply of resources and killed its leader, Juma Namangani.

Terrorism in China refers to the use or threatened use of violence to effect political or ideological change in the People's Republic of China. The definition of terrorism differs among scholars, between international and national bodies and across time and there is no legally binding definition internationally. In the cultural setting of China, the term is relatively new and ambiguous.

The threat of terrorism in Kazakhstan plays an increasingly important role in relations with the United States which in 2006 were at an all-time high. Kazakhstan has taken Uzbekistan's place as the favored partner in Central Asia for both Russia and the United States. Kazakhstan's counter-terrorism efforts resulted in the country's 94th ranking among 130 countries in the 2016 Global Terrorism Index published by the Institute of Economics and Peace. The higher the position on the ranking is, the bigger the impact of terrorism in the country. Kazakhstan's 94th place puts it in a group of countries with the lowest impact of terrorism.

China–Turkey relations refers to the international relations between China and Turkey. Current official relations were established in 1934 and Turkey recognized the People's Republic of China (PRC) on 5 August 1971.

The World Uyghur Congress (WUC) is an international organization of exiled Uyghur groups that aspires to "represent the collective interest of the Uyghur people" both inside and outside of the Xinjiang Uyghur Autonomous Region of the People's Republic of China. The World Uyghur Congress describes itself as a nonviolent and peaceful movement that opposes what it considers to be the Chinese occupation of East Turkestan and advocates rejection of totalitarianism, religious intolerance and terrorism as an instrument of policy. The Congress is funded in part by the National Endowment for Democracy or NED of the United States. It has been called a terrorist organization by the Chinese government and Chinese state-controlled media. 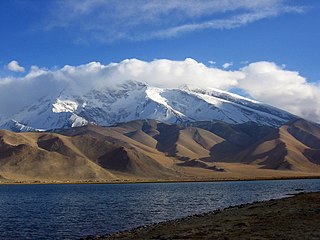 Xinjiang, officially the Xinjiang Uygur Autonomous Region (XUAR) and formerly romanized as Sinkiang, is a landlocked autonomous region of the People's Republic of China (PRC), located in the northwest of the country close to Central Asia. Being the largest province-level division of China and the 8th-largest country subdivision in the world, Xinjiang spans over 1.6 million square kilometres (620,000 sq mi) and has about 25 million inhabitants. Xinjiang borders the countries of Mongolia, Russia, Kazakhstan, Kyrgyzstan, Tajikistan, Afghanistan, Pakistan and India. The rugged Karakoram, Kunlun and Tian Shan mountain ranges occupy much of Xinjiang's borders, as well as its western and southern regions. The Aksai Chin and Trans-Karakoram Tract regions, both administered by China, are claimed by India. Xinjiang also borders the Tibet Autonomous Region and the provinces of Gansu and Qinghai. The most well-known route of the historic Silk Road ran through the territory from the east to its northwestern border.

Uyghurs in Kazakhstan(Kazakh: Қазақстандағы ұйғырлар) or Uyghur Kazakhstanis, are a Turkic ethnic group who primarily practice Islam. Uyghurs form the country's fifth-largest ethnic group, according to the 2009 census. 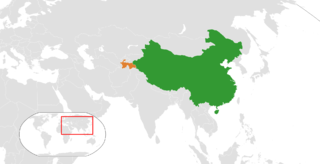 The People's Republic of China and the Republic of Tajikistan have friendly relations characterized by bilateral and multilateral collaboration. 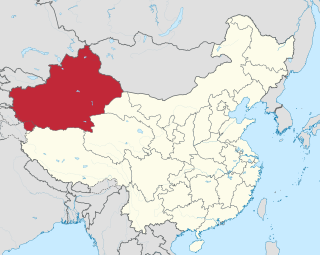 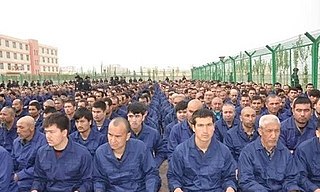 The Xinjiang internment camps, officially called vocational education and training centers by the government of China, are internment camps operated by the government of the Xinjiang Uygur Autonomous Region and its Chinese Communist Party (CCP) provincial committee. Human Rights Watch says that they have been used to indoctrinate Uyghurs and other Muslims since 2017 as part of a "people's war on terror", a policy announced in 2014. The camps have been criticized for alleged human rights abuses, including mistreatment, rape, and torture, by the governments of many countries and human rights organizations, with some of them alleging genocide. Some 40 countries around the world have called on China to respect the human rights of the Uighur community, including countries like Canada, Germany, Turkey, Honduras and Japan. The governments of more than 35 countries have expressed support for China's government.

In May 2014, the Government of China launched the "Strike Hard Campaign against Violent Terrorism" in the far west province of Xinjiang. It is an aspect of the Xinjiang conflict, the ongoing struggle by the Chinese Communist Party (CCP) and the Chinese government to manage the ethnically diverse and tumultuous province. According to critics, the CCP and the Chinese government have used the global "war on terror" of the 2000s to frame separatist and ethnic unrest as acts of Islamist terrorism to legitimize its counter-insurgency policies in Xinjiang. Chinese officials have maintained that the campaign is essential for national security purposes.

Civil Servant-Family Pair Up is a governmental policy that forces designated families to be matched with civil servants to form a nominal kinship, with the families forced to host the civil servants in their home. Since the late 2010s, China has vigorously promoted the pair up policy in Xinjiang. Hosting requirements have increased over time across counties and prefectures, ranging from 5 days per month to 14 days per month. Despite this, overseas Uyghurs have stated that 'visitation' times often exceeded the time requirement, with one stating that visits regularly occurred up to four times per week and eventually became full-time. Refusal to host leads to imprisonment in an internment camp. 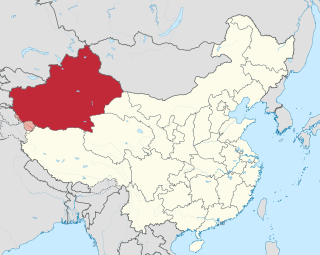 The Xinjiang papers are a collection of more than 400 pages of internal Chinese government documents describing the government policy regarding Uyghur Muslims in the Xinjiang region. In November 2019, journalists Austin Ramzy and Chris Buckley at The New York Times broke the story that characterized the documents as "one of the most significant leaks of government papers from inside China's ruling Communist Party in decades." According to the The New York Times, the documents were leaked by a source inside the Chinese Communist Party and include a breakdown of how China created and organized the Xinjiang internment camps.

The Uyghur genocide is the characterization of the series of ongoing human rights abuses committed by the government of China against Uyghurs and other ethnic and religious minorities in Xinjiang as genocide. Since 2014, the Chinese government, under the administration of Chinese Communist Party (CCP) General Secretary Xi Jinping, has pursued policies that incarcerated more than an estimated one million Turkic Muslims in internment camps without any legal process. This is the largest-scale detention of ethnic and religious minorities since World War II. Thousands of mosques have been destroyed or damaged, and hundreds of thousands of children have been forcibly separated from their parents and sent to boarding schools.

The C5+1 is a diplomatic summit that has been held every year since 2015 between the foreign ministers of the five Central Asian countries of Kazakhstan, Kyrgyzstan, Tajikistan, Turkmenistan, and Uzbekistan, with the United States Secretary of State to discuss and work on common issues of concern to improve and strengthen the U.S. relationship with the five Central Asian states, but to also enhance the relations between the individual nations in Central Asia. The format is used to discuss regional issues such as the war in Afghanistan, the Syrian civil war, the War on terror, combatting drug and human trafficking, economic issues regarding trade relations, job growth in the region, and combatting environmental issues.