The Three Fanzhen of Hebei (Chinese :河朔三镇; pinyin :Hé shuò sān zhèn) were three regions of what is now Hebei, China governed by powerful jiedushi during the Tang dynasty (618–907). After the devastating An Lushan Rebellion, this area became virtually independent of the central government, as these regions were controlled by ex-rebel generals who had substantial territory and forces. The independence of these fanzhen threatened the central government of the Tang dynasty.

During and after the An Lushan Rebellion, the Tang court lost control of vast swathes of territory and a number of defense commands evolved into autonomous kingdoms, their military commissioners became warlords, only nominally subservient to the Tang court. Particularly recalcitrant were Chéngdé (成德), Lúlóng (盧龍) and Wèibó (魏博) in the Hebei area. The central court was all but helpless in the northeast. In the south, however, it took a much more aggressive stand against such defense commands as Zīqīng (淄青) (mainly in Shandong), Biànsòng (汴宋) (in east Henan), and Huáixī (淮西) (in south Henan), which posed a more immediate and palpable threat to the transportation of strategic grains through the Grand Canal, on which the court depended.

"Ever since the Anshi Rebellion, the three Fanzhen have not been part of the country. Although Liu Zong briefly gave the area to the central government, in the end it became independent and 80 million strings of cash were wasted. These regions are fought over frequently; one day Zhicheng has it, the next day Zaiyi. As long as the jiedushi can fend off the northern barbarians, we will not care about its allegiance." 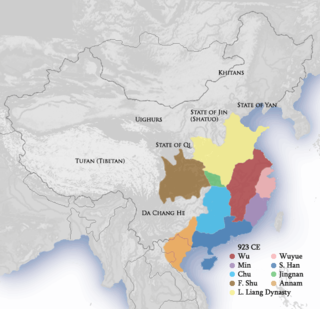 The Five Dynasties and Ten Kingdoms period (907–979) was an era of political upheaval and division in 10th-century Imperial China. Five states quickly succeeded one another in the Central Plain, and more than a dozen concurrent states were established elsewhere, mainly in South China. It was the last prolonged period of multiple political divisions in Chinese imperial history. 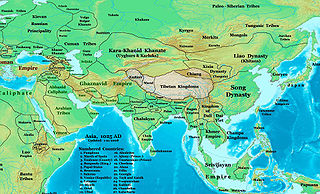 The An Lushan Rebellion was a rebellion against the Tang dynasty of China. The rebellion's overt phase began on 16 December 755, when general An Lushan mobilized his army and marched to Fanyang, and ended when his Yan dynasty fell on 17 February 763. This event is also known as the An–Shi Rebellion or An–Shi Disturbances, as it continued after An Lushan's death under his son An Qingxu, his deputy and successor Shi Siming, and Shi's son and successor Shi Chaoyi, or as the Tianbao Rebellion (天寶之乱), as it began in the 14th year of that era. The rebellion spanned the reigns of three Tang emperors against the rival Yan Dynasty before it was finally quashed. Besides the Tang dynasty loyalists, others involved were anti-Tang forces, especially those in An Lushan's base area in Hebei and Sogdian forces or influences, among others. The rebellion and subsequent disorder resulted in a huge loss of life and large-scale destruction. It significantly weakened the Tang dynasty and led to the loss of the Western Regions. The Tang dynasty hired 4,000 mercenaries from Abbasid territories and the Uyghur Khaganate intervened for the Tang dynasty against An Lushan.

Li Shangyin, courtesy name Yishan, was a Chinese poet and politician of the late Tang Dynasty, born in Henei. He was "rediscovered" in the 20th century by young Chinese writers. He is noted for the imagist quality of his poems as well as his tantalizing "no title" (無題) poems. 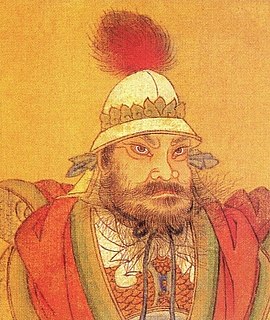 An Lushan or An Lu-shan was a general in the Tang dynasty and is primarily known for instigating the An Lushan Rebellion. 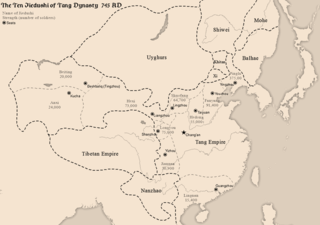 The jiedushi was a title for regional military governors in China which was established in Tang dynasty. It was abolished in Yuan dynasty. The post of jiedushi has been translated as "military commissioner", "legate", or "regional commander". Originally introduced in 711 to counter external threats, the jiedushi were posts authorized with the supervision of a defense command often encompassing several prefectures, the ability to maintain their own armies, collect taxes and promote and appoint subordinates.

Ye or Yecheng was an ancient Chinese city located in what is now Linzhang County, Handan, Hebei province and neighbouring Anyang, Henan province.

Fanzhen, also called fangzhen, was a governmental system involving administration through regional governors (jiedushi). The term fanzhen literally means "buffer town", and refers to the strategic settlement of troops in locations along the empire's border areas. During the Tang dynasty, these settlements came under the control of provincial military commissioners, otherwise known as jiedushi. During the late Tang period, the phenomenon of fanzhen domination has been termed fanzhen geju by historians.

Lingyan Pavilion was a small tower beside Sanqing Hall (三清殿) in the southwest of Taiji Palace (太極宮), Chang'an, the capital of the Tang dynasty. Its location in modern China is roughly in the north of Xi'an, Shaanxi.

Xue Song, formally the Prince of Pingyang (平陽王), was a general of the Chinese rebel state Yan, who later submitted to and became a general of Tang Dynasty, from which Yan had rebelled. As was in the case of several other Yan generals who submitted to Tang but who had substantial army and territorial holdings, Xue was allowed to retain his command and territory, semi-independent of the Tang imperial government structure.

Li Baochen (李寶臣), originally named Zhang Zhongzhi (張忠志), courtesy name Weifu (為輔), known as An Zhongzhi (安忠志) during the Anshi Rebellion and Zhang Baochen (張寶臣) 778–779, formally the Prince of Longxi (隴西王), was a general of the Chinese rebel state Yan, who later submitted to and became a general of Tang Dynasty, from which Yan had rebelled. As was in the case of several other Yan generals who submitted to Tang but who had substantial army and territorial holdings, Li was allowed to retain his command and territory, semi-independent of the Tang imperial government structure.

Tian Chengsi, formally the Prince of Yanmen, was a general of the Chinese rebel state Yan, who later submitted to and became a general of Tang Dynasty, from which Yan had rebelled. As was in the case of several other Yan generals who submitted to Tang but who had substantial army and territorial holdings, Tian was allowed to retain his command and territory, semi-independent from the Tang imperial government structure, and among these generals, he was particularly defiant of the Tang imperial government.

Li Huaixian was a general of the Chinese rebel state Yan, who later submitted to and became a general of Tang Dynasty, from which Yan had rebelled. As was in the case of several other Yan generals who submitted to Tang but who had substantial army and territorial holdings, Li was allowed to retain his command and territory, semi-independent of the Tang imperial government structure, but unlike the others, he was unable to hold on to power for long and was assassinated on 8 July 768 by his subordinates Zhu Xicai, Zhu Ci, and Zhu Tao.

Kong Xun, known early in his life as Zhao Yinheng (趙殷衡), also having used surnames of Li (李) and Zhu (朱) early in life, was an official of the Chinese Five Dynasties and Ten Kingdoms period states Later Liang and Later Tang. He became prominent during the reign of Emperor Mingzong of Later Tang due to his alliance with Emperor Mingzong's trusted advisor An Chonghui, but later had a fallout with An, was ejected from the central government, and would not return to it toward the end of his life.

Ji or Jicheng was an ancient city in northern China, which has become the longest continuously inhabited section of modern Beijing. Historical mention of Ji dates to the founding of the Zhou dynasty in about 1045 BC. Archaeological finds in southwestern Beijing where Ji was believed to be located date to the Spring and Autumn period. The city of Ji served as the capital of the ancient states of Ji and Yan until the unification of China by the Qin dynasty in 221 BC. Thereafter, the city was a prefectural capital for Youzhou through the Han dynasty, Three Kingdoms, Western Jin dynasty, Sixteen Kingdoms, Northern Dynasties, and Sui dynasty. With the creation of a Jizhou (蓟州) during the Tang dynasty in what is now Tianjin Municipality, the city of Ji took on the name Youzhou. Youzhou was one of the Sixteen Prefectures ceded to the Khitans during the Five Dynasties. The city then became the southern capital of the Liao dynasty and then main capital of the Jin dynasty (1115–1234). In the 13th century, Kublai Khan built a new capital city for the Yuan dynasty adjacent to Ji to the north. The old city of Ji became a suburb to Dadu. In the Ming dynasty, the old and new cities were merged by Beijing's Ming-era city wall. 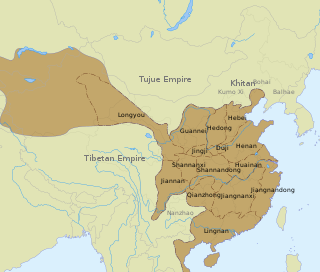 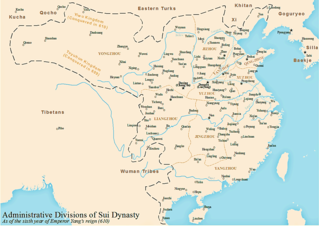 The military history of the Sui and Tang dynasties encompasses the period of Chinese military activity from 581 to 907. Although the Sui dynasty preceded the Tang, it was extremely short lived, ending in 618. The two dynasties share many similar trends and behaviors in terms of military tactics, strategy, and technology. It can therefore be viewed that the Tang continued the Sui tradition, or that the Sui set the precedent for the Tang dynasty.

The Battle of Qingkou was a battle fought in 897 during the period of constant warfare within China that preceded the collapse of the Tang Dynasty. The battle was fought between armies loyal to the warlords Zhu Quanzhong and Yang Xingmi, with Yang’s army gaining victory.