The first ascent of the mountain came in 1929, by Darrington-based mountaineers Harry Bedal and Harold Engles. [4] A fire lookout was built on the southernmost peak by Bedal, Engels, and Frank Benesh, and was seasonally staffed from 1933 until 1942. Supposedly, the top 15 feet (4.6 m) of the southern peak was blasted for the cabin, lowering the mountain's height in the process. [3] It was abandoned and later rebuilt by local mountaineering groups in the 1960s and 1980s. The lookout was added to the National Register of Historic Places in 1987, alongside other structures in the Mount Baker-Snoqualmie National Forest. [5]

The mountain is used for recreational climbing, with a 15-mile-long (24 km) round-trip trail originating on the east side at a trailhead on the Mountain Loop Highway. [6]

Darrington is a town in Snohomish County, Washington, United States. It is located in a mountain valley within the North Cascades that was formed by the Sauk River and North Fork Stillaguamish River. Darrington is connected to nearby areas by State Route 530, which runs along the two rivers towards the city of Arlington, located 30 miles (48 km) to the west, and Rockport. It had a population of 1,347 at the 2010 census. 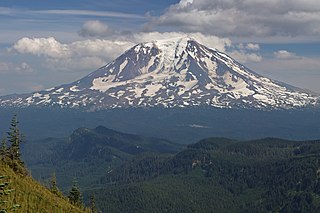 Mount Adams, known by some Native American tribes as Pahto or Klickitat, is a potentially active stratovolcano in the Cascade Range. Although Adams has not erupted in more than 1,000 years, it is not considered extinct. It is the second-highest mountain in the U.S. state of Washington, after Mount Rainier. 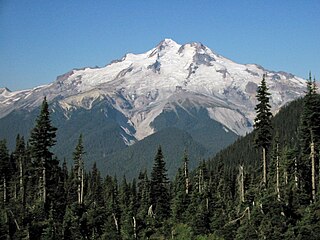 Glacier Peak or Dakobed is the most isolated of the five major stratovolcanoes of the Cascade Volcanic Arc in the U.S state of Washington. Located in the Glacier Peak Wilderness in Mount Baker–Snoqualmie National Forest, the volcano is visible from the west in Seattle, and from the north in the higher areas of eastern suburbs of Vancouver such as Coquitlam, New Westminster and Port Coquitlam. The volcano is the fourth tallest peak in Washington state, and not as much is known about it compared to other volcanoes in the area. Local Native Americans have recognized Glacier Peak and other Washington volcanoes in their histories and stories. When American explorers reached the region, they learned basic information about surrounding landforms, but did not initially understand that Glacier Peak was a volcano. Positioned in Snohomish County, the volcano is only 70 miles (110 km) northeast of Downtown Seattle. From locations in northern Seattle and northward, Glacier Peak is closer than the more famous Mount Rainier, but as Glacier Peak is set farther into the Cascades and almost 4,000 feet (1,200 m) shorter, it is much less noticeable than Mount Rainier. 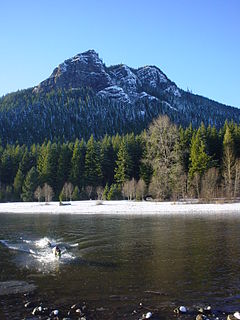 Rattlesnake Ridge is the ridge of Rattlesnake Mountain located south of North Bend, Washington, United States. The western end is near the intersection of State Route 18 and I-90 in Snoqualmie, Washington, and runs southeast about 7 miles (11 km) or 11 miles (18 km) by trail. It is the highest and easternmost of the Issaquah Alps. A maze of abandoned logging roads and constructed trails have been strung together to provide a 10.5-mile (16.9 km) footpath from the Snoqualmie Point trailhead at Exit 27 on I-90 all the way to the Rattlesnake Lake trailhead near Exit 32.

The historical Winchester Lookout, located in the North Cascades in the U.S. state of Washington, provides views of the Northern Picket Range, Mount Baker, Mount Shuksan, Mount Larrabee, and Canadian peaks. The steep snowfields usually require an ice-axe well into July. The Twin Lakes road may not be passable to the trailhead which will add 2 miles (3.2 km) to the hike. Volunteers from the Mount Baker Club maintain the lookout with 2 work parties per year. 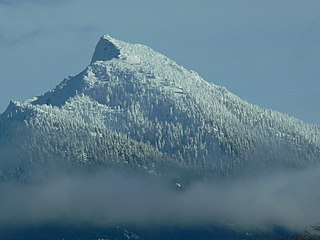 Mount Pilchuck is a mountain located in Snohomish County, Washington. It is 57 miles (92 km) northeast of Seattle. It is part of the Cascade Range.

The Mountain Loop Highway is a highway in the U.S. state of Washington. It traverses the western section of the Cascade Range within Snohomish County. The name suggests it forms a full loop, but it only is a small portion of a loop, which is completed using State Routes 92, 9, and 530. Part of the highway is also a designated and signed Forest Highway, and is known as Forest Route 20. 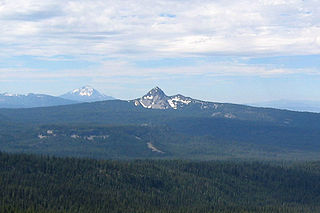 Union Peak is a heavily eroded shield volcano in the Cascade Range of central Oregon, located along the Cascade Crest less than 7 miles (11.3 km) southwest of the rim of Crater Lake. Ice Age glaciers eroded away most of the flanks of the volcano, leaving numerous deep cirques surrounding a central glacial horn. This is the same process that formed the summit horns of Three Fingered Jack, Mount Washington, Howlock Mountain, and Mount Thielsen from other shield volcanoes farther north in the Oregon Cascades.

Desolation Peak is in the North Cascade Mountains of Washington state, about 6.2 miles (10.0 km) south of the Canada–United States border and in the Ross Lake National Recreation Area. It was first climbed in 1926 by Lage Wernstedt, who named it for the destruction caused by a forest fire that swept the slopes bare that same year. At the summit stands a small, wooden, one room fire lookout belonging to the National Park Service. The lookout is 15 miles (24 km) from the nearest road and overlooks miles of forest and numerous other peaks. 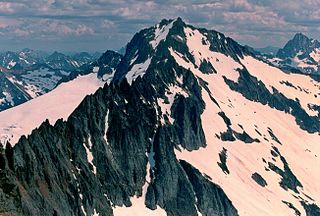 Green Mountain is a peak in the Glacier Peak Wilderness above the Suiattle River in Snohomish County, Washington. It is notable for being the site of a fire lookout that was preserved by an Act of Congress in 2014, the Green Mountain Lookout Heritage Protection Act. 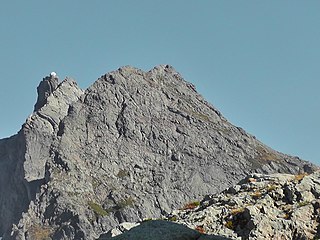 The Three Fingers Lookout is a historic fire observation building on one of the summits of Three Fingers Mountain in Mount Baker-Snoqualmie National Forest, Snohomish County, Washington. Built in 1930 in an extremely challenging location, it is one of the oldest surviving observation posts in the forest. It was listed on the National Register of Historic Places in 1987, and is now maintained by a local climbing group.

Liberty Mountain is a prominent 5680+ feet summit at the western edge of the North Cascades, in Snohomish County of Washington state. It is located 2.3 miles south of Three Fingers in the Boulder River Wilderness on land administered by the Mount Baker-Snoqualmie National Forest. The mountain's name came from old miners in the Silverton area.

Hidden Lake Peaks is series of peaks with a maximum elevation of 7,088 feet that are located in the North Cascades, in Skagit County of Washington state. The peaks extend three miles southwest from the nearest higher peak called The Triad. Situated on the western boundary of North Cascades National Park, Hidden Lake Peaks are positioned west of the crest of the Cascade Range, approximately ten miles east of the town of Marblemount. The popular subsidiary peak, Hidden Lake Lookout (6890 ft), lies a half mile to the southwest of the highest summit. The mountain's name is taken from its proximity to Hidden Lake which lies in a cirque below the east aspect of these two main peaks. Precipitation runoff from Hidden Lake Peaks drains into Cascade River which is a tributary of the Skagit River. 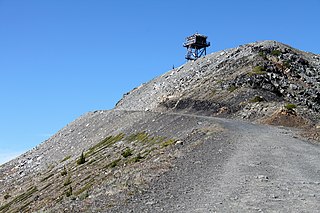 Slate Peak is a 7,440-foot (2,270-metre) mountain summit located on the shared border between Okanogan County and Whatcom County in Washington state. It is part of the Okanogan Range, which is a sub-range of the North Cascades. The mountain is situated 15 miles (24 km) northwest of Mazama, on the boundary line of the Pasayten Wilderness, on land managed by Okanogan National Forest. The peak has the distinction of having the highest road in Washington, as well as the highest fire lookout. Although the narrow one-lane white-knuckle road reaches the summit of the mountain, the Forest Service gated it to vehicles, which necessitates walking the final few hundred yards. Additionally, the Pacific Crest Trail traverses the west slope of the peak, and the West Fork Pasayten Trail traverses the eastern slope. The nearest higher peak is Devils Peak, 2.57 miles (4.14 km) to the north. Precipitation runoff from Slate Peak drains east into Pasayten River, or west into Slate Creek, which is in the Skagit River drainage basin.

The Green Mountain Lookout is a historic fire lookout tower located at the summit of Green Mountain in the Glacier Peak Wilderness and the Mount Baker-Snoqualmie National Forest in Snohomish County, Washington. The single-story wood-frame structure measures 14 by 14 feet and was built according to a standard National Forest Service design in 1933 by the Civilian Conservation Corps. The structure includes an exterior catwalk and a cable anchor system to protect from strong winds.. 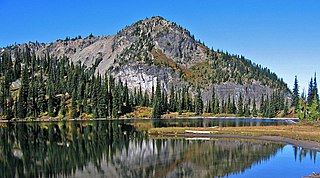 Crystal Peak is a 6,595 feet (2,010 m) summit located in eastern Mount Rainier National Park, in Pierce County of Washington state. Crystal Peak is situated 0.75 mi (1.21 km) northwest of Chinook Peak, and nearly on the crest of the Cascade Range. Crystal Mountain and Crystal Lakes lie immediately to the northeast, and Three Way Peak is 1.09 mi (1.75 km) to the east. Access to the summit is via a hiking trail which branches off from the Crystal Lakes Trail. That trailhead starts along Highway 410, which traverses the western base of the mountain. Precipitation runoff from Crystal Peak drains into tributaries of the White River.