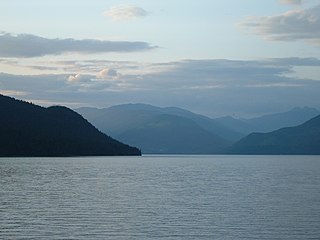 Slocan Lake is a lake in the Slocan Valley of the West Kootenay region of the Southeastern Interior of British Columbia, Canada. it is drained by the Slocan River, which flows south from the lake's foot at Slocan City through the Slocan Valley to South Slocan, British Columbia, where that river meets the Kootenay River a few miles above its confluence with the Columbia. It is fed by Bonanza Creek, which comes down the pass from Summit Lake, beyond which is the town of Nakusp on Upper Arrow Lake.

Gold Trails and Ghost Towns is a historical documentary show first produced for Canadian syndication, created and produced by Kelowna television station CHBC-TV and hosted by Mike Roberts with historian storyteller Bill Barlee. The show was filmed in a studio which resembled an old trapper's cabin. Mike and Bill discussed history of the old West by prospectors around 1900 in British Columbia. 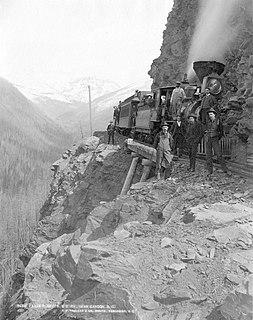 The Kaslo and Slocan Railway was a 3 ft narrow-gauge railway between Kaslo, Slocan, and the mining community of Sandon in the Kootenay region of British Columbia between 1895 and 1955 totalling about 53 km (33 mi) of track. It was operated originally by the Great Northern Railway and later by the Canadian Pacific Railway.

The Nakusp and Slocan Railway (N&S) is a historic Canadian railway that operated in southeastern British Columbia.

Sandon is a ghost town in the Kootenay region of British Columbia, Canada. Once the unofficial capital of the mining region known as the "Silvery Slocan", only some of it remains standing.

The Village of Slocan, historically also known as Slocan City, from Ktunaxa: sⱡuqan, IPA: [sɬuqan]). is a village in the Slocan Valley of the West Kootenay region of the southeastern Interior of British Columbia, Canada. It is located at the southern end of Slocan Lake, to the south of New Denver, which sits mid-way up the lake's eastern shore.

Gold Bridge is an unincorporated community in the Bridge River Country of British Columbia, Canada. Although numbering only around 40 inhabitants, Gold Bridge is the service and supply centre for the upper basin of the Bridge River Valley, which includes recreation-residential areas at the Gun Lakes, Tyaughton Lake, Marshall Creek, and Bralorne; and the nearby ghost towns of Brexton and Pioneer Mine. 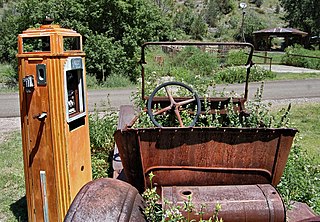 Mogollon, also called the Mogollon Historic District, is a former mining town located in the Mogollon Mountains in Catron County, New Mexico, in the United States. Located east of Glenwood and Alma, it was founded in the 1880s at the bottom of Silver Creek Canyon to support the gold and silver mines in the surrounding mountains. The "Little Fannie" mine became the most important employer for the town. During the 1890s Mogollon had a transient population of between 3,000 and 6,000 miners. Because of its isolation it had a reputation as one of the wildest mining towns in the West. Today Mogollon is listed as Fannie Hill Mill and Company Town Historic District on the National Register of Historic Places.

Quesnel Forks, historically Quesnelle Forks, also simply known as "The Forks" or grandly known as "Quesnel City" is a ghost town in the Cariboo region of British Columbia, Canada. It is located the junction of the Quesnel and Cariboo Rivers and is 60 km southeast of Quesnel and only 11 km northwest of Likely.

Ainsworth or Ainsworth Hot Springs is a historic village on Kootenay Lake in British Columbia, Canada and has a population of 20.

The Slocan Valley is a valley in the West Kootenay region of British Columbia, Canada.

Tarryall is a ghost town in northwest Park County, Colorado, United States. The town was located on upper Tarryall Creek northwest of Como, Colorado. It was once the county seat of Park County, but is now completely deserted.

Erie is a ghost town located in the West Kootenay region of British Columbia. Erie is located eight miles west of Salmo, southwest of Nelson. The town of Erie was originally known as North Fork. Erie was founded in the 1860s when prospectors discovered gold in a canyon on a stream called North Fork Creek. North Fork Creek is now called Erie Creek. A mineshaft was bored up on the mountain at the Arlington claim and removed ore for several years. Cabins and bunkhouses were built about 1897 on the mountain. The Second Relief claim was formed later and worked too. One miner was named Gillam [who incidentally was the grandfather to singer Michelle Phillips.]

Nashton is a ghost town located in the West Kootenay region of British Columbia. Nashton is located at the confluence of Keen Creek and the Kaslo River. The town was founded in 1896 and originally called South Fork. The Kaslo and Slocan Railway passed through the town on its way to Sandon. South Fork became the shipping center for mines such as Alice-Utica, Cork-Province, and Montezuma. South Fork's name was changed to Zwicky. In 1898 the town contained several stores, hotel, and some houses. In 1915 a post office was built and Zwicky was renamed Nashton. The town lasted through several decades. Stagecoaches such as Scott, Baker, and Company passed through Nashton. Today Nashton is deserted.

Pilot Bay is a ghost town located in the West Kootenay region of British Columbia. The town is located west of Crawford Bay on the east side of Kootenay Lake, opposite the entrance to West Arm Provincial Park. In the early 1890s, the Hendryx interests built a smelter on the east side of Kootenay Lake to treat the ores from their Blue Bell lead-silver mine at Riondel. By 1895 the Pilot Bay Smelter was in operation with 200 men employed. A town emerged around the smelter called Pilot Bay. Pilot Bay had a population of 1,000 and had 4 hotels, 3 stores and some other businesses. Mines which shipped their ore to the smelter include the Blue Bell, Ainsworth Mines, and Slocan Mines. In 1896 the Hall Mines Smelter in Nelson had started and become too much competition for Pilot Bay. This resulted in the closure of Pilot Bay Smelter in 1896. The Pilot Bay Smelter reopened in 1905 but was eventually closed permanently. Today all that is left is the ruins of the smelter and remnants of the town.

Zincton is a ghost town located in the West Kootenay region of British Columbia. The town was located near Sandon, East of Slocan Lake. The town of Zincton was built to support the mining efforts in the area. Zincton was founded around 1892. The ore predominantly found in the area was zinc. Zinc was an unwanted metal at that time. Much of the ore was shipped to the Pilot Bay smelter. Zincton was destroyed by a forest fire in 1910. In 1927 the Victoria Syndicate had acquired claims in the area and rebuilt the town. The Kaslo and Slocan Railway line passed through Zincton. Zincton was the largest producer of Zinc in the Slocan area. The ore body was eventually depleted, and today Zincton is deserted.

Lemon Creek is an unincorporated community in the Slocan Valley region of southeastern British Columbia, Canada. Its name is derived from that of the creek of the same name, which was named for Robert Lemon, a prominent merchant in pre-Great War Nelson. It is a few miles south of Slocan City which is at the south end of Slocan Lake.

The Cripple Creek Gold Rush was a period of gold production in the Cripple Creek area from the late 1800s until the early 1900s. Mining exchanges were in Cripple Creek, Colorado Springs, Pueblo and Victor. Smelting was in Gillette, Florence, and (Old) Colorado City. Mining communities sprang up quickly, but most lasted only as long as gold continued to be produced. Settlements included: