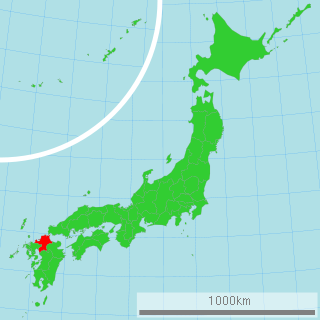 Fukuoka Prefecture is a prefecture of Japan on Kyūshū Island. The capital is the city of Fukuoka. As of 2018, it is the ninth most populated prefecture in Japan.

Dazaifu is a city located in Fukuoka Prefecture, Japan, part of the greater Fukuoka metropolitan area. Nearby cities include Ōnojō and Chikushino. Although mostly mountainous, it does have arable land used for paddy fields and market gardening. 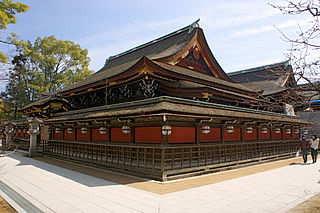 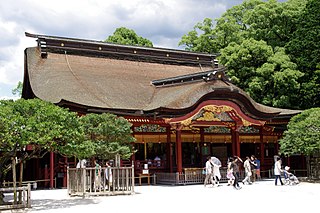 In mythology, folklore and the Shinto religion of Japan, Tenjin (天神) is the patron kami (deity) of academics, scholarship and learning, the intelligentsia. 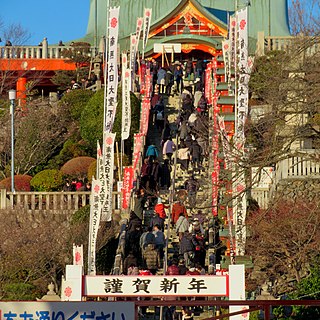 Hatsumōde is the first Shinto shrine visit of the Japanese New Year. Some people visit a Buddhist temple instead. Many visit on the first, second, or third day of the year as most are off work on those days. Generally, wishes for the new year are made, new omamori are bought, and the old ones are returned to the shrine so they can be burned. There are often long lines at major shrines throughout Japan.

Kanō Tenman-gū (加納天満宮) is a Shinto shrine located in the city of Gifu, Gifu Prefecture, Japan. It was built as the shrine to protect Izumii Castle. As a Tenman-gū, it is dedicated to Tenjin, the deified form of Sugawara no Michizane. Additionally, Matsudaira Mitsushige, who first created Gifu Umbrellas, is also canonized on the shrine grounds. The shrine's festival is held on the third Saturday and Sunday of October each year. 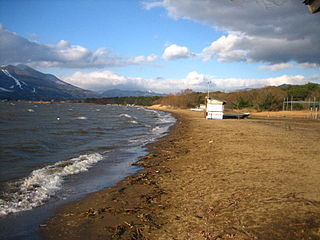 Nagara Tenjin Shrine is a Shinto shrine located in the Nagara area of Gifu, Gifu Prefecture, Japan. It is a Tenman-gū dedicated to the worship of Sugawara no Michizane. 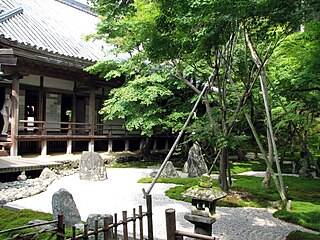 Kōmyōzen-ji (光明禅寺) is a Zen temple in Dazaifu, Fukuoka Prefecture, Japan. It was founded by Tetsugyū Enshin of the Tōfuku-ji Rinzai school in 1273. Kōmyōzen-ji is celebrated for its karesansui garden, the only example in Kyushu.

Mizuta Tenmangū (水田天満宮) is a Shinto shrine in Chikugo, Fukuoka Prefecture, Japan. It was founded in 1226 in honour of Sugawara no Michizane. The honden was rebuilt in 1672 and designated a prefectural cultural property in 1961.

Tetsugyū Enshin (鉄牛円心) (1254–1326) was a Buddhist monk of the Tōfuku-ji Rinzai school and follower of Enni. He is celebrated as the founder of Kōmyōzen-ji (光明禅寺) in Chikuzen Province, modern Fukuoka Prefecture.

Aisome-gawa, also known as Some-gawa (染川), is a Japanese Noh play. The libretto's author is unknown, but it was being performed as early as 1514. It is in present repertoires of two of the major Noh schools, Kanze and Konparu. The story concerns a former lover of the high priest of the Dazaifu Tenman-gū who travels to Kyūshū to see him, but is tricked by his jealous wife into committing suicide. The priest prays at his shrine, and the deity, Tenman-Tenjin, manifests and resurrects the lover. The play was modified early on because of disruption at performances. It influenced several later works of literature.