The Three Handed Mother of God Church [1] (Estonian : Tallinna Kolmekäelise Jumalaema kirik) is the name given to a religious building that is affiliated to the Ukrainian Greek Catholic Church (one of the Eastern Catholic Church in full communion with the Pope in Rome) that is located in the 22 street Laboratooriumi in Tallinn, Estonia. The Evangelical Lutheran Church of Estonia managed the building in the period between 1994 and 1997.

In late 1997, the church was destroyed by fire, with arson that ended a criminal trial. On 14 October 2000, the church was restored and consecrated in honor of the Virgin Mary. The ceremony was celebrated by Archbishop Ljubomõr Guzar of the Ukrainian Greek Catholic Church, the church has paintings by the artist Lviv Petro Gumenjuk, and the interior was designed and built by one of his assistants Anatoly Ljutjuk. All Masses are celebrated in Ukrainian language.

The Eastern Orthodox Church is a communion comprising the fourteen or sixteen separate autocephalous (self-governing) hierarchical churches that recognize each other as "canonical" Eastern Orthodox Christian churches. Each constituent church is self-governing; its highest-ranking bishop reports to no higher earthly authority. Each regional church is composed of constituent eparchies ruled by bishops. Some autocephalous churches have given an eparchy or group of eparchies varying degrees of autonomy. Such autonomous churches maintain varying levels of dependence on their mother church, usually defined in a Tomos or other document of autonomy. In many cases, autonomous churches are almost completely self-governing, with the mother church retaining only the right to appoint the highest-ranking bishop of the autonomous church.

The Ruthenian Greek Catholic Church, also known in the United States as the Ruthenian Byzantine Catholic Church, is an Eastern Catholic church that uses the Byzantine Rite for its liturgies, laws, and cultural identity. It is one of the 23 Eastern Catholic churches that are in full communion with the Holy See. There are two main communities within the church: American and European. In the United States, the Byzantine Catholic Metropolitan Church of Pittsburgh is self-governing. In Europe, Ruthenian Catholics are immediately subject to the Holy See. The European branch has an eparchy in Ukraine and another in the Czech Republic.

The Elevation of the Holy Cross is one of the Great Feasts of the Orthodox Church, celebrated on September 14. It is one of the two feast days which is held as a strict fast. The other is the commemoration of the Beheading of John the Forerunner on August 29.

Romny is a city in northern Ukrainian Sumy Oblast. It is located on the Romen River. Romny serves as the administrative center of Romny Raion. It is administratively incorporated as a city of oblast significance and does not belong to the raion. The villages of Lutschky, Kolisnykove and Hrabyne belong to the Romny Municipality. Population: 38,947

The Ukrainian Catholic Eparchy of Saint Nicholas of Chicago is a Ukrainian Greek Catholic Church ecclesiastical territory diocese of the Catholic Church which has jurisdiction over the entire western United States, all of the Midwest, Alaska, and Hawaii. However, as their parishes originated in areas where Ukrainian Catholics had settled or moved over time, their churches have a presence in 15 states. As of 2020, the St. Nicholas Eparchy has 43 churches and missions in the western USA.

Santa Sofia a Via Boccea is a church in Rome, Italy. It is dedicated to Holy Wisdom, one of the seven gifts of the Holy Spirit. It served as the mother church of the Ukrainian Greek Catholic Church while St. George's Cathedral in Lviv was controlled by the Russian Orthodox Church.

The Ukrainian (Greek) Catholic Eparchy of Wrocław–Koszalin is a suffragan eparchy in the ecclesiastical province of the Metropolitan Archeparchy of Przemyśl–Warsawa, which covers some part of Poland for the Ukrainian Greek Catholic Church parallel to the Latin hierarchy. It depends from the Roman Congregation for the Oriental Churches.

Dzhublyk, also transliterated as Jublyk, is a Greek-Catholic Marian sanctuary near the villages Nyzhnye Bolotnye and Vilkhivka in western Ukraine. The sanctuary is known for the Marian apparition of Our Lady and Holy Family. Dzhublyk is situated in the Irshava raion of Zakarpattya region, also known as Transcarpathia. In the years following the revelation of August 2002, an ever increasing number of pilgrims arrive to Dzhublyk.

Ukrainian Bible Society, is a religious non-profit organization, established by representatives of different Christian denominations in Ukraine, who recognize the Bible as the Word of God. It is a member of the international association of United Bible Societies, which currently involves 145 national institutions of similar kind. 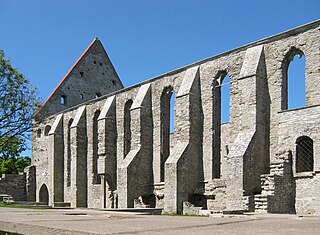 Pirita Convent was a monastery for both monks and nuns dedicated to St. Brigitta, located in the district of Pirita in Tallinn, Estonia. It functioned from 1407 to 1575. It was the largest convent in Livonia, and one of the largest in Northern Europe.

The Dominican church and monastery in Lviv, Ukraine is located in the city's Old Town, east of the market square. It was originally built as the Roman Catholic church of Corpus Christi, and today serves as the Greek Catholic church of the Holy Eucharist. 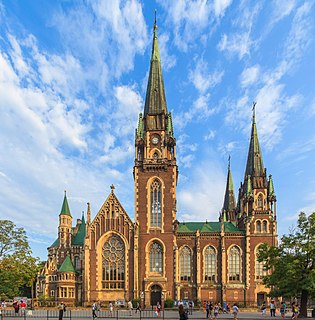 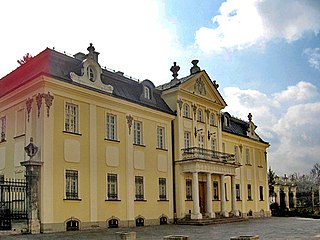 The Metropolitan Palace also known as Greek Catholic Archbishops Palace opposite St. George's Cathedral, Lviv has been the principal residence of the Metropolitans of the Ukrainian Greek-Catholic Church since the 16th century. The current building was erected in 1761-62 to Clement Fessinger's designs and displays traits of the transition from Baroque to Neo-Classical. The façade bears a plaque in memory of Archbishop Andrey Sheptytsky. On the west side of the palace extends an old flower garden. Pope John Paul II stayed at the palace during his 2001 visit to Ukraine.

Sviatoslav Shevchuk has been the major archbishop of the Ukrainian Greek Catholic Church (UGCC) since 25 March 2011. 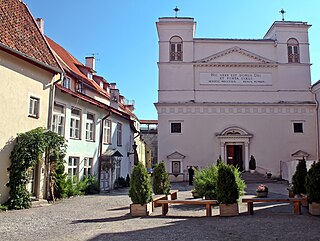 The Apostolic Administration of Estonia is a Latin, territorial Catholic circonscription that covers all of the Baltic state of Estonia.