The Three Kids Mine Remediation and Reclamation Act (H.R. 697; Pub.L.   113–135) is a U.S. public law that authorizes the sale of approximately 950 acres of federal land to the city of Henderson, Nevada. [1] The land used to be a mine and now needs significant environmental remediation and reclamation. [2] The bill was introduced into the United States House of Representatives during the 113th United States Congress; a previous version (H.R. 2512) passed the House during the 112th United States Congress, but never received a vote in the Senate. [3] Cleanup efforts of the land are expected to cost between $300 million and $1.2 billion, depending on various estimates and cleanup targets. [3]

Henderson is a city in Clark County, Nevada, United States, about 16 miles (26 km) southeast of Las Vegas. It is the second-largest city in Nevada, after Las Vegas, with an estimated population of 310,390 in 2018. The city is part of the Las Vegas metropolitan area, which spans the entire Las Vegas Valley. Henderson occupies the southeastern end of the valley, at an elevation of 1,864 feet (568 m).

This summary is based largely on the summary provided by the Congressional Research Service, a public domain source. [1]

Environmental remediation deals with the removal of pollution or contaminants from environmental media such as soil, groundwater, sediment, or surface water. This would mean that once requested by the government or a land remediation authority, immediate action should be taken as this can impact negatively on human health and the environment.

The bill would adjust the boundary of the River Mountains Area of Critical Environmental Concern. It also releases the United States, upon making the conveyance, from any and all liabilities or claims of any kind or nature arising from the presence, release, or threat of release of any hazardous substance or mining related materials at the Three Kids Mine Project Site. [1]

Finally, it would make the provisions of the Southern Nevada Public Land Management Act of 1998 (Pub.L.   105–273) inapplicable to land conveyed under this Act. [1]

H.R. 697 would require the Bureau of Land Management (BLM) to sell 950 acres of federal land, some of which are contaminated by hazardous waste, to the city of Henderson, Nevada. [2] Under the bill, the agency would determine the sale price by estimating the fair market value of the land and reducing that amount by the estimated cost of any necessary environmental remediation and mining reclamation activities at the site. [2] The city of Henderson would be responsible for those costs following the sale. Based on information from the BLM, the Congressional Budget Office (CBO) estimates that implementing the legislation would have no significant impact on the federal budget. Enacting the bill would not affect direct spending or revenues; therefore, pay-as-you-go procedures do not apply. [2]

Roughly 15 percent of the lands that would be sold under the bill are contaminated and will require mine reclamation and environmental remediation. [2] Based on information provided by the BLM and the city of Henderson, the CBO estimates that the agency is unlikely to receive any financial compensation for any of the land because remediation and reclamation costs would exceed the land’s fair market value. [2] Because the CBO expects that the affected lands would not generate any receipts under current law over the next 10 years, we estimate that conveying the lands under the bill would have no significant impact on the federal budget. [2]

The City of Henderson, NV paid a lobbyist organization $10,000 in 2013, part of which went to fund lobbying activities in favor of the Three Kids Mine Remediation and Reclamation Act. [8]

In 2013, the Las Vegas Sun listed off the Three Kids Mine Remediation and Reclamation Act as item number three in its list of "Top 10 Nevada land swaps stalled in Congress," noting that 87 percent of Nevada's land is federally owned. [9] 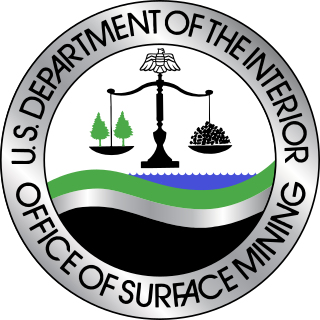 The Office of Surface Mining Reclamation and Enforcement (OSMRE) is a branch of the United States Department of the Interior. It is the federal agency entrusted with the implementation and enforcement of the Surface Mining Control and Reclamation Act of 1977 (SMCRA), which attached a per-ton fee to all extracted coal in order to fund an interest-accruing trust to be used for reclamation of abandoned mine lands, as well as established a set environmental standards that mines must follow while operating, and achieve when reclaiming mined land, in order to minimize environmental impact. OSMRE has about 500 employees, who work in either the national office in Washington, DC, or of the many regional and field offices(OSM's Three Regions).

The San Antonio Missions National Historical Park Boundary Expansion Act of 2013 is a bill that was introduced into the United States House of Representatives during the 113th United States Congress. It passed the House on June 3, 2013. The bill authorizes the expansion of the size of the San Antonio Missions National Historical Park in Texas to include approximately 137 additional acres. It also describes the conditions and restrictions on this project.

The South Utah Valley Electric Conveyance Act is a United States Public Law that was introduced into the United States House of Representatives of the 113th United States Congress. The law transfers ownership of certain electric system equipment, transmission lines, and land from the federal government to the local organizations in Utah that have been maintaining it for decades. This transfer is the result of mistakes made in the sale of that land from 1986. The law passed in the House on June 11, 2013 and passed in the United States Senate on July 10, 2013.

The Southeast Arizona Land Exchange and Conservation Act of 2013 is a bill that was introduced into the United States House of Representatives during the 113th United States Congress. H.R. 687 would authorize a land exchange in Arizona between the federal government and a mining company. Under H.R. 687, the United States Forest Service would convey about 2,400 acres of land in southeast Arizona to Resolution Copper Mining LLC in exchange for about 5,400 acres of company-owned land. Of the company land, about 1,200 acres would become part of the National Forest System, and about 4,200 acres would be administered as conservation areas by the Bureau of Land Management. If the property sought by Resolution Copper is appraised at more than the appraised value of the property that the company offers for exchange, the company could donate additional land or make a cash payment to the United States to make the final exchange of equal value. If the company’s property is appraised for more than the federal acreage, the difference in the value would be considered a donation to the federal government. According to the Committee Report on the bill, the "mine could provide up to one-quarter of the nation's estimated annual copper needs" and the mining company estimates that the "total economic impact of the mine will exceed $60 billion and support 3,700 jobs annually." Opponents of the bill argue that the swap has not been thoroughly studied, that the mining company has failed to indicate where it will get much needed water for the mine, and that Native American tribes have not been properly consulted.

The Central Oregon Jobs and Water Security Act is a land-use and water bill related to the Crooked River in Oregon and the Bowman Dam. H.R. 2640 would modify features of the Crooked River Project located in central Oregon, north of the city of Prineville, and prioritize how water from the project would be allocated for different uses. It was introduced into the United States House of Representatives during the 113th United States Congress.

The Lake Hill Administrative Site Affordable Housing Act is a U.S. public law that requires the secretary of agriculture to sell 40 acres of Forest Service land near Frisco, Colorado. Summit County, Colorado, would use the land to build affordable housing. The law was introduced into the United States House of Representatives during the 113th United States Congress.

The Natural Gas Pipeline Permitting Reform Act is a bill that would place a 12-month deadline on the Federal Energy Regulatory Commission to approve or reject any proposal for a natural gas pipeline. It was first introduced into the United States House of Representatives during the 113th United States Congress, and passed the House. It was again introduced during the 114th United States CongressH.R. 161 in January 2015 by Rep. Mike Pompeo, passed the House on January 21.

The Good Samaritan Search and Recovery Act of 2013 is a bill that would make it easier for qualified volunteer groups to conduct searches for missing persons on federal land. The federal government would be required to issue a permit within 48 hours. Volunteer groups would also be excused from a requirement that they buy insurance if they are willing to waive all federal liability.

The Public Access and Lands Improvement Act is an omnibus bill that combines ten smaller, previously introduced bills all related to land and land use. Several of the bills transfer federal lands to state or local governments. The bill also addresses cattle grazing.

The Preventing Government Waste and Protecting Coal Mining Jobs in America is a bill that would amend the Surface Mining Control and Reclamation Act of 1977 to require state programs for regulation of surface coal mining to incorporate the necessary rule concerning excess spoil, coal mine waste, and buffers for perennial and intermittent streams published by the Office of Surface Mining Reclamation and Enforcement on December 12, 2008.

The Ensuring Public Involvement in the Creation of National Monuments Act would amend the Antiquities Act of 1906 to subject national monument declarations by the President to the National Environmental Policy Act of 1969 (NEPA). At present, the President of the United States can unilaterally declare something a national monument, whereas the United States Congress is required to follow a more rigorous series of procedures to gather input from the public. When something is called a "National Monument," that means no action from Congress was required, while something designated a "National Park" did require Congressional action. In addition to limiting the number of national monument declarations the president could make, the bill would forbid the government from declaring land belonging to a private owner as a national monument without the private owner's consent.

Pub.L. 113–127 is a United States public law that would take specified federal land in El Dorado County, California, into trust for the Shingle Springs Band of Miwok Indians. The United States Secretary of the Interior would be responsible for carrying this out.

The bill "To amend the Wild and Scenic Rivers Act to authorize the Secretary of the Interior to maintain or replace certain facilities and structures for commercial recreation services at Smith Gulch in Idaho, and for other purposes" is a bill that would require the United States Secretary of Agriculture to permit private entities to repair or replace certain commercial facilities on United States Forest Service land in Idaho.

The Northern Nevada Land Conservation and Economic Development Act is a bill that would require the Bureau of Land Management (BLM) to convey certain federal lands in Nevada to other government entities. The bill was a package of several different smaller bills related to land in Nevada.