A Comedy Film is a genre of film in which the main emphasis is on humour. These films are designed to make the audience laugh through amusement and most often work by exaggerating characteristics for humorous effect. Films in this style traditionally have a happy ending. One of the oldest genres in film, some of the very first silent movies were comedies, as slapstick comedy often relies on visual depictions, without requiring sound. When sound films became more prevalent during the 1920s, comedy films took another swing, as laughter could result from burlesque situations but also dialogue.

Pedro Lazaga Sabater was a Spanish film director and screenwriter. He directed 94 films between 1948 and 1979. 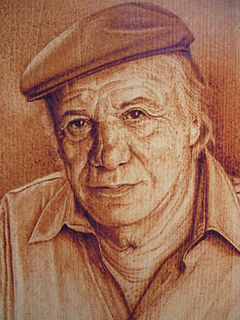 Francisco Rabal Valera, better known as Paco Rabal, was a Spanish actor, director, and screenwriter born in Águilas, a town in the south-western part of the province of Murcia, Spain. Throughout his career, Rabal appeared in around 200 films working with directors including Francesc Rovira-Beleta, Luis Buñuel, José Luis Sáenz de Heredia, Carlos Saura, Pedro Almodóvar, William Friedkin, Michelangelo Antonioni, Claude Chabrol, Luchino Visconti o Gillo Pontecorvo. Paco Rabal was recognised both in his native Spain and internationally, winning the Award for Best Actor at the Cannes Film Festival for Los Santos Inocentes and a Goya Award for Best Actor for playing Francisco de Goya in Carlos Saura's Goya en Burdeos. One of Spain's most loved actors, Rabal also was known for his commitment to human rights and other social causes.

Jesús Puente Alzaga was a Spanish actor. He appeared in more than one hundred films from 1957 to 2000.

Rocío Espinosa López-Cepero, known professionally as Laurita Valenzuela or Laura Valenzuela, is a Spanish television presenter and actress of the 1950s and 1960s. Before becoming known in Europe for hosting 1969 edition of the Eurovision Song Contest, she was a model and appeared in many publications around the world. She was one of the first faces that Spain saw on television when Televisión Española (TVE) was launched in 1956.

Andalucía was a cycling team based in Spain; the team was managed by Antonio Cabello, and assisted by Juan Martinez as a directeur sportif. The team currently does not hold a requisite licence to compete in professional cycle racing, after the team were rejected a Professional Continental licence – where the team had competed at since 2006 – in December 2012.

Amor a la española is a 1967 Spanish romantic comedy musical directed by Fernando Merino and script written by Alfonso Paso. It is based on the story by José Luis Dibildos.

A Cuban in Spain is a 1951 musical comedy film directed by Luis Bayón Herrera. It was a co-production between Argentina, Cuba and Spain. The film's sets were designed by Francisco Prósper and Pierre Schild.

La Colmena is a 1982 Spanish film directed by Mario Camus. Based on the novel The Hive by Camilo José Cela, it depicts the aftermath of the Spanish Civil War and its impact on several characters. Cela has a small role as Matías.

Marisol is a Mexican telenovela produced by Juan Osorio for Televisa in 1996. Telenovela is a remake of the 1977 Mexiacan telenovela Marcha nupcial. Famous and beloved Enrique Álvarez Félix died after he finished his work in Marisol.

Siempre te amaré is a Mexican telenovela produced by Juan Osorio for Televisa in 2000. It was adapted from the 1975 telenovela Lo imperdonable by Consuelo Garrido and Georgina Tinoco.

Zorrita Martinez is a 1975 Spanish comedy drama film directed by Vicente Escrivá and starring José Luis López Vázquez, Nadiuska and Manuel Zarzo. A Venazeulan performer living in Spain, gets married so she can get a permit to stay in the country. 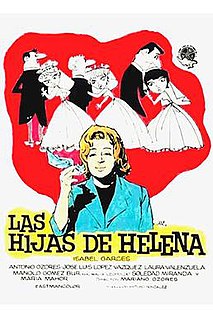 The Daughters of Helena is a 1963 Spanish comedy film directed by Mariano Ozores and starring Isabel Garcés, Antonio Ozores and Laura Valenzuela.

Blood in the Bullring is a 1969 Spanish drama film directed by Rafael Gil and starring Alberto Closas, Ángel Teruel and Francisco Rabal.

The Guerrilla is a 1973 French-Spanish film directed by Rafael Gil and starring Francisco Rabal, Jacques Destoop and Julia Saly.

You and Me Are Three is a 1962 Argentine-Spanish comedy film directed by Rafael Gil.It is about a woman who falls in love by correspondence with a man who turns out to have a conjoined twin. It is based on a play by Enrique Jardiel Poncela. 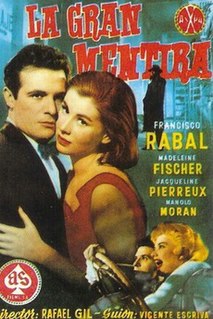 The Big Lie is a 1956 Spanish film directed by Rafael Gil and starring Francisco Rabal, Madeleine Fischer and Jacqueline Pierreux.

Three Sparrows and a Bit is a 1964 Spanish film directed by Antonio del Amo.