A city ordinance declared that no building within 250 feet (76 m) of the nearby Benjamin Franklin Parkway may rise taller than 250 feet (76 m). The Bell Atlantic Tower stands at the southernmost edge of this zone. A landscaped plaza, constructed of the same red granite as the building itself, occupies the rest of the plot, fulfilling a city requirement that 1% of the total budget for new building construction must go toward a work of public art.

A banquet hall, known as Top of the Tower, occupies the top floor of the building and is available for public rentals.

It was the headquarters for Philadelphia-based Baby Bell Bell Atlantic until 1996, when Bell Atlantic acquired New York City-based NYNEX and moved its headquarters to New York. In 2000, Bell Atlantic and GTE merged to become Verizon and the "Bell Atlantic" name became obsolete. However, the building's managers kept the original name, mainly because of the difficulties in getting all necessary parties to agree to change it.

The building had been offered for sale in the past, [1] and on August 5, 2010, it was sold to Brandywine Realty Trust. [2] The company has since renamed the tower Three Logan Square, to better identify its location near two other Brandywine-owned buildings, One and Two Logan Square. [3] 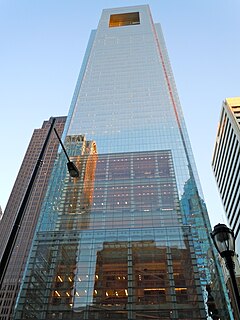 Comcast Center, also known as the Comcast Tower, is a skyscraper in Center City, Philadelphia, Pennsylvania, United States. The 58-story, 297-meter (974 ft) tower is the second-tallest building in Philadelphia and the state of Pennsylvania, as well as the twenty-third tallest building in the United States. Originally called One Pennsylvania Plaza when the building was first announced in 2001, the Comcast Center went through two redesigns before construction began in 2005. Comcast Center was designed by Robert A.M. Stern Architects for Liberty Property Trust. 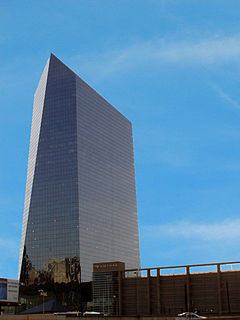 The Cira Centre is a 29-story, 437-foot (133 m) office high-rise in the University City section of Philadelphia, directly connected to Amtrak's 30th Street Station. Developed by Brandywine Realty Trust and designed by César Pelli, it was built in 2004-05 on a platform over rail tracks. 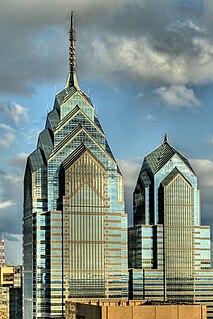 Commerce Square is a Class-A, high-rise office building complex in Center City Philadelphia, Pennsylvania, United States. Commerce Square consists of One and Two Commerce Square, two identical 41-story office towers 565 feet (172 m) high that surround a paved courtyard of 30,000 square feet (2,800 m2). Architecturally, the granite-clad towers feature setbacks on the north and south sides of the building and are topped with a pair of stone diamonds with cutout squares in the center. The towers were built as part an office-building boom Philadelphia was experiencing on West Market Street in the late 1980s. Designed by IM Pei & Partners, the towers were developed in a joint venture between Maguire Thomas Partners and IBM. IBM also leased more than half of One Commerce Square for the company's Mid-Atlantic headquarters. Construction of the first phase, which included One Commerce Square, the plaza, and retail space, began in 1985 and was completed in 1987. The project's second phase, Two Commerce Square, did not begin until a lead tenant was secured for the building in 1990. Consolidated Rail Corporation (Conrail) agreed to be Two Commerce Square's lead tenant and make the skyscraper its corporate headquarters after a two-year search for office space in the region. Two Commerce Square ended the skyscraper construction boom of the 1980s when it was completed in 1992. No other office skyscraper was built in Philadelphia until Brandywine Realty Trust built the Cira Centre in 2005. 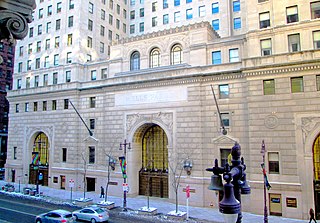 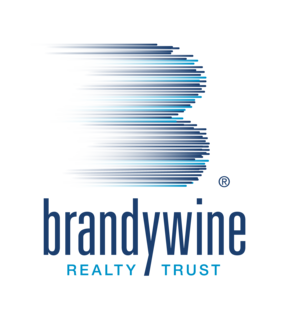 Brandywine Realty Trust is a real estate investment trust that invests in office buildings in Philadelphia, Washington, D.C., and Austin. 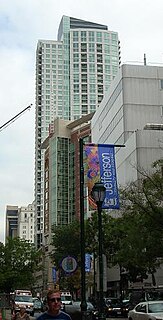 Liberty Property Trust was a real estate investment trust that invested in office buildings and industrial properties. As of December 31, 2017, the company owned interests in 461 industrial and 48 office properties comprising 86.0 million square feet. In 2020, the company was acquired by Prologis. 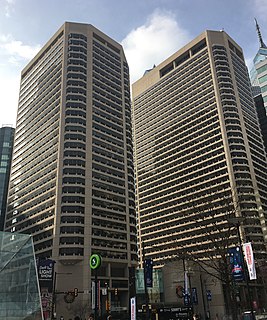 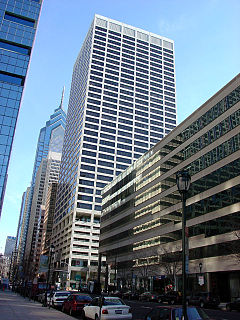 1818 Market Street is a 40-story skyscraper in downtown Philadelphia, Pennsylvania, United States. The building was designed by the firm Ewing Cole Cherry Brott. Construction began on the property in 1972. The developer, Walters Associates, which also developed the Holiday Inn at 1800 Market, planned a construction budget of $50 million for the property. It was the tallest building erected in Philadelphia between the completion of City Hall in 1901 and the completion of One Liberty Place in 1987, during the period of the "gentlemen's agreement", the observation of an unofficial height restriction of the top of the hat of the statue of William Penn atop City Hall that stood for 86 years. The building is the eleventh-tallest in Philadelphia.

The Residences at The Ritz-Carlton is a luxury residential skyscraper in Center City in Philadelphia, Pennsylvania. At 518 feet (158 m), the 48-story skyscraper is the twelfth-tallest building in Philadelphia, and the tallest residential tower in the city. The building was erected on the former site of One Meridian Plaza which was seriously damaged by a deadly fire in 1991. One Meridian Plaza was demolished in 1999 and the property was sold by E/R Partners to the Arden Group the next year. Development of the site by the Arden Group, which owns the adjacent Ritz-Carlton Philadelphia, was delayed for years as a result of a feud with rival developer Mariner Commercial Properties. Mariner owned the property 1441 Chestnut Street, which sits south of the Residences at The Ritz-Carlton site and intends to build its own residential tower. The feud began after Arden Group's lead partner Craig Spencer blocked approval of 1441 Chestnut Street because he felt the tower's design would be detrimental to the planned Residences at The Ritz-Carlton tower. This led to several years of dispute between the developers trying to block construction of each other's towers.

2000 Market Street is a high-rise office building located in the Market West region of Philadelphia. The building stands at a height of 435 feet with 29 floors, and was completed in 1973. It is currently tied with Two Logan Square as the 17th-tallest building in Philadelphia. The architect of the building was Pitcairn Properties, Inc.

One Logan Square is a high-rise building located in the Logan Square neighborhood of Philadelphia, Pennsylvania. The building stands at 400 ft with 31 floors, and was completed in 1983. The architectural firm responsible for the building's design is Kohn Pedersen Fox Associates PC. The building and accompanying Four Seasons Hotel were developed by a joint venture of INA and Urban Investment and Development Co. for $120 million. As the zoning laws at the time prohibited buildings taller than 80 feet facing Logan Square, building the low-rise hotel on the square allowed construction of the office building. Law firm Morgan, Lewis & Bockius was one of the anchor tenant at the property at construction and received an equity stake as part of its lease commitment.

The Murano is a residential skyscraper in Center City, Philadelphia. Part of a condominium boom occurring in the city, the Murano was announced in 2005 and was developed jointly by Thomas Properties Group and P&A Associates. The building, named after Murano, Italy, was completed in 2008 at a cost of US$165 million. The site, previously occupied by a parking lot, was the location of the Erlanger Theatre from 1927 to 1978.

The American Commerce Center was a proposed supertall skyscraper approved for construction in Philadelphia, Pennsylvania but cancelled due to the 2008 recession. The Comcast Innovation and Technology Center now stands on the site.

Cira Centre South is a complex of two skyscrapers in the University City district of Philadelphia, Pennsylvania, directly across the Schuylkill River from Center City Philadelphia. The complex is between Walnut Street and Chestnut Street south of 30th Street Station and the Old Post Office Building.

The Comcast Technology Center is a supertall skyscraper in Center City, Philadelphia. The 60-floor building, with a height of 1,121 feet (342 m), is the tallest building in Philadelphia and the Commonwealth of Pennsylvania, the fourteenth-tallest building in the United States and the tallest outside Manhattan and Chicago. The tower is located on the southwest corner of 18th and Arch Streets, one block west of the Comcast Center, the headquarters of Comcast Corporation. A hotel—the highest in the country—and restaurant are located on the top floors, while central floors contain offices for Comcast software developers and engineers, and the lowest floors have television studios and retail stores.