The year 1959 in film involved some significant events, with Ben-Hur winning a record 11 Academy Awards.

Susana Freyre is an Argentine actress. She appeared in 30 films and television shows between 1945 and 1984. She starred in the film Three Loves in Rio, which was entered into the 9th Berlin International Film Festival.

Domingo Cecílio Alzugaray was an Argentine-born Brazilian actor and journalist who was the founding editor of ISTOÉ, established in 1976.

Antônio Carlos Brasileiro de Almeida Jobim, also known as Tom Jobim, was a Brazilian composer, pianist, songwriter, arranger and singer. Widely considered as one of the great exponents of Brazilian music, Jobim is the artist who internationalized bossa nova and, with the help of important American artists, merged it with jazz in the 1960s to create a new sound with remarkable popular success.

Nelson Pereira dos Santos was a Brazilian film director. He directed films such as Vidas Secas, based on the book with the same name by Brazilian writer Graciliano Ramos. 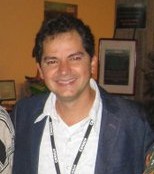 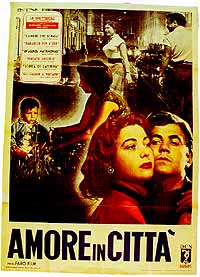 Love in the City is a 1953 Italian anthology film composed of six segments, each with its own writer or director. The anthology consists of the following episodes:

Giovanni Veronesi is an Italian film screenwriter, actor and director. Born in Prato, he is the brother of the writer Sandro Veronesi. 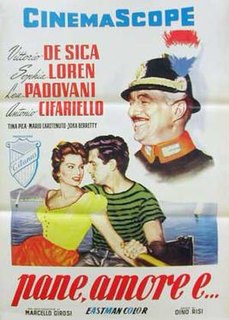 Scandal in Sorrento or Pane, amore e... (1955) is an Italian comedy film directed by Dino Risi. This is the third film of the trilogy, formed by Bread, Love and Dreams in 1953, Bread, Love and Jealousy in 1954. Innovations include the use of color rather than black and white, as well the location of Sorrento instead of the small village of the previous films of the series. At the 6th Berlin International Film Festival it won the Honorable Mention award. 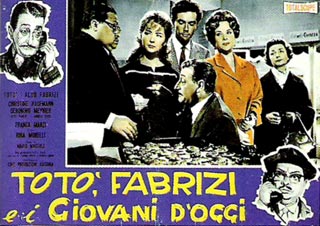 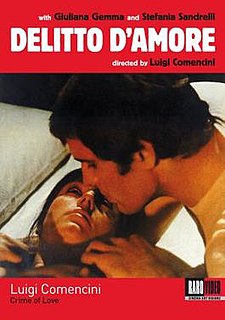 Somewhere Beyond Love is a 1974 Italian drama film directed by Luigi Comencini. It was entered into the 1974 Cannes Film Festival. It won the Grand Prix of the Belgian Film Critics Association.

I Am Love is a 2009 Italian romantic drama film directed by Luca Guadagnino, set in Milan around the year 2000. The film follows an haute bourgeois family through changing times and fortunes, and its disruption by the forces of passion. It is the first installment in Guadagnino's self-described Desire trilogy, preceding A Bigger Splash (2015) and Call Me by Your Name (2017). The cast is led by Tilda Swinton as Emma Recchi. Producers Swinton and Guadagnino developed the film together over an 11-year period. The film's soundtrack uses pre-existing compositions by John Adams.

Lino Capolicchio is an Italian actor, screenwriter, and film director. He won a special David di Donatello acting award for his role in Vittorio de Sica's 1970 film, The Garden of the Finzi-Continis.

Amore amaro is a 1974 Italian drama film directed by Florestano Vancini. For this film Lisa Gastoni was awarded with a Silver Ribbon for best actress.

El precio de tu amor, is a Mexican telenovela produced by Ernesto Alonso for Televisa in 2000. Eduardo Santamarina and Eugenia Cauduro as the protagonists, while Yadhira Carrillo star as the antagonists.

In Old New Mexico is a 1945 American western drama film. Released on May 15, 1965, it was the second of three Cisco Kid films made that year with Duncan Renaldo as Cisco and Martin Garralaga as Pancho.

Amores, querer con alevosía is a Mexican telenovela that originally aired on Azteca Trece from January 15, 2001 to June 22, 2001. The telenovela was created by Bernardo Romero Pereiro and Jimena Romero for the company TV Azteca. It stars by Bárbara Mori and Christian Meier.

Mis dos amores is a 1938 American Spanish-language drama film. Directed by Nick Grinde, the film stars Tito Guízar, Blanca de Castejón, and Emilia Leovalli. It was previewed in New York City on August 11, 1938, and opened in San Juan, Puerto Rico on October 4. During production, its working title was Mi primer amor, and it was the first of a series of films produced by U.S. film studios aimed at the Spanish language market in North and South America.