Three Man (also referred to as Mr. Three or Hat Man) is a drinking game played with two dice. [1] It can be played with at least three people but some consider it better with around five. [2]

A random player is chosen to be the "Three Man", and may be given a hat to wear to signify this role. Players then take turns around the table to roll two six-sided dice, with the following effects: [2]

Threes
For a roll that totals 3, or shows 3 on one of its dice, The Three Man must take a drink. [3]
Sevens
For any roll that totals 7, the person to the left of roller drinks. (If a 3-4 is rolled, "Three Man" must also drink.) [3]
Nines
For any roll that totals 9, the person to the right of roller drinks.[ citation needed ]
Elevens
If you roll 11 you drink.[ citation needed ]
Doubles
Whenever a double is rolled, the roller may pass the dice to one or two other players, who roll the dice and apply the result. If this results in another double, the original roller must drink the sum of the dice. [3]

In the "doubles" variation, whoever rolls doubles (Player A) can "give" them to another player (Player B), who then rolls both the dice to see how many times they must drink. If B rolls doubles, the dice are returned to A, who must roll and drink twice as many times as the value that they roll (e.g., if A rolls 3 and 2, A must drink 10 times). [1]

One version includes special effects for any roll of 1:

Another house rule is a "bathroom penalty": if a player is in the bathroom when it is their turn to roll, they must take a drink for every 5 seconds they are late in returning. [3] 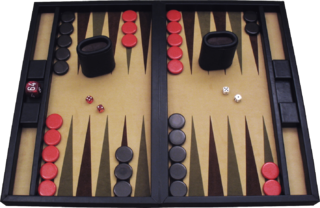 Backgammon is one of the oldest known board games. Its history can be traced back nearly 5,000 years to archeological discoveries in Mesopotamia. It is a two-player game where each player has fifteen pieces that move between twenty-four triangles (points) according to the roll of two dice. The objective of the game is to be first to bear off, i.e. move all fifteen checkers off the board. Backgammon is a member of the tables family, one of the oldest classes of board games. 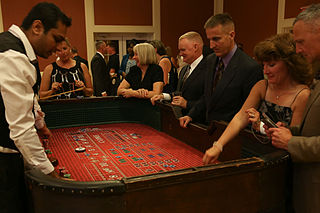 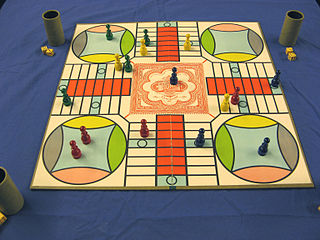 Parcheesi is a brand-name American adaptation of the Indian cross and circle board game Pachisi, published by Parker Brothers and Winning Moves. 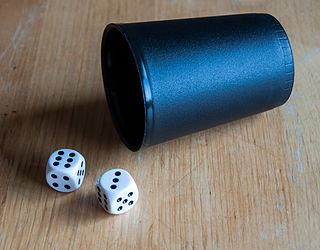 Mia is a simple dice game with a strong emphasis on bluffing and detecting bluff related to Liar's dice.

Pig is a simple dice game first described in print by John Scarne in 1945. As with many games of folk origin, Pig is played with many rule variations. Commercial variants of Pig include Pass the Pigs, Pig Dice, and Skunk. Pig is commonly used by mathematics teachers to teach probability concepts.

Liar's dice is a class of dice games for two or more players requiring the ability to deceive and to detect an opponent's deception. 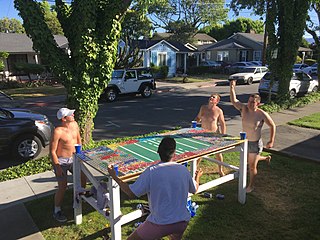 Beer die is a table-based drinking game where opposing players sit or stand at opposite ends and throw a die over a certain height with the goal of either landing the die in their opponent's cup or having the die hit the table and bounce over the scoring area to the floor. The defending team attempts to catch the die one-handed after it hits the table, but before it touches a non-table surface. The game typically consists of two two-player teams with each of the four players having a designated cup on the table, but can also be played one-vs-one.

Cee-lo is a gambling game played with three six-sided dice. There is not one standard set of rules, but there are some constants that hold true to all sets of rules. The name comes from the Chinese Sì-Wŭ-Liù (四五六), meaning "four-five-six". In America it is also called "See-Low," "Four-Five-Six," "The Three Dice Game," "Roll-off!," and by several alternative spellings, as well as simply "Dice." In China it is also called "Sān Liù Bàozi" (三六豹子), or "Three-Six Leopards". In Japan, it is known as "Chinchiro" (チンチロ) or "Chinchirorin" (チンチロリン).

Acey-deucey is a variant of backgammon. Since World War I, it has been a favorite game of the United States Navy, Marine Corps, and Merchant Marine. Some evidence shows that it was played in the early 1900s aboard U.S. Navy ships. The game is believed to be rooted in the Middle East, Greece, or Turkey, where there were variants in which the game started with pieces off the board. 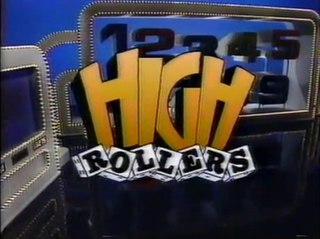 High Rollers is an American television game show that involved contestants trying to win prizes by rolling dice. The format was based on the dice game Shut the Box.

Dice 10,000 is the name of a family dice game, very similar to Farkle. It also goes by other names, including Zilch, Zilchers, Foo, Boxcar, Bogus, and Crap Out.

Gul bara is a backgammon variant. It is also called as ‘Rosespring Backgammon’ or ‘Crazy Narde’. The motive of the game is to move all of one's checkers around the board and bear them off. The first player who bears off all his/her checkers wins the game. The game is popular in Bulgaria, Azerbaijan, Greece, Turkey and North Macedonia.

Kinito is a drinking game involving people, two dice, a table, a cup or basket, and beer or sangria or kalimotxo. Originally from Spain, this game evolves from Kiriki into a more social game. The object of the game is to force either the person preceding you or the person following you to drink.

Mexico is an elimination-style dice game, in which several players agree to play a set number of rounds. After each round, one player is eliminated. When all players but one have been eliminated, the remaining player wins the game. Owing to its extremely simple play-structure, it is generally pursued as a method of gambling, whereby the final remaining player wins the amount of money wagered by each person who was eliminated in earlier rounds. A variant of the drinking game liar's dice known as Mexican or Mia uses similar dice rolls, but has very different game mechanics.

Chingona is a dice game played by two or more players, using four or five dice and a cup. It is usually played to decide who is to pay for the next round of drinks, but betting can also be involved.

Biscuit is a drinking game played with two dice.

Casino security refers to the measures that are taken at casinos to protect the establishment's money, property and patrons. The security protects the casino and its customers from violent crime, theft, and other inappropriate behavior.

Sevens, Elevens, and Doubles is a drinking game played with two dice. The game can be played with as few as two people, but is usually played in a group of five or more. The object of the games is to roll a 7, 11 or any double.

Gambler is a board game originally made by Parker Brothers in 1975.