Three Monks (Chinese :三个和尚; pinyin :Sān gè héshàng), also translated as The Three Buddhist Priests, is a Chinese animated short film produced by the Shanghai Animation Film Studio (SAFS). After the end of the Cultural Revolution in 1976, the film was one of the first animations created as part of the rebirth period. It won the Silver Bear for Best Short Film at the 32nd Berlin International Film Festival.

A young monk lives a simple life on a hilltop Buddhist temple. He has one daily task of hauling two buckets of water up the hill using a carrying pole. One day, a skinny monk arrives. The young monk tries to share the job with the skinny monk, but the carry pole is only long enough for one bucket. They therefore decide to carry one bucket in the center of the pole, together. However, when they go up and down hill, the bucket shifts from one end to another. The weight ends up unevenly distributed, and the two monks end up in an argument. The problem is settled when the two monks measure the exact center of the pole and keep the bucket in position. A few days later, a fat monk joins them. The fat monk drinks all the water upon his arrival, and is told to fetch more water by himself. The fat monk brings up more water, but once again drinks it all. At this point, everyone expects the others to take on the chore, and consequently, no one fetches water despite their thirst. One night, a scrounging rat knocks over a candleholder, leading to a devastating fire in the temple. The three desperate monks finally unite and mount a concerted effort to put out the fire. By the end of the ordeal, they recognize the importance of unity and begin to live a harmonious life. The three monks create a pulley system to fetch water, allowing the three to work together with ease, and ensuring the temple never lacks water again.

SAFS Director A Da first came up with the idea for Three Monks in 1978 after overhearing a conversation at a party which involved the ancient Chinese proverb, "One monk will shoulder two buckets of water, two monks will share the load, but add a third and no one will want to fetch water." [1] He was reminded that this phenomenon continued to be prevalent in modern times, and would be an interesting subject matter for animation. A Da relayed his ideas to screenwriter Bao Lei, who came up with a script had no dialogue, but was humorous and emphasized the character's actions. [2]

The film does not contain any dialogue, allowing it to be watched by any culture, and a different music instrument was used to signify each monk. [3] The film tells the story from the aspect of the buddhist bhikkhu.

Shaolin Monastery, also known as Shaolin Temple, is a renowned temple recognized as the birthplace of Chan Buddhism and the cradle of Shaolin Kung Fu. It is located at the foot of Wuru Peak of the Songshan mountain range in Dengfeng County, Henan Province, China. The name reflects its location in the ancient grove of Mount Shaoshi, in the hinterland of the Songshan mountains. Mount Song occupied a prominent position among Chinese sacred mountains as early as the 1st century BC, when it was proclaimed one of the Five Holy Peaks. It is located some thirty miles southeast of Luoyang, the former capital of the Northern Wei Dynasty (386–534), and forty-five miles southwest of Zhengzhou, the modern capital of Henan Province.

Budai was a Chinese monk who is often identified with and venerated as Maitreya Buddha in Chan Buddhism. With the spread of Chan Buddhism, he also came to be venerated in Vietnam, Korea, and Japan. He is said to have lived around the 10th century in the Wuyue kingdom. His name literally means "cloth sack", and refers to the bag that he is conventionally depicted as carrying as he wanders aimlessly. His jolly nature, humorous personality, and eccentric lifestyle distinguish him from most Buddhist masters or figures. He is almost always shown smiling or laughing, hence his nickname in Chinese, the "Laughing Buddha". As he is traditionally depicted as overweight, he is also referred to as the "Fat Buddha", especially in the Western world.

Xuanzang, born Chen Hui / Chen Yi, also known as Hiuen Tsang, was a 7th-century Chinese Buddhist monk, scholar, traveler, and translator. He is known for the epoch-making contributions to Chinese Buddhism, the travelogue of his journey to India in 629–645 CE, his efforts to bring over 657 Indian texts to China, and his translations of some of these texts. 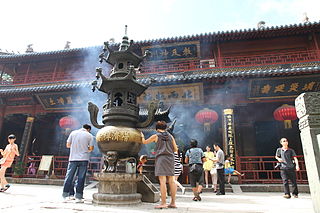 Puji Temple is a Buddhist temple located on the island of Putuoshan in Zhoushan, Zhejiang, China.

White Horse Temple is a Buddhist temple in Luoyang, Henan that, according to tradition, is the first Buddhist temple in China, having been first established in 68 AD under the patronage of Emperor Ming in the Eastern Han dynasty. 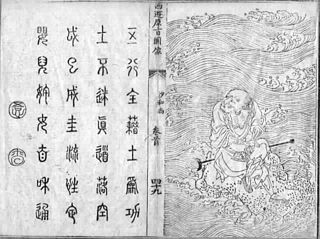 Sha Wujing is one of the three disciples of the Buddhist pilgrim Tang Sanzang in the 16th century novel Journey to the West written by Wu Cheng'en in the Ming dynasty, although versions of his character predate the Ming novel. In the source novel, his background is the least developed of the pilgrims, and he contributes the least to their efforts.

Ciqikou is an ancient town in the Shapingba District of Chongqing Municipality, People's Republic of China. It was originally called Longyinzhen and was also known as Little Chongqing. 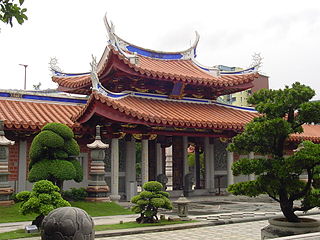 Siong Lim Temple, also known as Lian Shan Shuang Lin Monastery, is a Buddhist monastery located in Toa Payoh, Singapore, next to the Pan Island Expressway. The temple was founded in 1898, but the construction of the premises only began in 1902 by Low Kim Pong and was completed in 1907. The monastery was gazetted as a national monument in 1980 and subsequently underwent a decade-long restoration that began in 1991. The temple now boasts a seven storey gold-topped pagoda which is a replica of the 800-year-old Shanfeng temple pagoda in Fujian. It has a Columbarium for Tomb Sweeping Day.

Wu Yong is a fictional character in Water Margin, one of the Four Great Classical Novels in Chinese literature. Nicknamed "Knowledgeable Star", he ranks third among the 36 Heavenly Spirits, the first third of the 108 Stars of Destiny.

Humanistic Buddhism is a modern philosophy practiced by Buddhist groups originating from Chinese Buddhism which places an emphasis on integrating Buddhist practices into everyday life and shifting the focus of ritual from the dead to the living.

The kaihōgyō (回峰行) is an ascetic practice performed by Tendai Buddhist monks. The practice involves walking a route on Mount Hiei, the longest of which takes 1000 days to complete; all the while offering prayers at halls, shrines and other sacred places.

During his reign as emperor of China, Emperor Wu of Liang embraced and promoted Buddhism. Several times he became a Buddhist monk and forced his court to purchase him back with substantial offerings to the sangha. In 517 he ordered the destruction of Taoist temples and forced Taoist priests to return to lay life. Some of his other reforms, such as the disallowing of capital punishment and of the animal sacrifices during ancestral ceremonies, conformed with his Buddhist convictions.

Shanghai Animation Film Studio also known as SAFS is a Chinese animation studio based in Shanghai, China, as part of the Shanghai Film Group Corporation. Shanghai Animation Film Studio was officially established in April, 1957, led by pioneering animators and artists including Te Wei, and Wan Brothers. It has produced around 500 films with over 40,000 minutes of original animation data source, covering 80% of China's domestic animation production.

This is a page on cultural depictions of Yue Fei. To read his main article, please see Yue Fei. 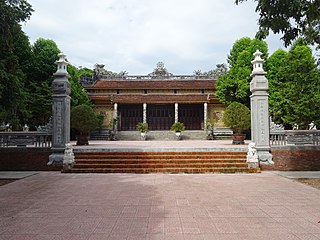 Báo Quốc Temple is a Buddhist temple in the historic city of Huế in central Vietnam. It was one of the three national temples of the city during the time of the Nguyễn Dynasty. 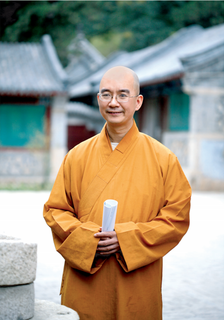 Xuecheng is a Chinese Buddhist monk, a former member of the National Committee of the Chinese People's Political Consultative Conference, and a popular blogger. He was president of the Buddhist Association of China from 2015 to 2018 when he resigned after allegations that he had engaged in corruption and sexual assault surfaced. He was ordered to be punished by the National Religious Affairs Administration after they corroborated the allegations. 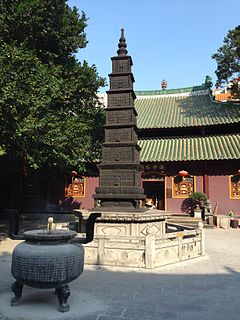 The Hoi Tong Monastery, also known by many other names, is a Buddhist temple and monastery on Henan Island in Guangzhou, China. It shares its grounds with the city's Haichuang Park.

Vietnamese numismatic charms, also known as Vietnamese amulets, Vietnamese talismans, or simply Vietnamese charms, refer to a family of cash coin-like and other numismatic inspired types of charms that like the Japanese and Korean variants are derived from Chinese numismatic charms, but have evolved around the customs of the Vietnamese culture although most of these charms resemble Vietnamese cash coins and the amulet coins of China. These "coins" were used at temples, as tokens within the imperial palace, and as everyday charms with supposed magical power such as having the ability to curse evil spirits and bogies. Some of these charms contained the inscriptions of real circulating cash coins but with added imagery.