Three O'Clock in the Morning

"Three O'Clock in the Morning" is a waltz composed by Julián Robledo that was extremely popular in the 1920s. Robledo published the music as a piano solo in 1919, and two years later Dorothy Terriss wrote the lyrics. Paul Whiteman's instrumental recording in 1922 became one of the first 20 recordings in history to sell over 1 million copies. [1]

Julián Robledo, an Argentine composer born in Spain, published the music for "Three O'Clock in the Morning" in New Orleans in 1919. [1] [2] In 1920 the song was also published in England and Germany, and lyrics were added in 1921 by Dorothy Terriss (the pen name of Theodora Morse). [3] The song opens with chimes playing Westminster Quarters followed by three strikes of the chimes to indicate three o'clock. The lyrics then begin: It's three o'clock in the morning, we've danced the whole night through. [4]

This "Waltz Song with Chimes" created a sensation when it was performed in the final scene of the Greenwich Village Follies of 1921. [4] In this performance Richard Bold and Rosalind Fuller sang the song while ballet dancers Margaret Petit and Valodia Vestoff rang the chimes. [3] Frank Crumit recorded the song for Columbia Records in 1921, but its biggest success came in 1922 when Paul Whiteman released a recording on the Victor label, selling over 3.5 million copies of the record, and fueling the sale of over 1 million copies of the sheet music. [5]

The song was also repatriated to the home country of the composer, Argentina, where it was published as "Las Tres de la Mañana" by G. Ricordi & C. and interpreted as a tango vals by the orchestra of Enrique Rodriguez in 1946. [8]

The song is also referred to in John Cheever's short story "Goodbye, My Brother," first published in the August 25, 1951 edition of The New Yorker. The song is playing when the unnamed narrator, a member of the Pommeroy family, arrives at the annual costume dance held at the club house on the island of Laud's Head, a fictional island off the coast of Massachusetts. The narrator explains that the theme of the party was to "come as you wish you were." The story's thematic structure relies heavily on ideas about nostalgia and a longing for a long-gone era.

Rhapsody in Blue is a 1924 musical composition written by George Gershwin for solo piano and jazz band, which combines elements of classical music with jazz-influenced effects. Commissioned by bandleader Paul Whiteman, the work premiered in a concert titled "An Experiment in Modern Music" on February 12, 1924, in Aeolian Hall, New York City. Whiteman's band performed the rhapsody with Gershwin playing the piano. Whiteman's arranger Ferde Grofé orchestrated the rhapsody several times including the 1924 original scoring, the 1926 pit orchestra scoring, and the 1942 symphonic scoring.

This is a list of notable events in music that took place in the year 1922.

Mitchell Parish was an American lyricist.

Theodora Morse was an American song writer and composer. She was a Tin Pan Alley lyricist who collaborated to produce a number of popular songs. 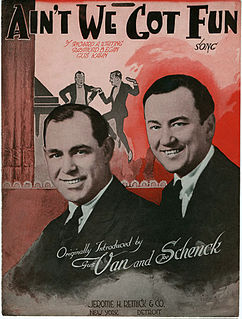 "Ain't We Got Fun" is a popular foxtrot published in 1921 with music by Richard A. Whiting, lyrics by Raymond B. Egan and Gus Kahn.

Screen Gems is a 1984 album by Elkie Brooks comprising Brooks' interpretations of songs from the movies from the 1920s and 1930s. The album's title references all of the selections being introduced, or prominently featured, in mid-20th century movie releases.

"Wonderful One" is a popular song recorded by the Paul Whiteman Orchestra on January 25, 1923 in New York and was released as Victor 19019-B. The record reached no. 3 on the Billboard chart. The song was also recorded as "My Wonderful One".

"Yesterdays" is a 1933 song about nostalgia composed by Jerome Kern with lyrics by Otto Harbach. They wrote the song for Roberta, a musical based on the novel Gowns by Roberta by Alice Duer Miller. "Yesterdays" was overshadowed by the musical's more popular song, "Smoke Gets in Your Eyes", which was a number one hit for the Paul Whiteman orchestra.

”Hard Hearted Hannah, the Vamp of Savannah” is a popular song with words by Jack Yellen, Bob Bigelow, and Charles Bates, and music by Milton Ager. The song was published in June 1924 by Ager, Yellen & Bornstein, Inc., New York. “Hard Hearted Hannah” tells in humorous fashion the story of a sadistic "vamp" or femme fatale from Savannah, Georgia. 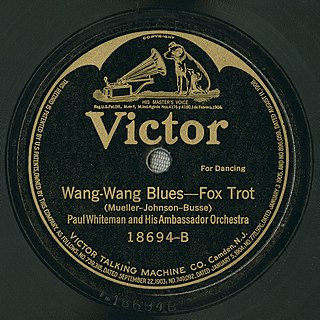 "Wang Wang Blues" is a 1920 jazz composition written by Henry Busse, Gussie Mueller, and Theron E. "Buster" Johnson, with lyrics by Leo Wood. The song was released as a 78 single by Paul Whiteman and his Orchestra featuring Henry Busse on trumpet. The song is a pop and jazz standard.

Julián Robledo (1887–1940) was a composer best known for the song "Three O'Clock in the Morning". Robledo lived in Buenos Aires, Argentina in the early 1900s where he played piano in tango orchestras and composed some of the earliest published tangos. "Three O'Clock in the Morning" was published in the United States in 1919. The song was recorded by Paul Whiteman in 1922 and became one of the first 20 recordings in history to achieve sales of over one million records. The piece features prominently in the December 27, 1950 episode of radio's The Harold Peary Show. 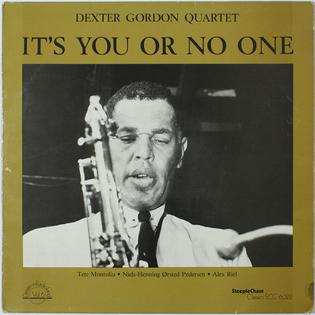 It's You or No One is a live album by American saxophonist Dexter Gordon recorded at the Jazzhus Montmartre in Copenhagen, Denmark in 1964 by Danmarks Radio and released on the SteepleChase label in 1983.