The Three Pilgrimage Festivals, in Hebrew Shalosh Regalim (שלוש רגלים), are three major festivals in Judaism—Pesach (Passover), Shavuot (Weeks or Pentecost), and Sukkot (Tabernacles, Tents or Booths)—when all ancient Israelites who were able would make a pilgrimage to the Temple in Jerusalem, as commanded by the Torah. In Jerusalem, they would participate in festivities and ritual worship in conjunction with the services of the kohanim ("priests") at the Temple.

After the destruction of the Second Temple and until the building of the Third Temple, the actual pilgrimages are no longer obligatory upon Jews, and no longer take place on a national scale. During synagogue services the related passages describing the holiday being observed are read aloud from a Torah scroll on the bimah (platform) used at the center of the synagogue services. During the Jewish holidays in modern-day Israel, many observant Jews living in or near Jerusalem make an effort to attend prayer services at the Western Wall emulating the ancient pilgrimages in some small fashion. Samaritans make pilgrimages to Mount Gerizim three times a year to this day.

Sources in the Hebrew Bible

In his vision of a restored Jerusalem, the prophet Isaiah refers to Zion as "the city of our appointed feasts," [4] . Zechariah foretells a messianic era when all nations will come to Jerusalem for the feast of Sukkot. [5] [6] The Songs of Ascent or pilgrim psalms (Psalms 120-134) are associated with the pilgrims' journey to Jerusalem. [7] 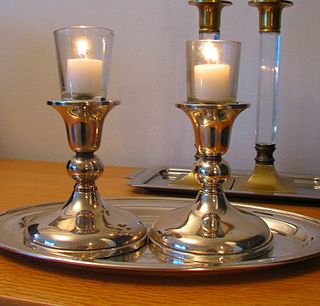 Jewish holidays, also known as Jewish festivals or Yamim Tovim, are holidays observed in Judaism and by Jews throughout the Hebrew calendar. They include religious, cultural and national elements, derived from three sources: biblical mitzvot ("commandments"), rabbinic mandates, and the history of Judaism and the State of Israel.

Matzo, matzah, or matza is an unleavened flatbread that is part of Jewish cuisine and forms an integral element of the Passover festival, during which chametz is forbidden. 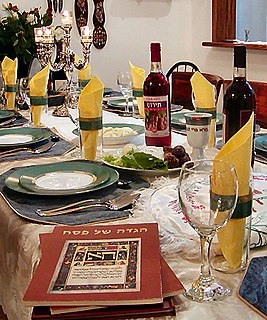 Passover, also called Pesach, is a major Jewish holiday that celebrates the exodus of the Israelites from slavery in Egypt, which occurs on the 15th day of the Hebrew month of Nisan, the first month of Aviv, or spring. The word Pesach or Passover can also refer to the Korban Pesach, the paschal lamb that was offered when the Temple in Jerusalem stood; to the Passover Seder, the ritual meal on Passover night; or to the Feast of Unleavened Bread. One of the biblically ordained Three Pilgrimage Festivals, Passover is traditionally celebrated in the Land of Israel for seven days and for eight days among many Jews in the Diaspora, based on the concept of yom tov sheni shel galuyot. 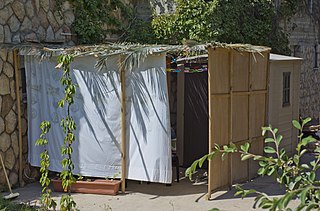 Sukkot, is a Torah-commanded holiday celebrated for seven days from the 15th day of the month of Tishrei. It is one of the Three Pilgrimage Festivals on which those Israelites who could were commanded to make a pilgrimage to the Temple at Jerusalem.

Shemini Atzeret is a Jewish holiday. It is celebrated on the 22nd day of the Hebrew month of Tishrei in the Land of Israel, and on the 22nd and 23rd outside the Land, usually coinciding with late September or early October. It directly follows the Jewish festival of Sukkot which is celebrated for seven days, and thus Shemini Atzeret is literally the eighth day. It is a separate—yet connected—holy day devoted to the spiritual aspects of the festival of Sukkot. Part of its duality as a holy day is that it is simultaneously considered to be both connected to Sukkot and also a separate festival in its own right.

The wave offering or sheaf offering or omer offering was an offering (korban) made by the Jewish priests to God. The sheaf or omer or wave-offering then became the property of the priests.

Shavuot, or Shavuos in some Ashkenazi usage, commonly known in English as the Feast of Weeks, is a Jewish holiday that occurs on the sixth day of the Hebrew month of Sivan. In the Bible, Shavuot marked the wheat harvest in the Land of Israel. In addition, Orthodox rabbinic traditions teach that the date also marks the revelation of the Torah to Moses and the Israelites at Mount Sinai, which, according to the tradition of Orthodox Judaism, occurred at this date in 1314 BCE.

Counting of the Omer is an important verbal counting of each of the forty-nine days starting with the Wave Offering of a sheaf of ripe grain with a sacrifice immediately following the commencement of the grain harvest, and the First Fruits festival celebrating the end of the grain harvest, known as Feast of Weeks/Shavuot/Pentecost in Mosaic Law ; or in the varying current Jewish holidays traditions, the period between the Passover or Feast of Unleavened Bread, and Shavuot. This is the second of the three annual Mosaic Law feast periods.

In Judaism, the korban, also spelled qorban or corban, is any of a variety of sacrificial offerings described and commanded in the Torah. The plural form is korbanot, korbanoth or korbans.

Hallel is a Jewish prayer, a verbatim recitation from Psalms 113–118 which is recited by observant Jews on Jewish holidays as an act of praise and thanksgiving. 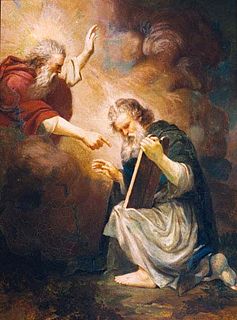 Mishpatim is the eighteenth weekly Torah portion in the annual Jewish cycle of Torah reading and the sixth in the Book of Exodus. The parashah sets out a series of laws, which some scholars call the Covenant Code. It reports the people's acceptance of the covenant with God. The parashah constitutes Exodus 21:1–24:18. The parashah is made up of 5,313 Hebrew letters, 1,462 Hebrew words, 118 verses, and 185 lines in a Torah scroll. 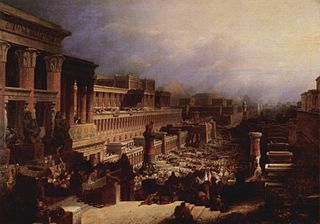 Bo is the fifteenth weekly Torah portion in the annual Jewish cycle of Torah reading and the third in the Book of Exodus. The parashah constitutes Exodus 10:1–13:16. The parashah tells of the last three plagues on Egypt and the first Passover. 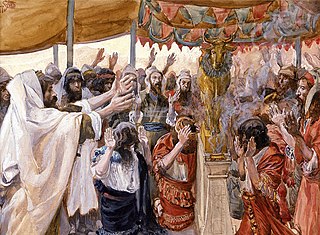 Ki Tisa, Ki Tissa, Ki Thissa, or Ki Sisa is the 21st weekly Torah portion in the annual Jewish cycle of Torah reading and the ninth in the Book of Exodus. The parashah tells of building the Tabernacle, the incident of the Golden calf, the request of Moses for God to reveal God's Attributes, and how Moses became radiant.

Emor is the 31st weekly Torah portion in the annual Jewish cycle of Torah reading and the eighth in the Book of Leviticus. The parashah describes purity rules for priests, recounts the holy days, describes the preparations for the lights and bread in the sanctuary, and tells the story of a blasphemer and his punishment. The parashah constitutes Leviticus 21:1–24:23. It has the most verses of any of the weekly Torah portions in the Book of Leviticus, and is made up of 6,106 Hebrew letters, 1,614 Hebrew words, 124 verses and 215 lines in a Torah Scroll.

Pinechas, Pinchas, Pinhas, or Pin'has is the 41st weekly Torah portion in the annual Jewish cycle of Torah reading and the eighth in the Book of Numbers. It tells of Phinehas's killing of a couple, ending a plague, and of the daughters of Zelophehad's successful plea for land rights. It constitutes Numbers 25:10–30:1. The parashah is made up of 7,853 Hebrew letters, 1,887 Hebrew words, 168 verses, and 280 lines in a Torah scroll. 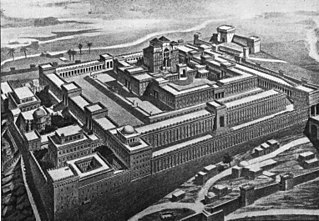 Re'eh, Reeh, R'eih, or Ree is the 47th weekly Torah portion in the annual Jewish cycle of Torah reading and the fourth in the Book of Deuteronomy. It comprises Deuteronomy 11:26–16:17. In the parashah, Moses set before the Israelites the choice between blessing and curse. Moses instructed the Israelites in the laws that they were to observe, including the law of a single centralized place of worship. Moses warned against following other gods and their prophets and set forth the laws of kashrut, tithes, the Sabbatical year, the Hebrew slave, firstborn animals, and the three pilgrim festivals.

Special Shabbatot are Jewish Shabbat days on which special events are commemorated. Variations in the liturgy and special customs differentiate them from the regular Sabbaths and each one is referred to by a special name. Two such Sabbaths, Shabbat Mevarchim, which immediately precedes a new month, and Shabbat Rosh Chodesh, which coincides with the new month, can occur on several occasions throughout the year. The other special Sabbaths occur on specific sabbaths before or coinciding with certain Jewish holidays during the year, according to a fixed pattern.

Rosh HaShanah, literally meaning "head [of] the year", is the Jewish New Year. The biblical name for this holiday is Yom Teruah, literally "day of shouting or blasting." It is the first of the Jewish High Holy Days, as specified by Leviticus 23:23–25, that occur in the late summer/early autumn of the Northern Hemisphere. The High Holy Days comprises both Rosh HaShanah and Yom Kippur.

On Yom Tov the Torah is read during Shacharit services.