Three Preludes may refer to:

A suite, in Western classical music and jazz, is an ordered set of instrumental or orchestral/concert band pieces. It originated in the late 14th century as a pairing of dance tunes and grew in scope to comprise up to five dances, sometimes with a prelude, by the early 17th century. The separate movements were often thematically and tonally linked. The term can also be used to refer to similar forms in other musical traditions, such as the Turkish fasıl and the Arab waslah and nuubaat.

In ballet, a pas de deux[pɑ d(ə) dø] is a dance duet in which two dancers, typically a male and a female, perform ballet steps together. The pas de deux is characteristic of classical ballet and can be found in many well-known ballets, including Sleeping Beauty, Swan Lake, and Giselle. It is most often performed by a male and a female though there are exceptions, such as in the film White Nights, in which a pas de deux is performed by Mikhail Baryshnikov and Gregory Hines. 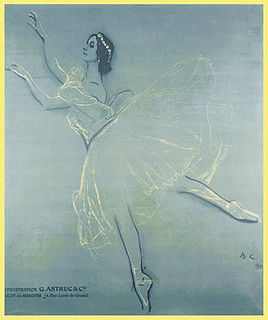 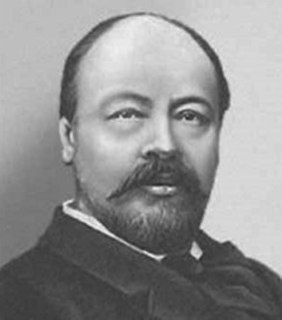 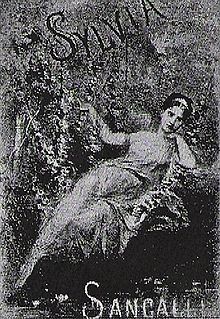 Sylvia, originally Sylvia, ou La nymphe de Diane, is a full-length ballet in two or three acts, first choreographed by Louis Mérante to music by Léo Delibes in 1876. Sylvia is a typical classical ballet in many respects, yet it has many interesting features that make it unique. Sylvia is notable for its mythological Arcadian setting, creative choreographies, expansive sets and, above all, its remarkable score.

Prélude à l'après-midi d'un faune, known in English as Prelude to the Afternoon of a Faun, is a symphonic poem for orchestra by Claude Debussy, approximately 10 minutes in duration. It was composed in 1894 and first performed in Paris on 22 December 1894, conducted by Gustave Doret. The flute solo was played by Georges Barrère.

L'après-midi d'un faune may refer to the following:

Jeux (Games) is a ballet written by Claude Debussy. Described as a "poème dansé", it was written for Sergei Diaghilev's Ballets Russes with choreography by Vaslav Nijinsky. Debussy initially objected to the scenario but reconsidered the commission when Diaghilev doubled the fee. Debussy wrote the score quickly, from mid-August to mid-September 1912. Robert Orledge has analysed the chronology of Debussy's composition and preserved manuscripts of the score.

On the Dnieper, Op. 51, also known by its French language title Sur le Borysthène, composed in 1932, is the fourth ballet composed by Sergei Prokofiev. He was commissioned to compose this work by the Ballet de l'Opéra National de Paris after the unexpected death of Ballets Russes choreographer Sergei Diaghilev in 1929 and following on the heels of Prokofiev's successful score for The Prodigal Son.

L'histoire de Manon, generally referred to as Manon, is a ballet choreographed by Kenneth MacMillan to music by Jules Massenet and based on the 1731 novel Manon Lescaut by Abbé Prévost. The ballet was first performed by The Royal Ballet in London in 1974 with Antoinette Sibley and Anthony Dowell in the leading roles. It continues to be performed and recognised internationally.

The Seasons is a ballet with music by John Cage and choreography by Merce Cunningham, first performed in 1947. It was Cage's first piece for orchestra and also the first to use what Cage later called the gamut technique, albeit in an early form.

Three Preludes is a ballet made for Mikhail Baryshnikov by Mark Morris to eponymous music by George Gershwin for his own company and presented as a piece d'occasion by the New York City Ballet. The performance took place June 16, 1992, at the New York State Theater, Lincoln Center.

Agon (1957) is a neoclassical ballet for twelve dancers, with music by Igor Stravinsky and choreography by George Balanchine. Stravinsky began its composition in December 1953 but was interrupted the next year; resumed work in 1956 and concluded on April 27, 1957. The music was first performed on June 17, 1957, in Los Angeles conducted by Robert Craft, while the first stage performance was given by the New York City Ballet on December 1, 1957, at the City Center of Music and Drama, New York. The composition's long gestation period covers an interesting juncture in Stravinsky's composing career, in which he moved from a diatonic musical idiom to one based on twelve-tone technique; the music of the ballet thus demonstrates a unique symbiosis of musical idioms. The ballet has no story, but consists of a series of dance movements in which various groups of dancers interact in pairs, trios, quartets, etc. A number of the movements are based on 17th-century French court dances – saraband, galliard and bransle. It was danced as part of City Ballet's 1982 Stravinsky Centennial Celebration.

Afternoon of a Faun is a ballet made by Jerome Robbins, subsequently ballet master of New York City Ballet, to Debussy's Prélude à l'après-midi d'un faune. The premiere took place on 14 May 1953 at City Center of Music and Drama, New York, with scenery and lighting by Jean Rosenthal and costumes by Irene Sharaff. Note: Tanaquil LeClercq's costume was not by Irene Sharaff. It was made for her by her mother, Edith Le Clercq.

A pièce d'occasion is a composition, dance or theatrical piece composed, often commissioned, for a festive occasion. 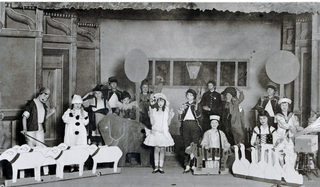