Last updated December 20, 2022
Not to be confused with Prisoner's dilemma, Hangman paradox, or Prisoners and hats puzzle.
Mathematical problem

The Three Prisoners problem appeared in Martin Gardner's "Mathematical Games" column in Scientific American in 1959. [1] [2] It is mathematically equivalent to the Monty Hall problem with car and goat replaced respectively with freedom and execution.

The warden tells A that B is to be executed. Prisoner A is pleased because he believes that his probability of surviving has gone up from 1/3 to 1/2, as it is now between him and C. Prisoner A secretly tells C the news, who reasons that A's chance of being pardoned is unchanged at 1/3, but he is pleased because his own chance has gone up to 2/3. Which prisoner is correct?

The explanation above may be summarised in the following table. As the warden is asked by A, he can only answer B or C to be executed (or "not pardoned").

As the warden has answered that B will not be pardoned, the solution comes from the second column "not B". It appears that the odds for A vs. C to be pardoned are 1:2.

the events that the corresponding prisoner will be pardoned, and

the event that the warden tells A that prisoner B is to be executed, then, using Bayes' theorem, the posterior probability of A being pardoned, is: [3]

The probability of C being pardoned, on the other hand, is:

The crucial difference making A and C unequal is that

. If A will be pardoned, the warden can tell A that either B or C is to be executed, and hence

; whereas if C will be pardoned, the warden can only tell A that B is executed, so

Prisoner A only has a 1/3 chance of pardon. Knowing whether B or C will be executed does not change his chance. After he hears B will be executed, Prisoner A realizes that if he will not get the pardon himself it must only be going to C. That means there is a 2/3 chance for C to get a pardon. This is comparable to the Monty Hall problem.

The following scenarios may arise:

The key to this problem is that the warden may not reveal the name of a prisoner who will be pardoned. If we eliminate this requirement, it can demonstrate the original problem in another way. The only change in this example is that prisoner A asks the warden to reveal the fate of one of the other prisoners (not specifying one that will be executed). In this case, the warden flips a coin and chooses one of B and C to reveal the fate of. The cases are as follows:

Each scenario has a 1/6 probability. The original Three Prisoners problem can be seen in this light: The warden in that problem still has these six cases, each with a 1/6 probability of occurring. However, the warden in the original case cannot reveal the fate of a pardoned prisoner. Therefore, in case 3 for example, since saying "B is pardoned" is not an option, the warden says "C is executed" instead (making it the same as case 4). That leaves cases 4 and 5 each with a 1/3 probability of occurring and leaves us with the same probability as before.

The tendency of people to provide the answer 1/2 is likely due to a tendency to ignore context that may seem unimpactful. For example, how the question is posed to the warden can affect the answer. This can be shown by considering a modified case, where

and everything else about the problem remains the same. [3] Using Bayes' Theorem once again:

However, if A simply asks if B will be executed, and the warden responds with "yes", the probability that A is pardoned becomes:

Another likely overlooked assumption is that the warden has a probabilistic choice. Let us define

If we assume that

, that is, that we do not take into account that the warden is making a probabilistic choice, then

. However, the reality of the problem is that the warden is flipping a coin (

Judea Pearl (1988) used a variant of this example to demonstrate that belief updates must depend not merely on the facts observed but also on the experiment (i.e., query) that led to those facts. [6] 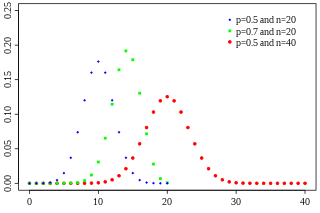 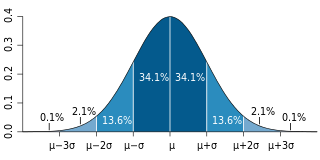 In probability theory and statistics, Bayes' theorem, named after Thomas Bayes, describes the probability of an event, based on prior knowledge of conditions that might be related to the event. For example, if the risk of developing health problems is known to increase with age, Bayes' theorem allows the risk to an individual of a known age to be assessed more accurately than simply assuming that the individual is typical of the population as a whole. 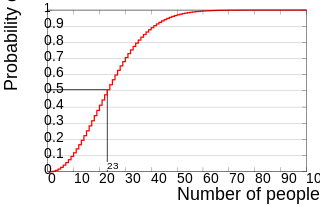 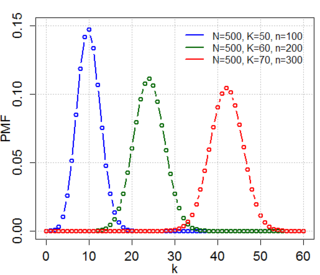 In probability theory and statistics, the beta distribution is a family of continuous probability distributions defined on the interval [0, 1] in terms of two positive parameters, denoted by alpha (α) and beta (β), that appear as exponents of the random variable and control the shape of the distribution.

A randomized algorithm is an algorithm that employs a degree of randomness as part of its logic or procedure. The algorithm typically uses uniformly random bits as an auxiliary input to guide its behavior, in the hope of achieving good performance in the "average case" over all possible choices of random determined by the random bits; thus either the running time, or the output are random variables. 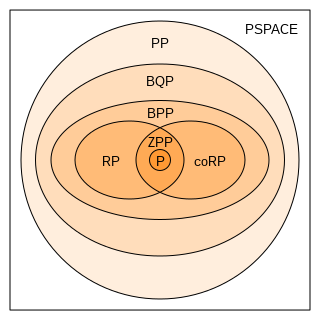 The Solovay–Strassen primality test, developed by Robert M. Solovay and Volker Strassen in 1977, is a probabilistic test to determine if a number is composite or probably prime. The idea behind the test was discovered by M. M. Artjuhov in 1967 (see Theorem E in the paper). This test has been largely superseded by the Baillie–PSW primality test and the Miller–Rabin primality test, but has great historical importance in showing the practical feasibility of the RSA cryptosystem. The Solovay–Strassen test is essentially an Euler–Jacobi pseudoprime test. 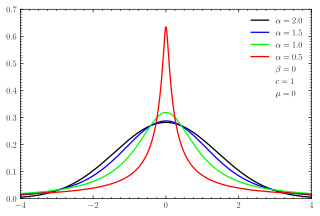 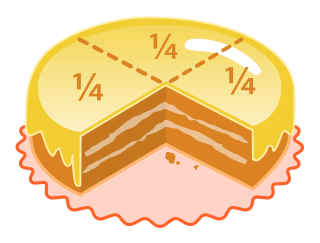 A fraction represents a part of a whole or, more generally, any number of equal parts. When spoken in everyday English, a fraction describes how many parts of a certain size there are, for example, one-half, eight-fifths, three-quarters. A common, vulgar, or simple fraction consists of a numerator, displayed above a line, and a non-zero denominator, displayed below that line. Numerators and denominators are also used in fractions that are not common, including compound fractions, complex fractions, and mixed numerals.

The Boy or Girl paradox surrounds a set of questions in probability theory, which are also known as The Two Child Problem, Mr. Smith's Children and the Mrs. Smith Problem. The initial formulation of the question dates back to at least 1959, when Martin Gardner featured it in his October 1959 "Mathematical Games column" in Scientific American. He titled it The Two Children Problem, and phrased the paradox as follows:

Lottery mathematics is used to calculate probabilities of winning or losing a lottery game. It is based primarily on combinatorics, particularly the twelvefold way and combinations without replacement.

Freivalds' algorithm is a probabilistic randomized algorithm used to verify matrix multiplication. Given three n × n matrices , , and , a general problem is to verify whether . A naïve algorithm would compute the product explicitly and compare term by term whether this product equals . However, the best known matrix multiplication algorithm runs in time. Freivalds' algorithm utilizes randomization in order to reduce this time bound to with high probability. In time the algorithm can verify a matrix product with probability of failure less than . 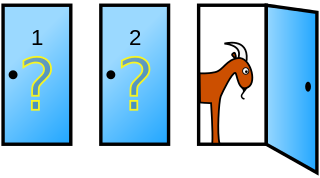 The Monty Hall problem is a brain teaser, in the form of a probability puzzle, loosely based on the American television game show Let's Make a Deal and named after its original host, Monty Hall. The problem was originally posed in a letter by Steve Selvin to the American Statistician in 1975. It became famous as a question from reader Craig F. Whitaker's letter quoted in Marilyn vos Savant's "Ask Marilyn" column in Parade magazine in 1990:

Suppose you're on a game show, and you're given the choice of three doors: Behind one door is a car; behind the others, goats. You pick a door, say No. 1, and the host, who knows what's behind the doors, opens another door, say No. 3, which has a goat. He then says to you, "Do you want to pick door No. 2?" Is it to your advantage to switch your choice?