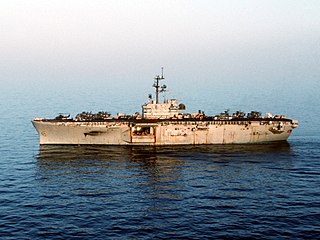 Irvine Glacier is a glacier, 40 miles (64 km) long, draining southeast between the Guettard Range and the Rare Range into the northern part of Gardner Inlet, Antarctica. It was discovered by the Ronne Antarctic Research Expedition (RARE), 1947–48, under Finn Ronne, who named it for George J. Irvine, of the Engineer Depot at Fort Belvoir, Virginia, who outlined the RARE photographic program. 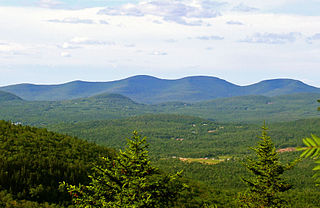 The Blackhead Mountains range is located near the northern end of the Catskill Mountains, in Greene County, New York, United States, where it divides the towns of Windham and Jewett. The three named peaks in the range — Thomas Cole Mountain, Black Dome, and Blackhead Mountain — are the fourth-, third-, and fifth-highest peaks in the Catskills, respectively. The gap between Thomas Cole and Black Dome is, at 3,700 feet, the highest in the Catskills.

Jaburg Glacier is a broad glacier draining westward between the Dufek Massif and the Cordiner Peaks in the Pensacola Mountains of Antarctica. It was mapped by the United States Geological Survey from surveys and U.S. Navy air photos, 1956–66. The glacier was named by the Advisory Committee on Antarctic Names after Lieutenant Conrad J. Jaburg, U.S. Navy, a helicopter pilot with the Ellsworth Station winter party, 1957.

Le Couteur Glacier is a glacier, 15 nautical miles (28 km) long, which drains the northwest slopes of Mount Hall and Mount Daniel and flows north along the west side of the Lillie Range to the Ross Ice Shelf, Antarctica. It was named by the Southern Party of the New Zealand Geological Survey Antarctic Expedition (1963–64) for P. C. Le Couteur, a geologist with the New Zealand Federated Mountain Clubs Antarctic Expedition, 1962–63.

Miller Crag is a bold and conspicuous outcropping of bare rock 1,450 metres (4,760 ft) high, standing 3 nautical miles (6 km) west-southwest of Sutley Peak in the western extremity of the Jones Mountains in Antarctica. It was mapped by the University of Minnesota Jones Mountains Party of 1960–61, who named it for Thomas P. Miller, a geologist with the party.

Sea Cloud is a sailing cruise ship of the Sea Cloud Cruises line. Initially built as a private yacht, it subsequently served as a weather ship for the United States Coast Guard and United States Navy during World War II. The ship served as the first racially integrated warship in the United States Armed Forces since the American Civil War. Following the war, Sea Cloud was returned to private ownership, serving as a yacht for numerous people, including as presidential yacht of the Dominican Republic. The ship currently sails in Europe and the Caribbean as part of a fleet of sail cruise ships operated by Sea Cloud Cruises GmbH of Hamburg, Germany, often under contract to the National Geographic Society.

Henningsen Glacier is a glacier 3 nautical miles (6 km) long, flowing southwest to the south coast of South Georgia between Cape Darnley and Rocky Bay. It was surveyed in the period 1951–57 by the South Georgia Survey expedition led by Duncan Carse, and was named by the UK Antarctic Place-Names Committee for Leonard Henningsen, Manager of Tønsbergs Hvalfangeri, Husvik, 1945–50.

Bowen Cirque is a cirque north-northeast of Mount Wegener in the Read Mountains, Shackleton Range. It was photographed from the air by the U.S. Navy, 1967, and surveyed by the British Antarctic Survey, 1968–71. In association with the names of geologists grouped in this area, it was named by the UK Antarctic Place-Names Committee in 1971 after Norman Levi Bowen, American experimental petrologist who specialized in the phase equilibria of silicate melt systems.

Strømme Ridge is a broad ice-covered ridge, 15 nautical miles (28 km) long, trending northwest-southeast between the Muus and Soto Glaciers. The ridge terminates at the north side of Odom Inlet on the east coast of Palmer Land. It was mapped by the United States Geological Survey in 1974 and named by the Advisory Committee on Antarctic Names for Jan A. Strømme,a Norwegian oceanographer from the University of Bergen, a member of the International Weddell Sea Oceanographic Expeditions, 1968 and 1969.

Dismal Buttress is a mainly ice-free rock bluff, overlooking the west side of the head of Shackleton Glacier about 3 nautical miles (6 km) northwest of Roberts Massif. It was so named because of several depressing incidents experienced here by the Southern Party of the New Zealand Geological Survey Antarctic Expedition (1961–62), including the loss of Dismal, the party's only lead dog, which had to be destroyed.

Flanagan Glacier is a glacier in the Pioneer Heights of the Heritage Range, Antarctica, draining east from Thompson Escarpment between the Gross Hills and the Nimbus Hills to the confluent ice at the lower end of Union Glacier. It was mapped by the United States Geological Survey from surveys and U.S. Navy air photos, 1961–66, and was named by the Advisory Committee on Antarctic Names for Lieutenant Walter B. Flanagan, an assistant maintenance officer with U.S. Navy Squadron VX-6 at McMurdo Station during Operation Deep Freeze 1963 and 1964.

Goldsmith Glacier is a glacier flowing west-northwest through the Theron Mountains of Antarctica, 6 nautical miles (11 km) south of Tailend Nunatak. It was first mapped in 1956–57 by the Commonwealth Trans-Antarctic Expedition (CTAE) and named for Rainer Goldsmith, medical officer with the advance party of the CTAE in 1955–56.

Hyde Glacier is a short glacier flowing east through the Edson Hills to join Union Glacier, in the Heritage Range, Antarctica. It was mapped by the United States Geological Survey from surveys and U.S. Navy air photos, 1961–66, and was named by the Advisory Committee on Antarctic Names for William H. Hyde, an ionospheric scientist at Little America V Station in 1958.

Mount Terra Nova is a snow-covered mountain, 2,130 m (6,990 ft), between Mount Erebus and Mount Terror on Ross Island. It was first mapped by the Discovery expedition in 1901–04, and named for Terra Nova, the relief ship for this expedition and the British Antarctic Expedition, 1910–13.

Thomson Glacier is a glacier about 8 nautical miles (15 km) long on Bryan Coast flowing between Rydberg and Wirth Peninsulas into Fladerer Bay. Named by Advisory Committee on Antarctic Names (US-ACAN) after Janet W. Thomson, British Antarctic Survey, head of the mapping operations from the 1980s to 2002, and member of the USA-UK cooperative project to compile Glaciological and Coastal-Change Maps of the Antarctic Peninsula.

Tombstone Hill is a prominent hill on the north side of Edisto Glacier in the Admiralty Mountains, Victoria Land. Its summit is littered with slabs of hard sedimentary rock, many of which are steeply tilted on end to give the appearance of a field of tombstones. Named by New Zealand Geological Survey Antarctic Expedition (NZGSAE), 1957–58.

Bishop Glacier is a glacier flowing southwest into the Mozart Ice Piedmont, situated in the northwest portion of Alexander Island, Antarctica. This feature was named by the United Kingdom Antarctic Place-names Committee (UK-APC) in 1980 after James Francis Bishop (1950-1980), a former glaciologist of the British Antarctic Survey (BAS) 1972–78, who worked in Alexander Island, 1973–75. He was killed in the Karakoram Range, Pakistan, on July 14, 1980, at this time, he was a member of Royal Geographical Society International Karakoram Project.