Three Shadows was founded in June 2007 by RongRong, from China, and inri, from Japan. [3]

Three Shadows supports and facilitates exhibitions, education programs, publications, programs for artists, and independent events and engagements. Its mission is to:

Three Shadows has an Artist-in-residence program to provide international photographers, artists, curators, and academics with an opportunity to live and work in China. Such artists have been among others Nirmala Karuppiah, Ken Kitano [4] and Sascha Weidner. [5]

Zhang Dali is an artist based in Beijing.

798 Art Zone, or Dashanzi Art District, is a complex of 50-year-old decommissioned military factory buildings boasting a unique architectural style that houses a thriving artistic community in Dashanzi, Chaoyang District of Beijing. The area is often called the 798 Art District or Factory 798 although technically, Factory #798 is only one of several structures inside the complex formerly known as 718 Joint Factory. The buildings are within alleys number 2 and 4 on Jiǔxiānqiáo Lù (酒仙桥路), south of the Dàshānziqiáo flyover (大山子桥). The area is anchored by the UCCA Center for Contemporary Art, the largest and most visited venue in the area. In recent years, it has been the main venue for the annual Beijing Queer Film Festival and Beijing Design Week.

Photography in China dates back to the early 19th century with the arrival of European photographers in Macao. In the 1850s, western photographers set up studios in the coastal port cities, but soon their Chinese assistants and local competition spread to all regions.

Xu Jingyu许静宇(1981-) is a Chinese contemporary artist. Her work includes installation art, sculpture, photographs, paintings, performances. She is one of the Chinese artists active in the field of contemporary art.

Caochangdi was an urban village and renowned arts district located in the Chaoyang District of northeast Beijing at the intersection of the 5th Ring Road and Airport Expressway. Translated as "grasslands" in Mandarin, Caochangdi was home to a diverse group of residents, including migrant workers, farmers, students and artists, most notably, Ai Weiwei. Caochangdi developed into a thriving arts and cultural hub when artists began to move into the area around 2000, attracting international attention similar to the nearby 798 Art Zone. Demolition of the village began in July 2018.

Chambers Fine Art is an art gallery based in New York City and Beijing that specializes in Chinese contemporary art. Opened in New York in 2000 by Christophe Mao. Notable Chinese artists who had their first solo show in the United States at Chambers include: Lu Shengzhong, Shi Jinsong, Hong Hao, Qiu Zhijie, Hong Lei, and Chi Peng.

The Beijing East Village was an avant-garde artistic community of the early 1990s located in the eastern part of Beijing, just past the Third Ring Road on what was then the city's margins. It was formed in 1993 when a group of like-minded artists took up residence together in a "village" of low-quality migrant worker housing, fixing at the entrance a handwritten sign. Their community's name was inspired by the East Village of Manhattan, with which they felt an affinity in their experimental aesthetics. Only the year after its founding, following the arrest of Ma Liuming for cooking naked in a courtyard, the community was closed by the police, though former residents continued to collaborate.

Hong Lei is one of the leading artists in the era of China's New Photography movement in the 1990s.

Bogdan Konopka was a Polish photographer and art critic, who began taking photographs in the mid-1970s. Born in Dynów, Poland he moved to France in 1989. In 1998 he was awarded the Grand Prix de la Ville de Vevey in the European Photo Competition. Receiver of numerous scholarships e.g. Pro Helvetia, the City of Paris (1994), the French Embassy in Beijing (2005), the French Cultural Institute in Romania and Belarus. Author of the famous exhibition Paris en gris (2000) at the Polish Institute in Paris and The Invisible City (2003) at the Centre Pompidou. Bogdan Konopka preferred to work primarily on large format view camera.

Diana Lui is a Franco-Belgian artist, photographer and filmmaker of Chinese origin. Diana Lui is best known for her large format photographic portraits of today's growing hybrid generation of multicultural and multiethnic individuals.

Almond CHU is a Hong Kong-based artist and photographer, known for his black and white photographs and large format conceptual color images. 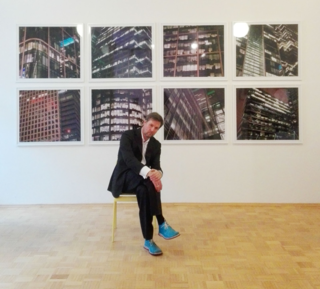 Andreas Schmidt is a Berlin based artist and gallerist.

Zhu Lan Qing,, is a contemporary Chinese photographer and now living in Taipei. She graduated with a master's degree from the Department of Photojournalism at Renmin University of China in 2012 and moved to Taiwan to study at the Institute of Applied Arts in Fujen Catholic University.

Wang Wusheng was a Chinese photographer known for his black-and-white photographs of Mount Huangshan.

Zhang Kechun born in 1980 in Sichuan province is a Chinese artist and photographer. He is known for his photographs dwelling on the significance of the landscape in modern Chinese national identity. He currently lives and works in Chengdu, China.

Stefen Chow a Singapore-raised photographer and artist based in Beijing, China. His work is widely published and exhibited internationally. In 2013, Chow's portrait of iconic Chinese artist and activist Ai Wei Wei was awarded at the World Press Photo. Chow frequently collaborates with economist Hui-Yi Lin using extensive data and research to produce long term visual projects. One of their prominent projects is “The Poverty Line", a visual project that contextualizes global poverty. The Museum of Contemporary Photography in Chicago and the Central Academy of Fine Arts Museum in Beijing has acquired works to their permanent collection.

John Fleetwood, is a South African photography curator, educator who was from 2002 to 2015 director of Market Photo Workshop and has since 2016 been director of Photo: in Johannesburg.

Lukas Birk is an Austrian photographer, archivist, and publisher. He is known for a visual archive work in Myanmar and research on Box Camera photography in Afghanistan. Birk has worked on photographic projects, films and visual research in China, South and South-East Asia and the Indian subcontinent. He has published numerous books on visual culture and photographic history.