Three Sixty West is a skyscraper complex in Mumbai, Maharashtra, India. [7] It comprises two towers, joined at ground level by a podium. Tower B, the taller of the two, rises to 260 metres (853 ft) with 66 floors [8] and Tower A rises to 255.6 metres (839 ft) with 52 floors. [9] Tower A is a hotel, and private residences are located in Tower B. The podium accommodates amenities such as restaurants and ballrooms. [10]

The project was designed by Kohn Pedersen Fox. [11] The structural consultant is LERA (Leslie E. Robertson Associates). [12] and the main Contractor is Samsung C&T. Hotel interiors are done by Tony Chi and Associates. Residents' amenities are designed by Populous.

The project was developed under Oasis Realty, a joint venture between Sahana and Oberoi Realty. It became the current tallest building in India when completed. [13] In May 2014, [14] Oberoi Realty announced The Ritz-Carlton as the hospitality partner for the project. The Ritz-Carlton Mumbai occupies Tower A, and the private residences in Tower B have access to certain services from the hotel. 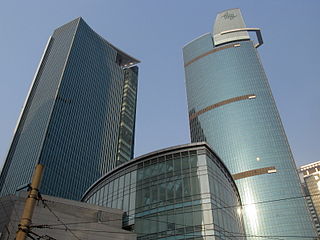 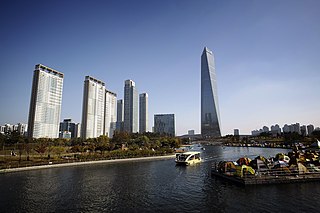 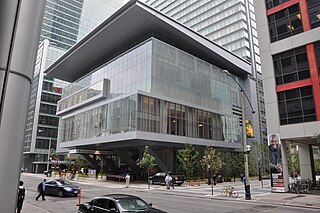 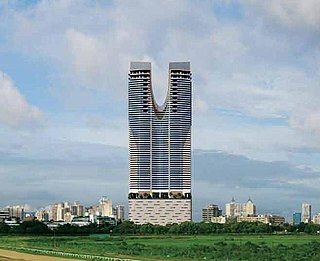 Lokhandwala Minerva is a 79-floor supertall skyscraper under construction in Mumbai, Maharashtra, India. It will have two towers of 79 floors, each of which will encompass parking floors from 5th to 13th, two triple-heighted levels of World Class Amenities from floors 14th to 19th, 5-heighted open-to-sky Podium Landscape Garden on 20th floor with 2 Banquet Halls through floors 20 to 24 and a service level on the 25th floor, residential floors from 26th to 77th, and two penthouses from floors 77 to 79. There will be a transfer girder on level 50 and a service level right above that on level 51, dividing the tower into two separate configurations: 3 BHK's below and 4 BHK's above.

Lodha Park is a 17.5-acre luxury residential skyscraper project which has been developed by the Lodha Group in the upscale Worli neighborhood of Mumbai, India. The land for the project was purchased from DLF Limited in 2012 for ₹2,800 Crore approximately. Lodha Park consists of 5 towers which stand at a height of 268 meters with 76 floors each.