Three Southern Banks (Chinese :南三行) referred to the three most capitalized commercial banks in the south of Yangtze River in the Republic of China in the 1920s, in contrast to the Four Northern Banks (北四行) of Northern China. With their headquarters in Shanghai, the three banks cooperated to form the group.

The Republic of China (ROC) was a sovereign country that existed between 1912 and 1949 in Mainland China, which is now controlled by the People's Republic of China. It was established in January 1912 after the Xinhai Revolution, which overthrew the Qing dynasty, the last imperial dynasty of China. The Republic's first president, Sun Yat-sen, served only briefly before handing over the position to Yuan Shikai, the leader of the Beiyang Army. Sun's party, the Kuomintang (KMT), then led by Song Jiaoren, won the parliamentary election held in December 1912. However, Song was assassinated on Yuan's orders shortly after; and the Beiyang Army, led by Yuan, maintained full control of the Beiyang government. Between late 1915 and early 1916, Yuan Shikai was the self-proclaimed Emperor of China before abdicating due to popular unrest. After Yuan's death in 1916, the authority of the Beiyang government was further weakened by a brief restoration of the Qing dynasty. Cliques in the Beiyang Army claimed individual autonomy and clashed with each other during the ensuing Warlord Era.

Four Northern Banks referred to the four most capitalized commercial banks in the north of the Yangtze River in the Republic of China in the 1920s, in contrast to the Three Southern Banks (南三行) of Southern China.

The three banks were The National Commercial Bank (浙江興業銀行), the Chekiang Industrial Bank (浙江實業銀行) and the Shanghai Commercial and Savings Bank (上海商業儲蓄銀行). [1]

The National Commercial Bank Limited, also known as Zhejiang Xingye Bank, was a Chinese bank. It is now merged to Bank of China.

The Shanghai Commercial and Savings Bank is a bank of the Republic of China, established in Shanghai, mainland China in 1915, by Chen Guangfu, better known as K. P. Chen. Mr. The-Chin Chuang was elected the first chairman, and the founder, Mr. Chen, was the first president. The bank is currently based in Taipei, Taiwan.

The Industrial Bank Co., Ltd. is a commercial bank based in Fuzhou, Fujian province of the People's Republic of China. 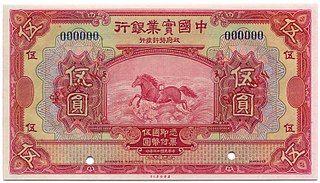 National Industrial Bank of China was a bank established in September 1915 in Tianjin. It moved its headquarters to Shanghai in 1932. The bank provided funding for the KMT government in Shanghai's various projects around the city, and also issued bank notes. The bank merged with Bank of Communications in 1935, although its branch in Hong Kong remained in operations under the National Industrial Bank name until 1954.

During the 1990s and 2000s, China's banking system underwent significant changes: banks are now functioning more like Western banks than before. Nevertheless, China's banking industry has remained in the government's hands even though banks have gained more autonomy. China is now a member of the World Trade Organization, as of 11 December 2001. The central bank of China is the People's Bank of China.

The China & South Sea Bank Limited (中南銀行) was established in 1921 in Shanghai as a commercial bank. It was founded by Huang Yizhu (黃奕住) and Xu Jingren (徐靜仁) who were overseas Chinese from Indonesia. The bank became one of the few Chinese owned banks to gain public confidence and its banknotes were widely circulated in Shanghai and Hong Kong. The bank continued its mainland operations until September 1951, when its assets were nationalised by the government of the People's Republic of China. 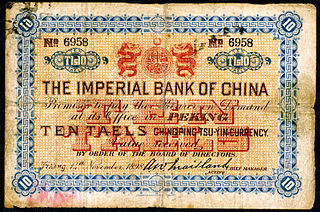 The Mega International Commercial Bank is a subsidiary of Mega Financial Holding Company. It is one of the banks in Taiwan with 105 branches in Taiwan and with 17 branches, two representative offices and two wholly owned subsidiaries abroad. The bank's total workforce is over 5,100 and its aggregate paid-in capital is approximately NT$64.1 billion.

China State Bank was a bank in China.

Hua Chiao Commercial Bank was a bank in Hong Kong. It was established in Hong Kong in 1962 by several Indonesian Chinese. After 1965, it became a member of Bank of China Group. It was involved in remittance and deposit account businesses, but it switched to export and import trading loan, international settlement after the 1970s. In 2001, it was merged to form Bank of China.

HSBC Bank (Taiwan) Limited is the foreign bank to incorporate locally in Taiwan since 2009. It is part of the HSBC Group and is wholly owned by Hong Kong-based The Hongkong and Shanghai Banking Corporation Limited.

The E.SUN Commercial Bank, Ltd. (Commonly known as E.SUN Bank is a bank headquartered in Taipei, Taiwan. Its president is N.C. Huang.

The KGI Bank is a commercial bank of Republic of China, Under the China Development Financial Holding Corporation. Its Headquarter is located in Zuoying District, Kaohsiung, Taiwan, Republic of China.

Zhejiang Chouzhou Commercial Bank is an urban commercial bank headquartered in the international trade city of Yiwu, Zhejiang Province, China. Established in 1987 as the Yiwu Chouzhou Credit Cooperative, it was transferred to a joint-stock company in 2005 and converted to Zhejiang Chouzhou Commercial Bank in 2006. In 2018 it was included into The Banker's Top 1000 World Banks list. and has received awards from local and national governments. The bank provides finance to small and medium enterprises in Yangtze River Delta Economic Zone of China. It sponsors the Zhejiang Golden Bulls basketball team.